‘We had to keep going’: After COVID setbacks, Navajo police chief looks forward 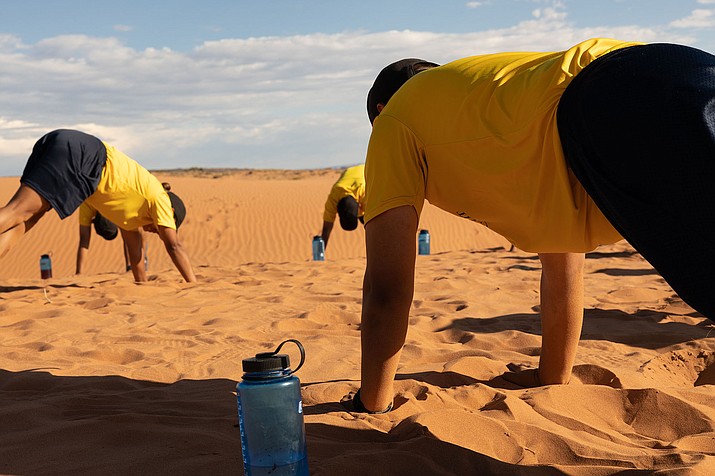 Navajo Nation Police recruits stretch after running on sand dunes for physical training in Chinle, Arizona, on the reservation. A recent report said the 200-member department needs hundreds more officers to do its job. (Beth Wallis/News 21)

WINDOW ROCK, Ariz. — Navajo Chief of Police Phillip Francisco sits ramrod straight at his desk, surrounded by manila folders brimming with paperwork and a Darth Vader figurine that wields a pen as a lightsaber.

The chief, an Army veteran hired in 2016 after serving in several law enforcement departments in New Mexico, took charge after nearly eight years of rotating acting chiefs. He came from Farmington, New Mexico, to serve and protect the largest Native American tribe in the U.S. Francisco, 45, whose father is Navajo, grew up near the reservation.

A year before Francisco was sworn in, Officer Alex Yazzie was shot and killed while answering a domestic violence call. Francisco — who had been working closely with the Navajo Police Department while serving at nearby agencies — felt called to step in.

“Seeing the struggles that the Navajo Nation Police Department went through, I thought, ‘Maybe they need a leader.”’

The increased demands of the COVID-19 pandemic exacerbated issues in the department, Francisco said: chronic understaffing, dispatch systems that trail technology by 50 years and archaic facilities that include 71-year-old administrative buildings and a converted post office.

The 200-member department polices a rural area larger than West Virginia, he said, with dirt roads and houses so remote they don’t have addresses and can be out of range of police radios. During the pandemic, officers often worked 16- to 24-hour shifts to fill in for sick or quarantined colleagues.

Francisco and his department commissioned a study, released this spring, by the Boston consulting group Strategy Matters that recommends the department needs 500 to 775 personnel to handle services, which range from domestic violence and public intoxication calls to reinforcing the reservation’s COVID-19 curfew and distributing personal protective equipment.

Francisco said COVID-19 changed the department's day-to-day functions in multiple ways, including that officers were required to keep going while other departments were closed. The department needed to safely arrest people, which included every arrestee having to go through a hospital.

After leading the department through the height of the pandemic, Francisco now hopes the federal government’s most recent COVID-19 relief bill, the 2021 American Rescue Plan Act, will help pay for some of the department’s critical needs.

"A helicopter even, because we were responding to all kinds of areas, and we had to get PPE to those areas and get the officers to areas quicker. (The Navajo reservation is) so large that I think that a helicopter would have been essential to drop off supplies, pick up supplies and drop off officers, respond to medical situations, and transport people out.," Francisco said. "We also have a lot of missing people that are injured. But in the end, all we got was some of our hazard pay paid for and a small amount of money for PPE."

Francisco said. he hopes that American Rescue Act funds, we can address some of the buildings that police officers use.

Another hope Francisco has is to fund dispatch centers.

"To build two consolidated dispatch centers instead of having seven, so we can pool our resources of dispatchers, be more effective and actually implement the (Enhanced 911) system," he said. "We also have some plans to upgrade our radios to new digital radios. More cellphone equipment and connectivity in our vehicles out in the field to go with our dispatch center."

Editors note: This story has been cut and edited for clarity and length.