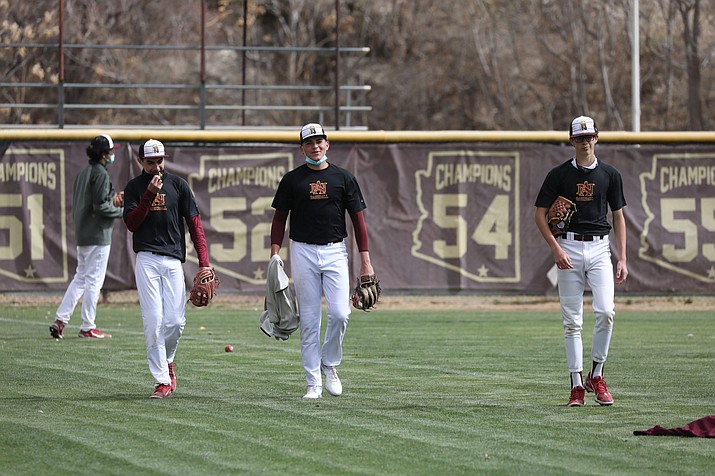 Principal Tim Colgate said Nogales High School does not have an official relationship with the Apache people but that he has not encountered any pushback about the team’s nickname. (Alina Nelson/Cronkite News)

PHOENIX — For opponents of Native American mascots in the Southwest, 2021 has been a banner year.

In Nevada, Gov. Steve Sisolak signed a bill on June 4 prohibiting the use of “racially discriminatory imagery” in any school’s “name, logo, mascot, song or other identifier.” His Colorado counterpart, Gov. Jared Polis, followed suit at the end of the month by authorizing a ban on Native American mascots in schools that don’t have a relationship with a tribe.

The broader national climate shifted as well July 23: Following in the footsteps of the Washington Football Team, MLB’s Cleveland Indians adopted a new name — the Guardians — after lengthy public debate.

In Arizona in 2018, then state Rep. Eric Descheenie, D-Chinle, introduced a bill targeting the Washington NFL team, prohibiting the display of team names that tribes deemed disparaging in publicly funded facilities. He said the bill was never assigned to committee and “died upon arrival.”

Now, amid the mounting legislative action in neighboring states, does Descheenie think the issue would go over any better in Arizona?

“No, I think it would be worse,” he said, noting “extreme” politics in the state.

The Republicans who control the Legislature aren’t willing to have difficult conversations about such topics as Native American mascots, Descheenie said.

“(For them) it’s about preserving power,” he said. “It’s not about growing the intelligence of our public so that we all benefit from cutting-edge ways of thinking.”

Descheenie said his 2018 bill, focused on the application of tax dollars, was influenced by the contemporaneous Red for Ed campaign for more school funding. Through the Arizona Sports and Tourism Authority, he argued, taxpayers were subsidizing the promotion of the Washington team name at the time, e.g., through the printing of tickets, when the team visited State Farm Stadium to play the Cardinals.

“If the bill were to become law, then certainly the next step would be, we need to take a look at our public institutions because this is no different,” Descheenie said.

Native American iconography plays a role in Arizona scholastic sports, as public high schools on and off reservations still use the former Washington nickname (Red Mesa and St. Johns), Apaches (Fort Thomas and Nogales) or Braves (San Carlos). They vary demographically: According to 2019-20 data from the National Center for Education Statistics, students at Fort Thomas, San Carlos and Red Mesa were more than 90% American Indian/Alaska Native (with Red Mesa at 100%). St. Johns was at 8%, and Nogales listed no students in the American Indian/Alaska Native category.

Principal Tim Colgate said Nogales High School does not have an official relationship with the Apache people, and there have been no recent conversations about the name among students or faculty. In the past, he said, the school has received letters of support, and its band has been invited to tournaments on the basis of the team name.

“It is our mascot, and we’ve always worn it with a lot of pride,” he said, “and made sure that we are always living up to those expectations.”

The school considered changing its mascot 25 years ago, before Colgate’s tenure. Other high schools with the Apache name, such as California’s Vallejo High School, have previously done so.

“I can’t comment on other states or the schools or other relationships,” he said. “I know that this has always been a very positive relationship in any dealings that we’ve had, and we will continue to keep it that way.”

Descheenie chose to target the NFL with his bill because of its economic power: “We’re not going to take the entire Christmas tree, we’re only going to take certain ornaments.”

But Washington has since dropped its name, and the topic hasn’t returned to the Arizona Legislature. Descheenie drew a comparison to the modern discourse around racial issues in education.

“When it comes to things like critical race theory, or this issue of racist mascots and the ill effects that it has on Native American populations, particularly the younger population, they’re not going to go there,” he said.

These ill effects, Descheenie added, are felt in Native American communities through such issues as water access, school graduation rates and the self-esteem of Native youth in general.

Not all Native Americans agree the names and logos are racist, arguing that Indigenous people gain self-esteem from such representation. The nonprofit Native American Guardians Association represents them.

Jonathan Tso, a group leader who previously co-founded a fan club for the Washington NFL team in the Four Corners region, fondly recalls encountering Native iconography when he played basketball.

“That Native image that’s in the middle of that basketball court at that high school makes me feel proud,” Tso said, “knowing that people represent us and people take pride in Native Americans.”

Tony Henson, a fellow leader from Illinois, said the group opposes “blatantly cartoonish caricatures” but otherwise considers Native imagery, coupled with comprehensive education on Native cultures, as a way of keeping Indigenous people in the public eye. The association is trying to sue Colorado over the new law on First and Fourteenth Amendment grounds.

“They’re taking that right away from individual Native Americans who are going to be denied that opportunity to be lionized in the way that we lionize our founding fathers,” Henson said.

I think getting education straight from the source would be a really good thing,” said Crystal Tso, Jonathan’s wife and a fellow group leader.

Jonathan Tso acknowledged it “kind of does hurt a little bit” to see people wearing a war bonnet at Washington’s football games, but he said education can teach them about when bonnets are supposed to be worn.

However, the group doesn’t want such partnerships to be required, as the Colorado law does.

“We don’t think that these sovereign tribes and these individual school communities should have to get the approval from anyone,” Henson said.

He approves of partnerships for names that refer to a specific tribe, such as Utes, but because the honored warrior class to which many generic team names pay tribute no longer exists, he said, no group has ownership over it.

The Native American Guardians Association argues that these laws constitute an erasure of Native American culture and place a financial burden on schools. As legislative efforts have ramped up across the country, the association repeatedly has equated the removal of these team names with “cultural genocide” and linked it to cancel culture.

“I think the momentum off of last year, with the Black Lives Matter and everything that converged all at one time,” Henson said, “created an opportunity for the activists to get in there and have their best leverage point with these politicians.”

There has been some recent change in Arizona: Thunderbird High School in Glendale got rid of its Chiefs name in 2020 after a student-led movement.

“Native American populations are not substantiated by contemporary society,” he said. “They are substantiated in an entirely alternative body of knowledge that is rooted in a place that precedes the existence of the United States of America. … So when it comes to erasure, there is no such thing as it relates to things like mascots. Our existence has nothing to do with those mascots.”