Hopi ranchers ordered to eliminate or reduce livestock during drought 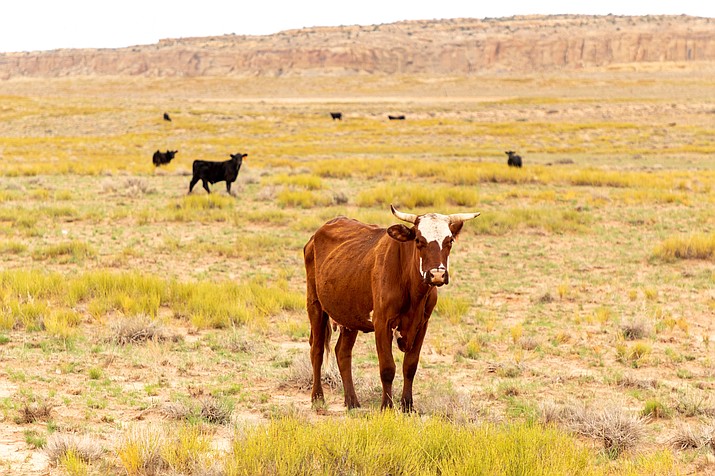 A small group of cattle graze east of the old Coalmine School off Highway 264, which runs through the Hopi Reservation. Because of concerns with the ongoing drought, the Hopi Tribe recently issued a drought declaration requiring ranchers to reduce the size of their herds. (Gilbert Honanie/NHO)

ORAIBI, Ariz. — Despite recent flooding and heavy monsoon rains, an extended drought continues to impact livestock operations on the Hopi Reservation and now, ranchers are being asked by the tribe to reduce or eliminate their herds.

On July 20, the tribe issued executive order 011-2021, a drought declaration for range mitigation and livestock reduction on the Hopi Reservation.

According to the tribe, the reservation has received fewer than two inches of rain this season with little to no new grass or vegetation growth. Stock ponds are dry and some windmills and springs have been operating at just over 50 percent capacity. 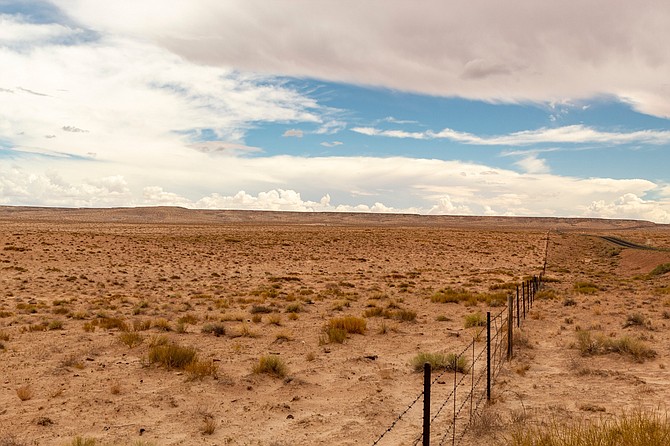 Ranchers have supplied their herds with hay and water since drought conditions have increased. (Gilbert Honanie/NHO)

According to the order, five counties in Arizona, including Navajo and Coconino counties, are listed as being in an exceptional drought state and the U.S. Drought Monitor indicated the Hopi Reservation is experiencing below average seasonal precipitation and above average temperatures that will impact the Southwest over the next several months.

Because of these conditions, the tribe has ordered all livestock owners within the Hopi Reservation to reduce or eliminate the number of livestock in their herds.

How much of their livestock needs to be reduced is based on which range unit ranchers are in.

The Hopi Reservation has been operating on a 30 percent reduction of all grazing allocations since 2018.

Ranchers across Hopi were shocked as news of the order began to spread. 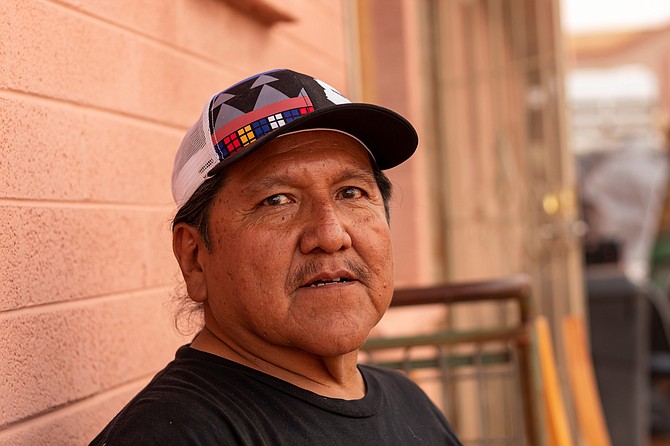 Hopi rancher Lloyd Masayumptewa sits outside his home at Orabi on the Hopi Reservation to share his concerns about the Hopi Tribe's executive order to reduce or eliminate livestock because of drought conditions. (Gilbert Honanie/NHO)

Lloyd Masayumptewa from the Third Mesa Village of Oraibi has been ranching in the area for most of his life. He said the order came as a complete surprise.

“They just kind of threw it on us, it was a surprise. I was really taken aback,” he said.

Masayumptewa said many ranchers are upset because of the lack of communication and outreach from the Hopi Office of Range Management.

“I was pretty upset because we know that we are in a drought and that’s why we were already proceeding to reduce our head count," he said. "What’s most upsetting to me is range management never approached us about any ideas about having to completely sell off all our cattle."

Masayumptewa had 24 head of cattle, but is currently down to 17 head.

According to the order, the tribe will develop and implement long-term mitigation and sustainable range management plans and possible rehabilitation plans during the removal or reduction of livestock.

Masayumptewa said one thing that is most shocking is the tribe's order that some ranchers eliminate 100 percent of their herd.

“There are other range units out there that are in similar conditions but they are not being asked to reduce by 100 percent,” he said.

Masayumptewa said he would like to know what criteria was examined to reach a decision that influenced the order.

“The conditions throughout Hopi are pretty bad, so I think that without really looking at the calculations and what technicians they have out in various fields, if they are looking at things equally...” he said. “We aren’t able to contribute to that. Without any kind of information we’re being told we have to sell off all our cattle."

Masayumptewa has reached out to the tribe for more information but has yet to receive a call back.

Under the order, livestock holders have 90 days to comply. If they don’t comply, Hopi Law Enforcement Services, along with the Office of Range Management and Office of Hopi Land Administration, can enter range units and impound livestock.

Masayumptewa said the order does not give ranchers a lot of options.

“I guess we really don’t have a choice but to proceed with it, they’re threatening to have our cattle impounded,” he said.

Masayumptewa said it has also been upsetting since, over the years, many ranchers have had feral horses on their range units, but range management has not assisted in removing them, which has contributed to overgrazing.

“For them to do something like this without addressing those issues is problematic, as well. They have to really look at themselves as to how they’re doing this business and managing (it),” he said.

Looking forward, Masayumptewa said he hopes to maintain a grazing permit with the tribe for when conditions become more favorable and cattle are allowed once more on the range unit.

“I’m still able to work the cattle — me and my brother, but for some folks who are older this kind of ends their ability to come back and continue that,” he said.

According to Masayumptewa, the tribe has not offered to assist ranchers with finding buyers for their livestock.

“They probably expect us to take them to Sun Valley or Prescott,” he said. “They should provide range management folk to come out and help load our cattle and take them to auction for us if this is what they want.”

Masayumptewa said the tribe should have a meeting with ranchers to explain to them permit plans and assistance for the future.

“I think they still can reevaluate the situation and have a meeting with us to tell us if they have any plans or ideas for the future — for us that they’re asking to reduce by 100 percent,” he said. “This is not the Hopi way, people keep talking about the Hopi way and this is not good business if you are Hopi.”