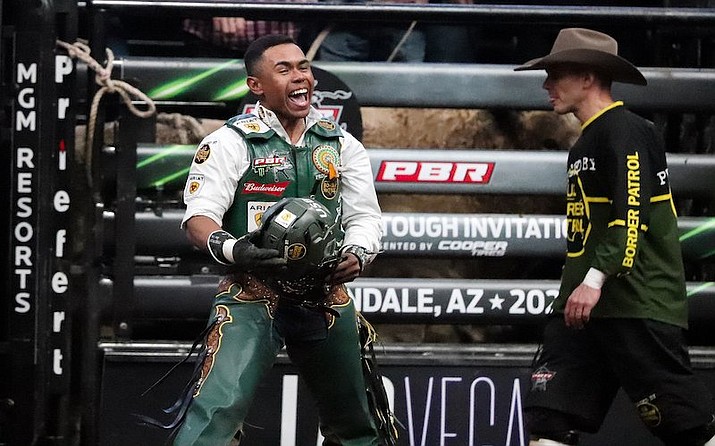 Keyshawn Whitehorse yells and smiles after a 90.25 ride in the final round to secure his firest event win of 2021. (Photo/Marlee Smith)

GLENDALE, Ariz. — It might have been the optics, but whenever professional bull riders Keyshawn Whitehorse and Cody Jesus entered the ring, the crowd seemed louder, more engaged. In fact, Gila River Arena appeared to shake at the sound of their names as they competed in the Professional Bull Riding competition.

Whitehorse and Jesus are both a part of the Navajo tribe which has deep roots in Arizona. Whitehorse, 23, grew up in McCracken Spring, Utah, and is currently ranked No. 4 in the world, and Jesus, 22, is from Window Rock. While neither rider finished in the top 10 in the Valley event held earlier in March – Jesus was 17th – it was an ideal place for both riders to continue putting their mark on the sport.

When the PBR tour came to Glendale on March 12, competitors had to first finish the final round of the Built Ford Tough Invitational presented by Cooper Tires from Del Rio, Texas, after it was evacuated due to the freak snow storm that hit the state. This is where Whitehorse shone, securing the Del Rio event with a 90.25 final ride and a total score of 177.25. Winning in front of hundreds of Native American fans was a special moment for him.

“I think it was kind of destined to be in that area, to have that finish in Arizona and have such a fan base on my side,” Whitehorse said. “I think all in all it comes down to be very special for me, because of how I finished there with the great fans and I had a lot of my family there.”

An increasing number of Native Americans are participating in bull riding and making an impact. In 2019, a Native American team that featured Jesus and Whitehorse entered the prestigious PBR Global Cup and turned heads. Riders came from Navajo, Chippewa, Cherokee and Sioux and placed third.

The journey isn’t always an easy one. In 2018, Montana bull riding world champion Jess Lockwood was criticized after insensitive messages disparaging Native Americans were posted on his Twitter account.

Finances, too, can be a challenge. The highest poverty rate by race in the United States is found among Native Americans at 25.4%, according to 2018 US Census Data, nearly twice the national average.

Traditionally, the love of bull riding is passed down from a family member, but that’s not always the case. Both Whitehorse and Jesus have atypical stories on how they began.

“The way I got started is when I was little I was sleeping and my dad was watching it on TV one night and I just woke up and sat by him and I was watching it for a while, didn’t say much. And then after a while I told him, ‘I want to do that,’” Whitehorse said.

The next day, Whitehorse’s dad went out and bought him spurs, boots, chaps and a cowboy hat.

Soon after, he went to a rodeo clinic where he worked his way up from riding sheep all the way to riding 2,000-pound bucking bulls in the PBR, the sport’s international jewel.

Jesus grew up liking bull riding but never thought about trying it until he was in the eighth grade and heard some people talking about the competition. He had his eyes on competing in the Olympics for a different sport.

“I was running cross country then and my mind was set on cross country and making the Olympics,” Jesus said. “Then I heard some guys talking about some bull riding and I always liked it growing up, so I woke up one day and said, ‘Mom I want to ride some bulls.’ She said, ‘I think that is the craziest thing ever.’”

Aside from atypical starts into bull riding, Whitehorse and Jesus have something else in common. They are both a part of the Navajo tribe, which spans across three states in the Four Corners area.

The two riders greatly appreciate the support of the Navajo Nation when the PBR comes to areas where the tribe is present.

“Not every day people are able to have that type of support. And so them being able to come out and support us through it, you know, that allows us to have a lot of motivation and purpose behind our rides,” Whitehorse said. “Our Navajo and Native American fans are very supportive. You want to find more success, to bring them joy and stuff. So they have to have that kind of support system from, you know, from the tribe is very, very pleasing.”

Jesus, who missed all of 2020 with groin injuries, is tied for 69th in the world and making strides to move up the rankings. The energy and support he receives from the Navajo nation is incalculable.

“Man, it means the world to me, it ain’t too far. And everybody kind of knows everybody around my reservation,” Jesus said. “So it means a lot. They’re just like family.”