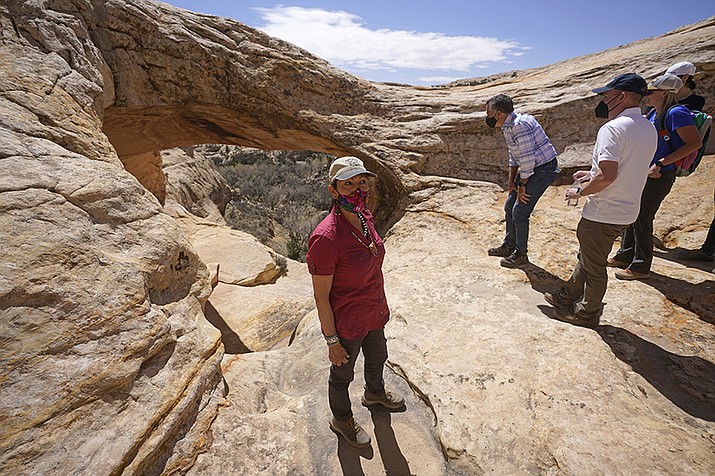 SALT LAKE CITY (AP) — For decades, a public lands tug-of-war has played out over a vast expanse of southern Utah where red rocks reveal petroglyphs and cliff dwellings and distinctive twin buttes bulge from a grassy valley.

A string of U.S. officials has heard from those who advocate for broadening national monuments to protect the area’s many archaeological and cultural sites, considered sacred to surrounding tribes, and those who fiercely oppose what they see as federal overreach.

On April 8, Interior Secretary Deb Haaland was the latest cabinet official to visit Bears Ears National Monument — and the first Indigenous one.

Haaland, a member of Laguna Pueblo in New Mexico, met with tribes and elected officials at Bears Ears as she prepares to submit recommendations on whether to reverse President Donald Trump’s decision to downsize that site and Grand Staircase-Escalante, another Utah national monument.

“I know that decisions about public lands are incredibly impactful to the people who live nearby. But not just to us, not to just the folks who are here today, but people for generations to come,” Haaland told reporters during a news conference in the town of Blanding. “It’s our obligation to make sure that we protect lands for future generations so they can have the same experiences that the governor and I experienced today.”

The visit underscores Haaland’s unique position as the first Native American to lead a department that has broad authority over tribal nations, as well as energy development and other uses for the country’s sprawling federal lands.

“She brings something that no other cabinet secretary has brought, which is that her Indigenous communities are coming with her in that room,” said Char Miller, a professor of environmental analysis at Pomona College.

Miller said the outcome of the negotiations will shed light on how the Biden administration plans to respond to other public lands disputes and will likely impact subsequent conversations with other states on natural resources.

Haaland faces competing interests: Tribes across the U.S. hailed her confirmation as a chance to have their voices heard and their land and rights protected, while Republican leaders have labeled her a “radical” who could, along with President Joe Biden, stunt oil and gas development and destroy thousands of jobs.

Pat Gonzales-Rogers, executive director of the Bears Ears Inter-Tribal Coalition, said he looked forward to Haaland seeking tribes’ input, which he called a “far cry” from her predecessors in the Trump administration.

He noted Haaland is familiar with the landscape — Bears Ears contains many sites of spiritual importance to New Mexico’s pueblos — but acknowledged she had a responsibility to hear from all sides.

“She is the interior secretary for all of us, and that also requires her to engage other groups.”

The coalition wants the monument restored to its original size, or even enlarged, but Gonzales-Rogers said he hoped Haaland’s visit would at least be a step toward a more certainty.

“All parties would like to see some permanence, and they don’t want it to vacillate between either administrations or political ideology,” he said.

Prominent Utah Republicans, including U.S. Sen. Mitt Romney and new Gov. Spencer Cox, have expressed concern with the review under Biden’s administration and demanded state leaders be involved. Haaland met with them, along with Lt. Gov. Deidre Henderson and U.S. Rep. Blake Moore during her visit.

The Utah delegation called on Biden to work with Congress and others toward a permanent legislative fix regarding the monuments’ borders and management, The Salt Lake Tribune reported.

“Can we find the solutions? I think there is an opportunity for that, to provide the resources that are needed,” Cox told reporters. “But all of those things can only be done through legislation. It can’t be done through an executive order.”

Former President Barack Obama proclaimed Bears Ears a national monument in 2016. The site was the first to receive the designation at the specific request of tribes.

Its boundaries were downsized by 85 percent under the Trump administration, while Grand Staircase-Escalante was cut nearly in half. The reductions paved the way for potential coal mining, and oil and gas drilling on lands that were previously off-limits. Activity was limited because of market forces.

Since Trump downsized the monuments, more visitors have come to the sites and put natural and cultural resources at risk, said Phil Francis, chair of the Coalition to Protect America’s National Parks.

“Every day that goes by leaves the irreplaceable resources at Bears Ears and Grand Staircase vulnerable to damage or destruction from looting, vandalism or other threats as a result of lack of protective management,” Francis said ahead of Haaland’s visit.

Haaland will be a key player in deciding what comes next.

She has said she will follow Biden’s agenda, not her own, on oil and gas drilling, and told reporters at a briefing last week that her report to the president will reflect conversations with people who know and understand the area.

The administration has said the decision to review the monuments is part of an expansive plan to tackle climate change and reverse the Trump administration’s “harmful policies.”

But Mike Noel, a former state representative and vocal critic of expanding the monuments, said it would be a mistake for Biden’s administration to “go back and rub salt in the wounds” by reversing Trump’s action.

He said he fears that not allowing local and state officials to make these decisions will only further divide those involved.

“It’s never a good thing when decisions like this are made from Washington, D.C.,” Noel said. “I just think it’s being done wrong, and I hope that the new secretary recognizes that.”