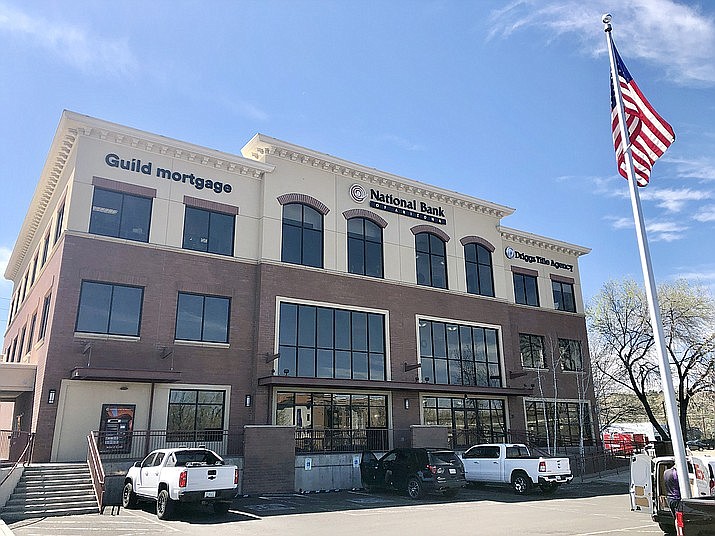 PRESCOTT, Ariz. - A $7.55 million building purchase and another $2.45 million in improvements for a new City Hall location will be up for a vote by the Prescott City Council this week.

During a meeting at 3:30 p.m. Tuesday, April 13, council members will consider an ordinance that would authorize the city to buy the National Bank building, 201 N. Montezuma St., in downtown Prescott from Arma Vista Properties, LLC.

The regular voting session is one of three meetings that the council will conduct on Tuesday. At 1 p.m., a study session will take place for council discussion on a number of issues, including a proposed amendment to the city code regarding cellphone towers.

And at 5 p.m., a closed-door executive session is set for discussion of the Arizona Eco Development annexation negotiations.

The meetings will take place at Prescott City Hall, 201 S. Cortez St., and will also be livestreamed at https://prescott.12milesout.com/live-video.

In addition to the possible authorization of the purchase of the bank building, the council will consider a resolution that would allow the city to borrow $10 million internally from its investment pool to cover the cost of the purchase price and the needed improvements to convert the building into a city hall.

The internal loan would be paid back over a 10-year term at an interest rate of 1.5%.

If approved, the bank building located near the corner of Montezuma and Sheldon streets would replace the city’s 1962-era City Hall at the corner of Cortez and Goodwin streets.

The purchase plan was earlier discussed in closed-door executive session by the City Council and the city’s Facilities Optimization and Property Usage Commission (FOPU).

On April 7, the eight-member FOPU board discussed the proposed purchase in public and expressed unanimous support.

Previously, the commission had spent months reviewing the needs for a city hall and had agreed that an improved facility was needed for a number of reasons, including the deterioration of the Cortez Street building and the need to consolidate city services in a single location.

“Due to the ongoing maintenance and repair costs, the decentralization of many city services, and the inadequate size of the current City Hall to consolidate services and provide enhanced customer service, the City of Prescott should specifically identify a plan to build a new City Hall facility…” stated a FOPU recommendation to the City Council.

The commission had also recommended that City Hall should be maintained in the downtown area, and officials say the Montezuma Street bank building meets that requirement, as well as the recommended 27,000-square-foot size.

If the council members approve the ordinance and resolution, the city would enter a purchase agreement for buying the building. A number of tenants are still operating in the building, including the National Bank, and city officials say the move into the building would be phased.

Tyler Goodman, assistant to the city manager, said the first city department to move would likely be Human Resources, which was slated to move soon into a renovated office in the basement of the existing City Hall from its current location in an annex building along Marina Street.

Recreation Services Director Joe Baynes said Friday that the renovation work on the new Human Resources office in the basement of City Hall was halted several weeks ago when discussions began on a possible purchase of the bank building.

Meanwhile, the city is also working on a request for proposals (RFP) for selling the existing City Hall properties. Goodman said the FOPU Commission would meet again in about a month to further discuss the terms of the RFP.

During a strategic-planning session on Friday, Mayor Greg Mengarelli said the newer, larger building would improve efficiency for city operations and would promote better customer service for the public.

Currently, Mengarelli said, “We don’t have a facility that’s friendly.” He added that he has often seen people walking around the existing City Hall building trying to find the entrance.

City Manager Michael Lamar added that consolidating departments, such as those that deal with construction review (Community Development and Public Works) would also offer better customer service to the community.

In other action at its 1 p.m. study session, the council will discuss a possible amendment to the Land Development Code regarding telecommunications facilities.

The matter has been discussed at three recent Prescott Planning and Zoning Commission meeting, and on March 11, the commission recommended approval of the changes.

The City Council discussed the cell tower issue in October 2020 and gave direction on a code amendment, including mandating that cell towers use stealth design, as well as encouraging co-location as a goal. Stotler said the issue has generated considerable public input in recent months.

A city memo states that the purpose of the amendment includes: encouraging the location of wireless facilities in non-residential areas; minimizing the number of wireless communication sites in the community; and encouraging the joint use of new and existing tower sites as a primary option rather than the construction of single-use towers.

This week’s study session is for discussion, and no vote will be taken.