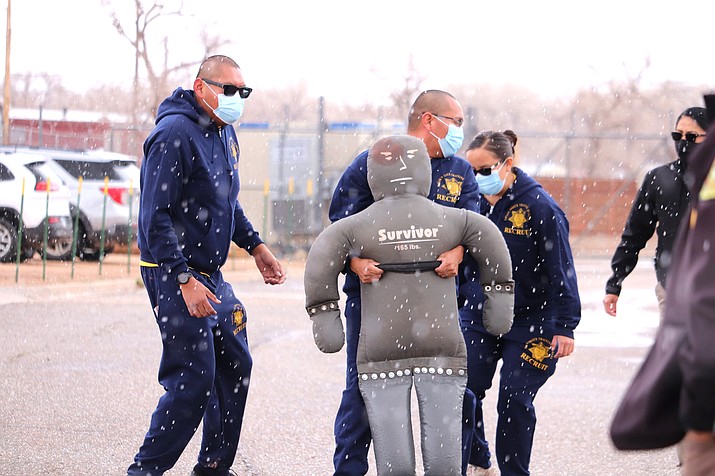 During orientation week, the recruits become familiarized with the facility, staff and are provided training material and equipment.

On April 2, Class 56 recruits had a meet and greet with Chief Phillip Francisco, Deputy Chief Daryl Noon, as well as the district police lieutenants and captains. NPD leadership took the time to share their career background, offer words of encouragement, and provide insight on what to expect.

Recruits also had the opportunity to provide personal background and share their personal goals. Recruits shared that their short-term goal is to graduate from the academy, with many expressing their long-term goal of working hard and obtaining rank for future leadership positions with the Navajo Police Department. 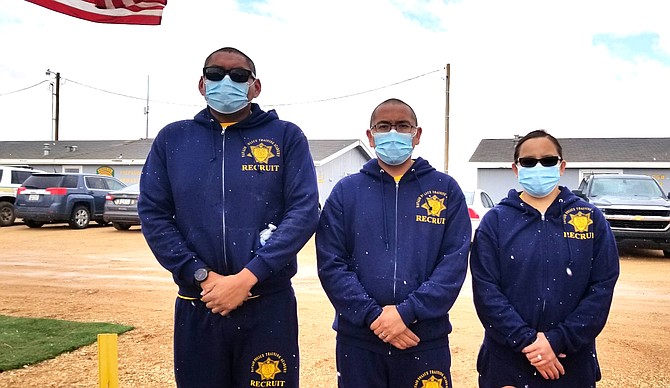 Navajo Police Training Academy Class 56 recruits, Beau Yazzie, Kevin Charley, and Nicole Billy will join 17 of their fellow classmates for orientation week next week followed by the first day of the academy on April 5. (Photo/NNPD)

On April 5, Class 56 will experience their first day of academy training by undergoing a rigorous first day introduction, where they will undergo intense drill activities to test their stress response. First-day activities are a time when recruits face their first intense challenge in becoming a police officer.

Those who remain committed and determined to continue their journey will undergo 26-weeks of training and will be the fifth class to graduate from the Navajo Police Training Academy in September.

Class 56 is expected to graduate in September 2021.

The Navajo Police Department is currently recruiting for Class 57. Anyone interested in a career in law enforcement can contact NPD Officer Wallace Billie at (928) 674-2520 to schedule your appointment.

The next police recruit drive will be on April 23. Recruit drives are by appointment only.

More information is available from NPD Recruiting at (928) 674-2520 or email at wbillie@navajo-nsn.gov

Grant Skeet, Background Investigator at (928) 674-2534 or email at grantskeet@navajo-nsn.gov

Rodney Nez, Adjudicator and Background Investigator at (928) 674-2536 or email at rodneynez@navajo-nsn.gov