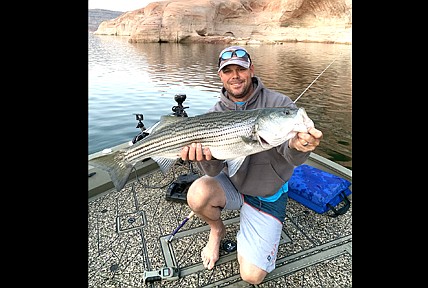 Our annual sampling stations include the San Juan near Piute Canyon, Good Hope Bay near Ticaboo, Rincon, and finally Wahweap. Most of the young-of-year and yearling fish collected in shallow water along the shoreline are Bluegill, Green Sunfish and Smallmouth Bass. Striped Bass are sampled when they venture near shore, instead of residing in open water where they spend most of their time. Our results indicate there was a successful spawn in the spring of 2020. Lack of brushy cover because of declining lake levels allow adult predators to consume more young fish than normal when there is limited brush shelter to hide in.

Our weekly fishing trip was more successful with both stripers and smallmouth bass responding.

We caught smallmouth on small crankbaits cast over a shallow sandbar with a good crop of aquatic weeds (Chara). These weeds are visible in most canyons as the lake continues to decline. Find weeds in a cove or along the shoreline and smallmouth bass will be nearby. Don’t be surprised if a big largemouth bass comes out of the weeds to attack your lure. Surface lures work great very early in the morning and again in the evening. During the day fish deeper. Bigger bass are found in deeper water (20-40 feet). The standard green plastic grubs and Ned rigs continue to entice smallmouth. Look for them in shady rocky areas with a quick drop down to 12-25 feet.

It was rewarding to find some Striped Bass toward the back of the canyon. The pattern now is to troll in 40-80 feet of water looking for shad schools. We found one spot along a large sandstone cliff wall near the back of the canyon where shad schools were abundant and holding from 40-60 feet. We trolled a Strike King 10XD (chartreuse shad color) close to the shad schools and caught some nice 3-4 pound stripers. Next we hovered over the shad schools, dropped spoons to the bottom, speed reeled up and caught more stripers. This technique is working lake-wide. Find shad schools and stripers will be nearby. While trolling for stripers we used another Strike King lure which was a walleye elite Banana Shad. We caught stripers on this 15-foot deep runner (chartreuse shad color). I should not have been surprised to catch walleye on this lure, even though it was midday and we were trolling in deep water. We caught two walleye as well.

Uplake we saw striper boils in Good Hope Bay. Boils were quick. We caught a few fish out of a few small boils but it was such fun to catch fish in boils once again. If looking for top water action then Good Hope Bay is the target. Recent reports indicate White Canyon was the best spot for boils this weekend.

Lake Powell is gradually starting to settle down. Boat traffic is still high mid-morning to afternoon, but it is now possible to get out and have some quiet fishing time both early and late.