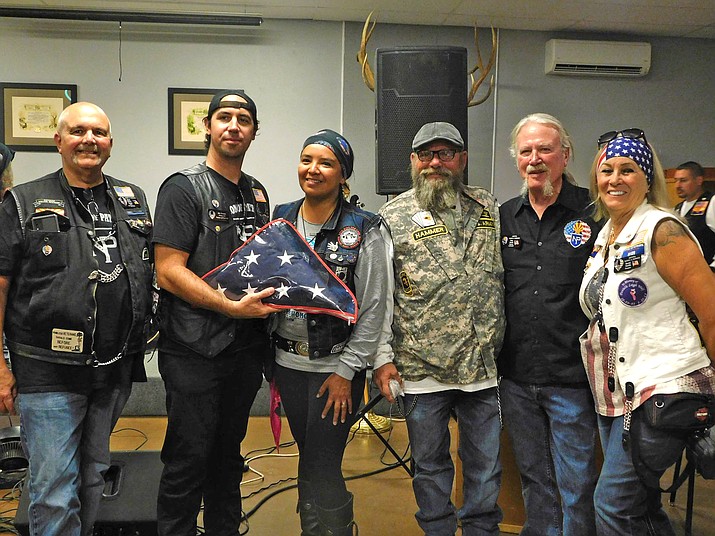 Geri Hongeva-Camarillo (center) holds the Nation of Patriots Flag during its homecoming ceremony Sept. 12 in Chandler, Arizona. Hongeva-Camarillo is the guardian of the Code Talker Flag that is transported throughout the country representing Native American veterans. (Submitted photo)

CHANDLER, Ariz. — As a member of the Navajo-Hopi Honor Riders, Geri Hongeva-Camarillo is on a mission to support veterans past, present and future.

On Aug. 24, Hongeva-Camarillo, was selected to be the guardian of a U.S. flag, named ‘Code Talker flag’.

The Code Talker flag represents all Native American tribes who used their language as a secret code while serving in the military.

It was the Navajo Code Talkers who demonstrated the success of code talking in WWII and in 2001 they were awarded Congressional Gold Medals.

As a Navajo Hopi Honor Rider, Hongeva-Camarillo made her first journey to Washington D.C. in May 2020 with Flags of Honor escorts. On that journey the group had three flags, because of COVID-19 riders could not place these flags at the Vietnam Veterans Memorial in Arlington. The flags continued with the group to the Middle Eastern Conflict Wall in Marseilles, Illinois.

Since then three more flags have been launched, the Code Talker Flag being one of the three, to travel throughout communities, military events, memorials and funeral escorts for veterans.

Since Aug. 24, the flag has been in Arizona, New Mexico and Colorado. It was escorted by Lemual Adson (US Army) during the 18th Annual Lori Piestewa Navajo Hopi Honor Ride Aug. 28 from Window Rock, Arizona to Flagstaff, Arizona to honor all Gold Star Families.

On Aug. 30, the flag was escorted by Mike Kyzer (USMC) with Nation of Patriots to the second highest summit in Colorado, Cottonwood Pass (12,126 feet elevation).

On Aug. 31, it was escorted by Ted DV Hammer (US Army) with ‘Nation of Patriots’ to the highest summit in North American, Pike’s Peak with an elevation of 14,115 feet.

On Sept. 5, the Code Talker flag was escorted by Hongeva-Camarillo by motorcycle to the Vietnam Veterans Memorial State Park in Angel Fire, New Mexico, which is one of the first major memorials to be created in 1971. Hongeva-Camarillo, dedicated that ride to Patrick McCabe, a U.S. Army and Vietnam veteran. Hongeva-Camarillo also rode for Lori Piestewa, the first Native American female killed in combat in 2003.

During her travels with the Code Talker flag, Hongeva-Camarillo asks people to sign the log book as a way for them to express their love for the U.S. and the sacrifice its military men and women.

Hongeva-Camarillo said she is honored to be the guardian of the Code Talker Flag, and proud of the U.S. veterans, her father, uncles, cousins and also her husband, Mike Camarillo Sr. who served with the U.S. Navy.

“It is a small way to show my appreciation for our military families because I will never forget their sacrifice,” she stated.

Hongeva-Camarillo said it allows her to heal because she misses her father every day. When traveling with the flag, she protects and treasures it.