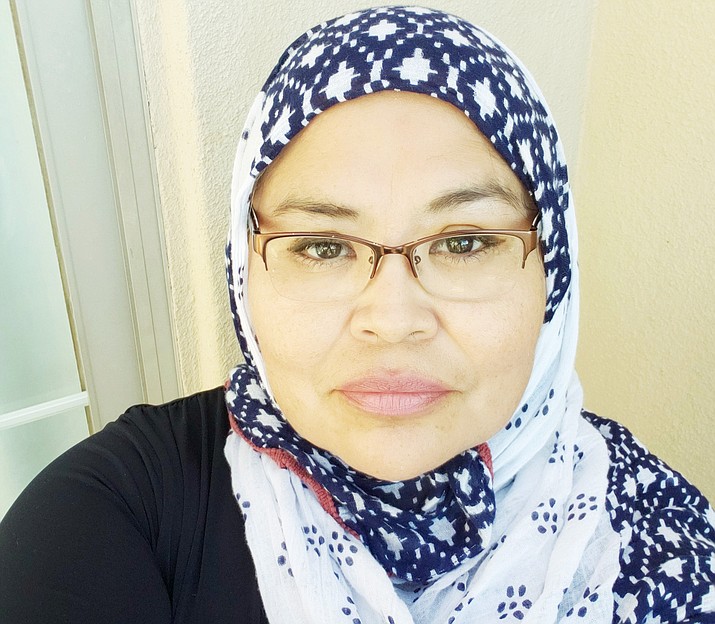 Shawna Ziadah, who co-supervises the birthing center at the Whiteriver Indian Hospital, says mothers on the Fort Apache Indian Reservation live in multigenerational families under a single roof and may feel uncomfortable breastfeeding at home. (Photo courtesy of Shawna Ziadah)

The medical center on the Fort Apache Indian Reservation is one of about 10 hospitals under the Indian Health Service that is classified as “Baby-Friendly,” which means hospital staff are equipped to train new moms on the benefits of breast milk over formula and provide breast pumps and other resources.

Specifically, the Baby-Friendly Hospital Initiative promotes breastfeeding as the exclusive feeding choice for the first six months of a baby’s life. Exclusive breastfeeding, according to the Centers for Disease Control and Prevention, means feeding only breast milk and no other foods or liquids – including formula or water.

Shawna Ziadah, assistant supervisor of the Whiteriver birthing center, said she tries to be “as real as possible” when educating new moms about the challenges of exclusive breastfeeding.

“They’re tired … and I always tell them in the beginning, once you have a baby, you’re never going to sleep until that baby’s 18 and out of the house,” she said.

The American Academy of Pediatrics recommends mothers exclusively breastfeed for six months and then continue to breastfeed for up to and even exceeding two years, while introducing iron-rich foods, such as pureed meats and green vegetables, for optimal health.

Federal statistics show that children who are breastfed are at lower risk of obesity, Type 1 diabetes and asthma, conditions that disproportionately affect Native Americans. For example, Native American teens are 30% more likely to struggle with obesity than white teens.

Direct breastfeeding in particular, as opposed to providing breast milk from a bottle, can help babies self-regulate and better avoid overeating, said Dr. Lori Feldman-Winter, professor of pediatrics at Rowan University in New Jersey and chairwoman of the American Academy of Pediatrics section on breastfeeding.

The health effects of breastfeeding are not exclusive to children, she noted. Mothers benefit, too. Women who breastfeed typically return to pre-pregnancy weight faster, which can shield them from associated health complications, and those health benefits increase over time.

“The amount of protection it can offer mothers to prevent Type 2 diabetes or hypertension, it really does matter to actually continue to breastfeed for two years,” Feldman-Winter said.

Black and Native American infants are breastfed less than white and Hispanic infants, studies show. Although research regarding breastfeeding among Native American mothers is lacking, a 2015 study published in the journal Breastfeeding Medicine said these mothers have lower rates of breastfeeding initiation, duration and exclusivity compared with other racial and ethnic groups, except for Black mothers.

The Baby-Friendly Hospital Initiative, which was launched by the World Health Organization and UNICEF in 1991, is global in scope. The U.S. program promotes a 10-step list of guidelines hospitals follow. Those include having a written breastfeeding policy, helping mothers initiate breastfeeding within one hour of birth and restrictions on giving infants artificial nipples or pacifiers.

The Whiteriver hospital first earned its Baby-Friendly designation in 2014 and again in 2019.

“A lot of people think that breastfeeding is just sort of this natural process and it comes very easily to both the mom and baby, and it really isn’t,” said Dr. Tony Ogburn, chairman of the department of obstetrics and gynecology at the University of Texas Rio Grande Valley.

Until the 1980s, common belief held that formula was superior to breast milk.

The Special Supplemental Nutrition Program for Women, Infants and Children, or SNAP – a federal program that provides support to needy families – gave more financial assistance to mothers buying formula than breastfeeding exclusively, Ogburn said. That has since changed, and mothers who exclusively breastfeed get more help through the program.

“For a lot of people the mentality was … it must be good because the government’s paying me to do it, so I should do this,” he said.

The result was many generations of women who didn’t know how to support young mothers wanting to breastfeed.

“If you don’t have a mom that breastfed and your aunt didn’t breastfeed and nobody knows how to support you, it makes it far more likely that you would continue to (formula feed),” Ogburn said.

In addition to the Whiteriver facility, two other Arizona hospitals are designated as Baby-Friendly, according to the IHS website: Chinle Comprehensive Health Care Facility on the Navajo Nation Reservation and Phoenix Indian Medical Center. Also part of the program are Northern Navajo Medical Center in Shiprock, N.M., and the Gallup Indian Medical Center, where Ogburn once worked.

Because Whiteriver Indian Hospital is baby friendly, mothers often are able to breastfeed relatively easily during their stay, but that can change after they’re discharged, said Laura Gordon, who supervises the birthing center.

“I don’t know if people really realize how much stress these young mothers can be under,” Gordon said. “We don’t always know what their home life is like. Are they going to be supported at home? I don’t know.”

To help mothers maintain healthy breastfeeding habits after returning home, the Whiteriver hospital has two public health nurses who are also lactation consultants. They go out into the community and make home visits upon request.

Ziadah said young mothers have different perspectives on breastfeeding on the Fort Apache Indian Reservation. Some want to formula feed because it’s easier, while others prefer doing what’s most natural.

She speaks from experience. Ziadah has five children, four of whom she breastfed exclusively.

“It was hell, but it was very well worth it,” she recalled.

Two of her children had health issues at birth and had difficulty learning to breastfeed, especially her youngest, who was delivered by cesarean section.

“There were times when I just wanted to give up,” she said, “just having to deal with that pain and deal with him.”

Ziadah said many White Mountain Apache mothers on the reservation live in multigenerational families under a single roof and may feel uncomfortable breastfeeding at home. Because of that, she and Gordon try to make the birthing center as welcoming as possible.

“I always tell them you can always come to us … because we are open 24/7,” Ziadah said.

Feldman-Winter said the adverse effects of giving birth outside a Baby-Friendly hospital are more profound in underserved communities, where there may be less education around the benefits of breastfeeding. But she also noted that bias among health providers within those communities can influence behavior.

“We have to be really in tune with our own implicit bias and really provide equitable breastfeeding care for everyone,” Feldman-Winter said.

Although staff at Whiteriver Indian Hospital encourage all healthy mothers to breastfeed, Gordon said the decision ultimately is the mother’s and always is respected.