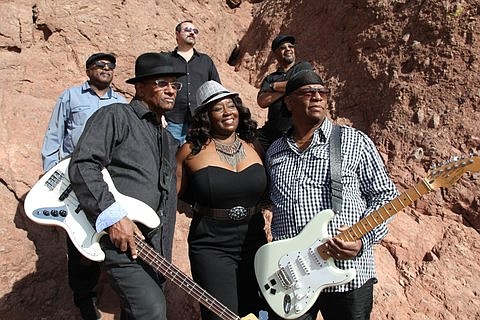 FLAGSTAFF, Ariz. — Bluesman Mike and the Blues Review Band, which has performed fundraisers for Hopi High School journalism department in the past, has a new CD out, "Knee Deep Into These Blues."

Bluesman Mike and the Blues Review Band, which is ranked as the second best blues band in Arizona by Reverb Nation, was one of the busiest bands in the Phoenix area before the pandemic closed down bars and music venues.

Bluesman Mike said "Knee Deep Into These Blues" is one of his band's best CDs.

"We put a lot of work into it. All of the band members had input into that went onto the CD," he said. "I think we nailed it. We used a lot of horns because we had no backup singers due to the covid."

Bluesman Mike and the Blues Review Band sent the CD off to radio stations throughout the state that play blues including 101.5 in Flagstaff. The CD may also get airtime from BB King's Bluesville Radio Station, which is national.

Bluesman Mike said the biggest difference between this CD and their past CDs is that "Knee Deep Into the Blues" has a lot more horns on it.

The 13 song CD has four originals and the rest are cover songs.

"We had four songs that did not make the cut because I didn't like the way they flowed," he said. "We did the cover songs my way — not doing it the way somebody else would do it. We picked songs based on whether we liked the music or lyrics. We just do it different than anybody else."

One song, "Evil," a Koko Taylor original, is sung by Jijjy Vaughan. Vaughan left the band becauses of COVID-19 and has been replaced by Amber Rogers.

Bluesman Mike credits his band members with showing their creative juices in putting together this CD.

"As a band we have grown and come together to produce a real good product. I'm very proud of it," he said.

The first song on the CD is Bobby Rush's "I'm Good as Gone." Bluesman Mike said he was honored to get Rush's approval for them to play the song.

The second song on the CD is the CDs namesake "Knee Deep Into These Blues,” where horns come in and give the listener an idea of the horns to come.

"I wrote the song two or three times before I decided what I wanted. I don't want the songs to be too long because then you don't get radio play or it gets cut," he said.

Bluesman Mike said the band also strived to have dynamic endings to their songs.

The third song on the CD, "Pain," was a collaboration with internationally known harmonica player, Bob Corritore, who is also based in Phoenix.

"Pain" came out great because we let the creative juices flow," he said.

Bluesman Mike said he liked the flow of the arrangements of the songs on the CD.

"Everybody has their interpretation. I think blues should be uplifting, earth shaking. It should be a good mixture. That's why I started with a banging tune," he said.

The last song on the CD is Bluesman Mike's original called "My New Cadillac."

"Everybody who has done the blues has written about their Cadillac, so this song is about my car. It was one of the toughest songs that took a lot of writing and rewriting," he said.

Bluesman Mike hopes to make the world a better place through his music. He doesn't have any songs about politics or anything that might spread hate.

"I just want people to enjoy the music," he said. "I'm a God fearing person who does what's right; I believe good things happen to people who do what's right."