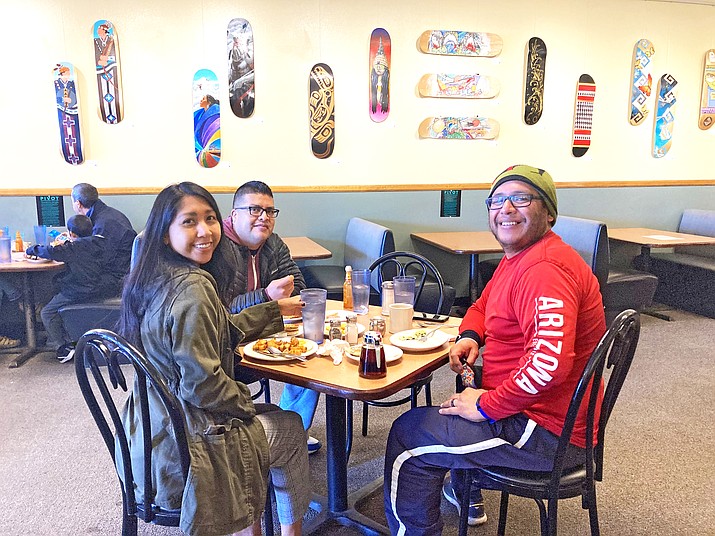 Pivot exhibit manager Samantha Honanie eats breakfast with Pivot creators Duane Koyawena and Landis Bahe at Brandy’s in Flagstaff admist the new pop-up exhbit, which is on display at the restaurant until Nov. 4. (Katherine Locke/NHO)

FLAGSTAFF, Ariz. — The COVID-19 pandemic has hit both the arts and restaurants hard in the past six months, but local Flagstaff restaurant, Brandy’s, is serving up food in a socially distant atmosphere and a pop-up of Pivot, skateboard deck art, hangs on the walls.

There are 35 decks in the pop-up exhibit, which will be up at Brandy’s until Nov. 4.

Pivot exhibit manager Samantha Honanie said there was more than one reason that she and Pivot creators, Duane Koyawena and Landis Bahe decided to showcase some of the art at Brandy’s.

“We thought it was a really good opportunity first and foremost to support artists, especially in the time we are in right now,” Honanie said. “Also, it is a really great way of showing our support for a local business that is so great to local artists, giving them a place to show their art and sell it. Most importantly, it's a way of showing the connection our community has for supporting art.”

But one of the other important aspects of the artwork at Brandy’s is to direct people’s attention to the full exhibit of Pivot that is currently on display at Ft. Lewis College’s Center for Southwest Studies.

“We’re really trying to promote the exhibit itself,” Honanie said.

The exhibit at the Center for Southwest Studies at Ft. Lewis College opened in the spring right as the pandemic hit.

“Opening to the public became a lot different because of COVID,” Honanie said.

While the college is still working on how people can see the full exhibit virtually, there have been a series of artist interviews the college has done that are available on YouTube by searching Pivot: Skateboard Deck Art. 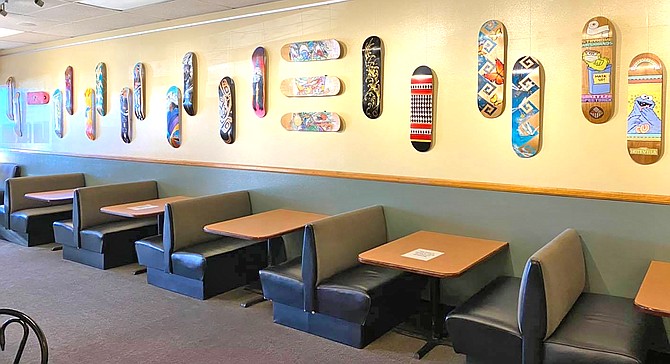 Curators of the exhibit, Koyawena and Bahe say that Pivot refers to the quick transitions indigenous artists make between their traditions and day-to-day life, often working in cities while continuing to contribute to their ancestral communities and homeland.

“As individuals, we’ve learned to shift between these incongruous societies and to integrate them within ourselves,” a placard at Brandy’s reads. “As artists, we’ve developed motifs melding traditional themes with contemporary experiences.”

Honanie said it is important for the exhibit to maintain the momentum the exhibit built from its initial showing at Tat-Fu Tattoo Shop, to the Museum of Northern Arizona, Diné College and now the Center for Southwest Studies and it is important to keep putting in the effort to highlight the work that is going on right now from the artists.

“And then really bringing our perspective to the museum world and the art world and showcasing this moment in time and really trying to keep on the legacy of creative Native art and then the really amazing and distinct perspectives,” Honanie said.

Art in the time of COVID-19

Koyawena said for him personally, he has found a lot of support during the pandemic.

“It feels pretty good, like Samantha was saying, how we’re able to support these other artists and get them on a display and help with their artistic skills, to be able to share their work and possibly make some sales for them,” Koyawena said.

He said that it feels good that all of the artists who were originally a part of Pivot are seeing the movement of the exhibit and that there is such a diversity of art in the exhibit.

“The fact that these places are really wanting [Pivot] to come and be displayed at their facilities, that’s an amazing feeling. It’s really heartwarming,” Koyawena said.

Koyawena points out that a lot of work goes in to organizing and moving an exhibit of Pivot’s size and he credits the work that both Honanie and Bahe have done in moving the exhibit forward.

“The fact that everybody can come and chip in to it, it’s a really good thing to see in the future, how far this thing could go,” Koyawena said. “Just seeing people’s faces when they come into it and not even just the average person, but people who are connected to other facilities, they’re interested in it.”

The exhibit at Ft. Lewis in Durango has only been up and open for two weeks now, but Koyawena said they are already receiving positive feedback.

“It’s really exciting to know that there’s probably going to be more,” Koyawena said. “Even here at Brandy’s, it’s pretty neat to chime in and see how customers are responding. A lot of people are saying there’s been a good amount of people there.” 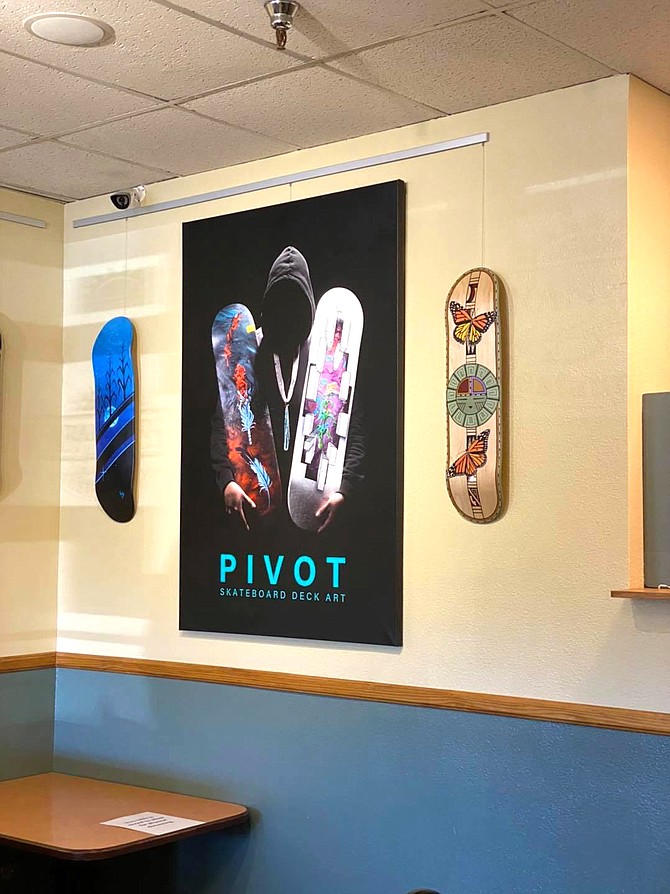 A canvas picture of the Pivot exhibit's original image hangs on the wall at Brandy's. (Photo courtesy of Duane Koyawena)

Bahe credits Koyawena and Honanie for getting the pop-up show together to put up at Brandy’s.

Bahe said seeing the exhibit grow and then going into Brandy’s and seeing part of the exhibit up is moving for him. In fact, he runs into people on the trails who know who he is, partly because of the Pivot exhibit and while he may have no clue who they are, he engages with them.

Bahe strongly encourages people to go by Brandy’s and check out the exhibit and to follow Brandy’s COVID rules.

“It’s beautiful what’s evolving and that’s what Pivot does,” Bahe said. “I just would encourage everyone to down there, if you like that kind of stuff, — art and good food. Go down there and check out what the show is. When you can see that type of quality in this type of show, you know there’s something special that will keep propelling the show forward.”