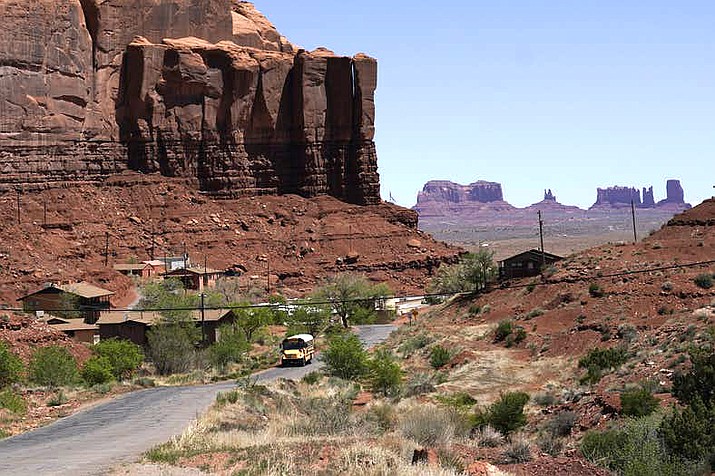 In this April 27 photo, a school bus travels through Oljato-Monument Valley, Utah, on the Navajo Nation. (AP Photo/Carolyn Kaster, File)

WASHINGTON — Schools operated by the Bureau of Indian Education (BIE) on the Navajo Nation will be opening under a distance-learning plan next week, a surprising reversal of the agency’s plans to hold classes in person.

The agency apparently changed course after a discussion between Navajo Nation President Jonathan Nez and BIE Director Tony Dearman. Neither the Navajo Nation nor the BIE have issued public statements about the new plan, and officials did not respond to emailed requests for confirmation or comment.

As reported by Indian Country Today in August, Sweeney wrote, “To the maximum extent possible, BIE schools will operate brick and mortar schools.”

Many tribes, including the Navajo Nation, are ordering reservation schools to offer remote instruction to students.

It remains unclear, however, if BIE-operated schools outside of the Navajo Nation will also offer remote learning.

According to one educator who spoke on condition of anonymity, teachers and administrators at remaining schools are still awaiting direction from the Bureau of Indian Education regarding in-person or remote instruction. BIE-operated schools are set to begin Sept. 16.

Shortly afterward, Alanna Purdy Montesinos, assistant for Lujan, sent an email to Tso in which she wrote, “BIE staff notified me that Director Dearman spoke to President Nez today on this issue and BIE is working with the Navajo Nation in accordance to their Reopening Plan Return to Learn!”

Haaland did not respond to an email seeking comment.

Monica Garcia, Lujan’s communications director, replied that the congressman’s office “was not involved in setting up the meeting you mention.”

Parents with students attending the BIE-operated Tuba City Boarding School received a letter Sept. 10 from the Bureau of Indian Education indicating that “instructional resources (backpacks) will be delivered for each student via bus route. Teachers/learning coaches will make phone contact with students to provide instructional direction regarding materials in the backpacks and information about the upcoming school year.”

The letter goes on to explain that one computer device, iPad or laptop per household will be assigned, and students will need to share.

Several Navajo educators who spoke on condition of anonymity since they were not authorized to speak publicly verified that the more than 30 BIE-operated schools on the Navajo reservation will now offer distance learning. Some voiced concern about the lack of computers and were clearly scrambling to find enough devices to go around.

As the change in BIE policy was unfolding, the House Committee on Natural Resources Subcommittee for Indigenous Peoples of the United States held a remote oversight hearing Sept. 10 entitled, “Examining the Bureau of Indian Education’s school reopening guidance during the Covid-19 pandemic.”

Officials and tribal leaders lambasted the BIE for a plan that seemed to disregard tribes’ wishes and sovereignty.

Democratic U.S. Rep. Ruben Gallego of Arizona, chair of the subcommittee, opened the meeting by criticizing the BIE’s failure to participate in the hearing.

“I would like to voice my disappointment in the BIE for choosing not to testify today. While this committee has often struggled with this administration’s failure to provide timely and informed testimony, the BIE’s refusal to be here today is a new low,” Gallego said.

He described the agency’s refusal to attend the meeting because it was held remotely as a dereliction of the federal trust responsibility with tribes.

Joe Garcia, Ohkay Owingeh Pueblo, co-chair of the education subcommittee of the National Congress of American Indians’ Tribal/Interior Budget Council, said the BIE has a long history of failing to communicate and work with tribal nations, parents and its own employees.

Garcia cited the agency’s refusal to honor the Navajo Nation’s wishes to hold remote education as a prime example.

“If the BIE won’t respond to the Navajo, the biggest Indian nation in the country, how in the world can we expect them to talk to leaders of smaller tribes?” Garcia asked.

With BIE-operated schools on the Navajo Nation poised to begin opening next week, both parents and educators are struggling to navigate the sudden change in plans, wondering if there will be enough computers to go around and adequate internet access on the remote reservation.

“I am all for distance learning but wondering how teachers can teach if my kids only have one computer,” VaLerie Fowler said.

“But I’m thankful for the decision to offer distance learning and for the food that the school will be distributing,” Fowler said.

Mary Annette Pember, a citizen of the Red Cliff Ojibwe tribe, is a national correspondent for Indian Country Today.