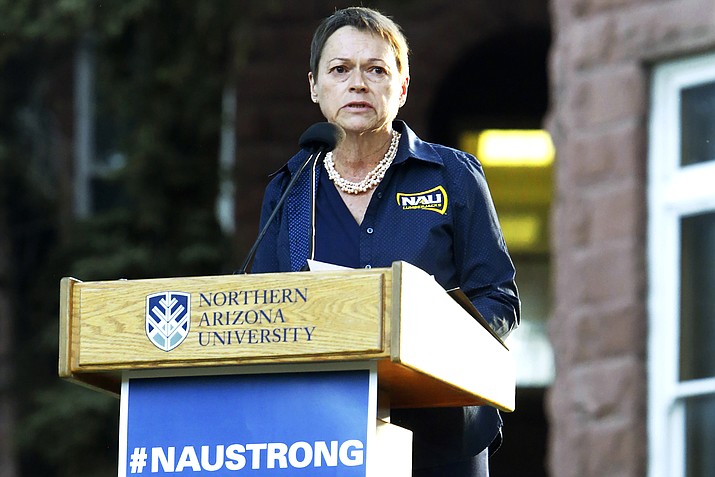 Northern Arizona University President Rita Cheng speaks on the NAU campus in Flagstaff, Arizona, in 2015 to honor the victim and wounded of a deadly shooting on campus. Cheng announced Sept. 8, 2020, she will not seek an extension of her contract, which expires in 2021. (Taylor Mahoney/Arizona Daily Sun via AP, File)

FLAGSTAFF, Ariz. (AP) — Northern Arizona University President Rita Cheng announced Tuesday she will not seek an extension of her contract that expires in 2022.

Cheng touted growth in research funding, enrollment and student retention and diversity since she began overseeing the university in 2014. She said she has confidence in the school's leadership team, faculty and staff to continue the work amid the coronavirus pandemic.

"While there is still a long road ahead, our planning and response to the pandemic — keeping our eyes totally focused on our academic mission and strategic priorities while engaging in the hard work necessary to keep us on a firm, sustainable financial footing — fills me with pride," Cheng said in a statement.

The university recently reopened for in-person classes, against the wishes of a union that represents faculty, staff and graduate student employees.

Earlier this year, Cheng rebuffed calls from a group of students to resign after a state audit found that the university did not comply with policies in paying more than $40,000 in travel expenses for Cheng and her husband. University officials said they believed they were following policies and were unaware the expenses weren't properly documented.

Cheng also faced criticism in May when she announced contracts for about 100 faculty members would not be renewed because of an expected drop in revenue. At the same time, Cheng said she would be taking a 10% pay cut, along with her executive team.

Cheng notified Arizona Board of Regents Chair Larry Penley of her decision not to seek a contract extension in a personal call, said board spokeswoman Sarah Harper. The university said it had no further information on the timing of the decision.

The board said it will start a nationwide search this fall to replace Cheng, who will serve until a successor is named. Cheng's contract expires June 30, 2022. She earns an annual base salary of more than $490,000.

Northern Arizona University Faculty Senate President Gioia Woods said she's grateful Cheng announced her decision sooner rather than later to allow time needed for the search. She thanked Cheng for her commitment to the university and for leading during a pandemic.

In a tweet Tuesday, Gov. Doug Ducey praised Cheng for her "dedicated years of service to our students and the @NAU community."

Cheng, who also was the first in her family to attend college, came to Flagstaff from Southern Illinois University in Carbondale, where she served as chancellor. At the time, Northern Arizona had an operating budget of $460 million with about 26,000 students at campuses statewide and online.