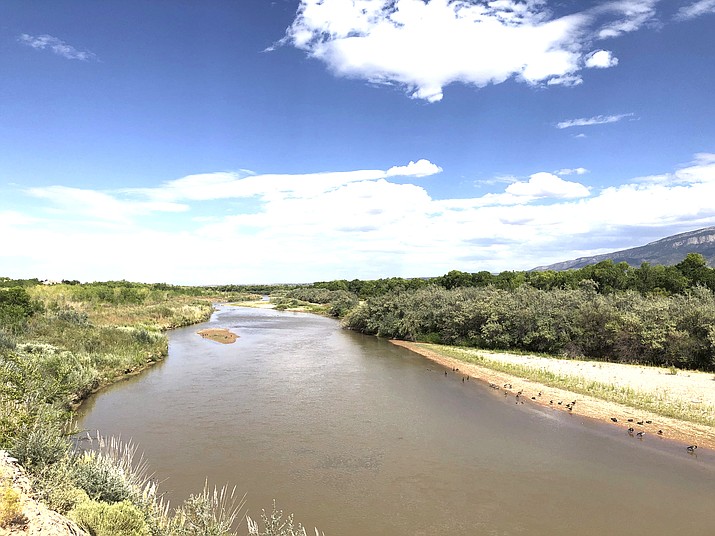 Sand bars and vegetation have helped to narrow the Rio Grande as it flows through Rio Rancho, New Mexico, on Monday, Aug. 31, 2020. New Mexico and other southwestern states have been dealing with dry conditions and warmer temperatures this summer. (AP Photo/Susan Montoya Bryan)

The latest maps show most of the southern half of the region is mired by drought, with extreme conditions centered over much of Utah, Arizona, Colorado and Nevada. In fact, Las Vegas has gone more than four months without measurable rain and Bishop, California — just northwest of Death Valley — has logged 135 thirsty days. Forecasters have created an interactive website to keep track of the dry streak.

The state climatologist in New Mexico says his state has its own problems, where drought has been compounded by an early peak in spring runoff and now a nearly nonexistent monsoon season that has left communities from Dulce near the northern border to Los Lunas in central New Mexico lagging behind for the first eight months of the year.

He warns that many measures — such as precipitation, soil moisture, reservoir levels and stream flows — are all below average around New Mexico. Conditions are similar throughout the Southwest.

"We've gotten a lot of feedback from folks out there in the field and things are not looking good," Dave DuBois, the state climatologist and director of the New Mexico Climate Center at New Mexico State University, said during an online briefing late last week.

The dry conditions already have forced some cities along the Rio Grande in New Mexico to stop diverting water from the river. Stretches south of Albuquerque already have gone dry as the summer rains that officials were hoping for did not materialize. This is supposed to be the time of year that New Mexico gets as much as 50% of its annual precipitation.

The cottonwood forest along the river north of Albuquerque is starting to change colors, with leaves turning yellow and dropping off due to the lack of water. Citing the drought, water utility officials in the city on Monday reported that use is up by more than 1 billion gallons compared to last year.

The dryness has been exacerbated by warmer temperatures. In New Mexico, DuBois said many locations have seen temperatures between 3 and 7 degrees above average.

In Phoenix, the National Weather Service on Thursday logged 50 days in which the temperature reached 110 degrees or hotter. That's the most days since 2011, when only 33 hit that mark.

"Just to be clear, we in no way were celebrating this milestone," forecasters posted on social media. "We were just trying to stay positive even though this summer has been miserable for all of us."

That combination of heat and dryness has led to more evaporation and crispy vegetation. Red flag warnings were in effect Monday around the Southwest.

The outlook for September doesn't appear to bring much relief to the region as probability favors lower precipitation and higher temperatures across much of the region. Drought also is expected to persist through November, and forecasters say it's looking likely that a La Nina weather pattern is setting up for the winter. That typically means drier and warmer conditions for New Mexico.

"Not a lot of good news I'm afraid," DuBois said.