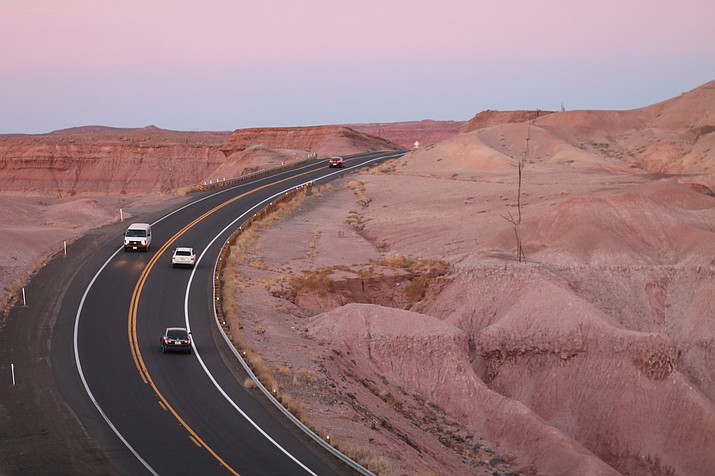 Members of the Navajo Nation are asking the state to count mail-in ballots received from reservation voters after Election Day. Opponents say this would impact the number of votes received by a candidate. (Loretta McKenney/NHO)

PHOENIX — President Trump wants a federal judge to block efforts by members of the Navajo Nation to force the state to count mail-in ballots received from res-ervation voters that are not received until after Election Day.

Legal papers filed by Trump's reelec-tion committee along with various other Republican interests contend that such a move "would unquestionably affect the share of votes that candidates in the stateof Arizona receive.''

Attorney Brett Johnson provides no spe-cific arguments about who would benefit. But he contends that counting late-received ballots "would change the share of votes those candidates receive and give prefer-ence to one specific type of voter over all others.''

But voter registration records suggest the Republicans have reason to worry if more ballots from reservation residents are counted.

Legislative District 7 takes in most of the reservation lands in Arizona, including residents of the Navajo, Hopi, Hualapai, Fort Apache and San Carlos tribes.

There are some non-reservation com-munities like St. Johns and Winslow in the district. But figures prepared when the Independent Redistricting Commission when it drew the lines at the beginning of the decade show that nearly two-thirds of residents are Native American.

The most recent figures from the Secretary of State's Office give Democrats a better than two-to-one advantage in voter registration in the district. The legal move drew deri-sion from O.J. Seamans, co-di-rector of Four Directions, a Native American organization which helped craft the lawsuit.

"I don't feel that the objec-tions that they're making real-ly make any sense,'' he told Capitol Media Services.

"Basically what they're stat-ing is that individuals are going to vote a certain way so we shouldn't allow them equality,'' Seamans said. "That's not what democracy is about.''

That goes to the essence of the lawsuit filed late last month in federal court.

It contends that the slow mail service to and from the res-ervation means that many tribal members get their requested early ballots late, giving them less time to fill them out. Then, complicating matters, it can take close to a week between the time the ballot is mailed from a reservation address to get back to the offices of county election officials.

The result, the plaintiffs charge, is that the system effec-tively disenfranchises people whose ballots do not arrive by the current statutory deadline of 7 p.m. on Election Day. They want a court order requiring counties to tally anything post-marked by that deadline.

That solution is drawing fire from the Donald J. Trump for President Inc. committee along with various national, state and county Republican organiza-tions that Johnson represents.

He pointed out that the proposal means that a ballot from Winslow would have to be received by Navajo County officials by that 7 p.m. deadline but one from Kayenta, on the Navajo Reservation, would get extra time.

"It would treat the ballots of specified citizens different-ly than other similarly situated voters within the same county,'' Johnson wrote.

And he said it would "sow confusion and delay in the administration of the upcoming General Election and all future elections.''

Seamans doesn't see it that way.

He said all the lawsuit seeks is to give all Arizonans equal time to cast their early ballots and ensure that the votes are counted. Seamans said that the studies of mail service have shown that off-reservation res-idents have two-thirds more time to vote than on the reser-vation.

"Regardless of how they try to pain the picture, that's what this is about: equality,'' he said.

Johnson did concede at least some partisan reason for Trump and Republicans interceding.

defendant in this case is Secretary of State Katie Hobbs who is the state's chief elections officer. The lawsuit asks U.S. District Court Judge Murray Snow to order her — and, by extension, election officials in the affected counties — to give the extra time to count ballots from reservations.

Johnson made no secret that the president does not see Hobbs, a Democrat, as [a] friend — and someone who will fight the lawsuit.

"The secretary of state has made clear that her interests are not aligned with those of President Trump with regard to voting by mail,'' he wrote, pointing out that Hobbs recent-ly asked Attorney General Mark Brnovich to investigate whether the Trump administra-tion was making changes in the U.S. Postal Service to under-mine mail-in voting.

"Because the secretary is on record making the same (unfounded) vote-by-mail alle-gations as the plaintiffs, she can hardly be expected to defend the postal allegations in the complaint,'' Johnson wrote, complete with his conclusion that what Hobbs was alleging is unfounded.

Snow has not yet scheduled any hearings on the complaint or the motion to intervene.