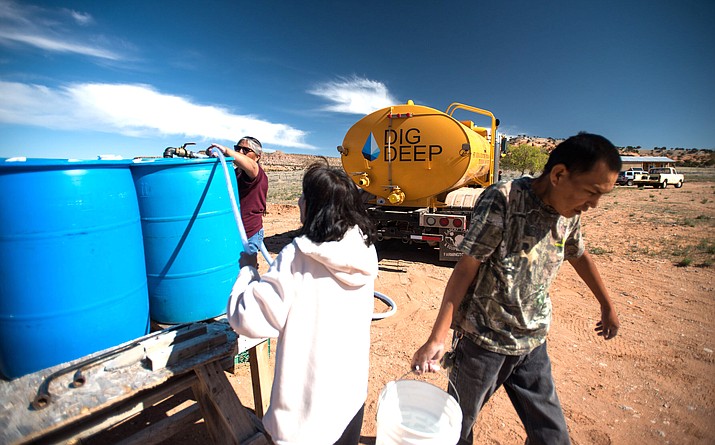 One in three Navajos living on the reservation lack sinks and toilets, according to DigDeep’s Navajo Water Project. That’s a big reason former NFL standout Chris Long is working with the organization. (Photo courtesy DigDeep)

PHOENIX — Two-time Super Bowl champion Chris Long and his founda-tion are donating $100,000 to the Navajo Nation to improve access to water on the reservation.

The money, which will go to DigDeep’s Navajo Water Project, will be used to install 1,200-gallon solar-powered water systems under hundreds of homes to ensure that families have reliable, clean water.

“We’ve been doing work for years now on Navajo Nation, which is the largest reservation in the U.S.,” DigDeep founder George McGraw said. “If it was a state, it would be our 10th biggest.”

DigDeep, a nonprofit founded in 2012, aims to bring running water to commu-nities across America. The Navajo Water Project, an offshoot of DigDeep that started in 2014, has served hundreds of Navajo families.

The Chris Long Foundation’s Waterboys initiative will fund 200 temporary under-ground water tank systems that can hold 275 gallons each. Permanent systems will be installed once the tribe relaxes its COVID-19 protocols.

Waterboys was created in 2015 and focused on bringing water to communities in East Africa, but Long also wanted to place attention on communities in the U.S.

“Clean water is a global issue, even here at home,” said Long, a defensive end who played for the St. Louis Rams, New England Patriots and Philadelphia Eagles before retiring in 2018. “It’s right under our noses.”

More than 30% of Navajos living on the sprawling reservation do not have a tap or toilet at home, according to the Navajo Water Project, forcing them to routinely haul water that costs 67 times more than they would pay for piped water.

A recent NASA monitoring project found that some tribal members have to haul water 50 miles.

Navajo leaders believe the lack of run-ning water has contributed to the ram-pant spread of COVID-19 on the reserva-tion, The Arizona Republic reported. The Navajo Nation had 8,290 confirmed cases of COVID-19 as of July 14, according to tribal health authoriteis.

“We looked at Navajo Nation,” Long said. “We’ve heard the horror stories. Digdeep, they’ve been at it for a long time.”

Long, who first joined the NFL in 2008 with the Rams, won his first Super Bowl ring with the Patriots in 2016 and his sec-ond the next season with the Eagles.

Long and his wife, Megan O’Malley, will donate $50,000, which his foundation will match.

McGraw said the first half of the dona-tion is already being put to use.

“We hope to serve at least 500 homes by the end of this two-month cycle that we’re in the middle of now,” he said, adding that he plans to use rest for home water systems that can provide long term access once the COVID-19 pandemic is over.

McGraw and Long have been talking about the partnership for some time.

“Chris and his team and his family really looked inward and said, ‘You know what’s happening in our country, in our own communities, and what can we do to help them remember that connection?’ We got to work,” McGraw said.

Looking for water on the Rez
Lack of water keeps Navajo family apart
Water hole: No running water on Navajo Nation reservation
As Sam Sees It
As Sam Sees It
Contact Us
Submit Questions, Comments, or Story Ideas