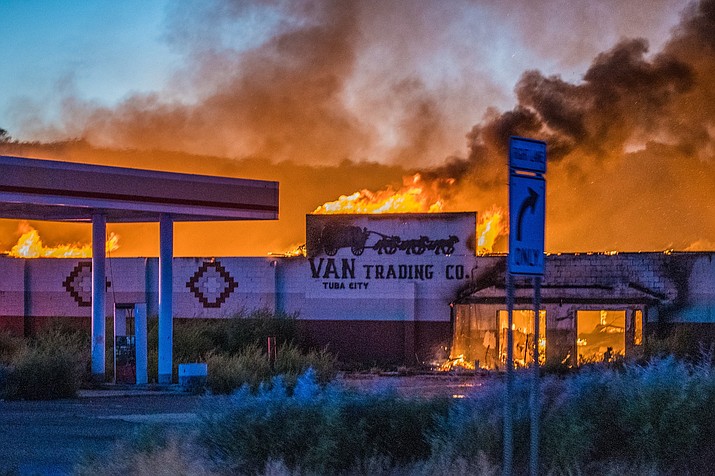 Van's Trading Co. on Highway 160 outside of Tuba City, Arizona, is fully engulfed in fire Aug. 31. Navajo Nation Fire & Rescue firefighters from Tuba City, Twin Arrows and Shonto spent nearly 11 hours on-scene fighting the blaze. The cause of the fire is under investigation at this time. (Photo courtesy of Alyssa Peaches Armendez)

“We didn’t clear (the scene) until six in the morning,” said Lieutenant Gilbert Edgewater, with Station 40 of the Navajo Nation Department of Fire & Rescue in Tuba City.

Station 40 was one of four engines dispatched to the scene. Additional resources included two engines from Tuba City, one engine from Station 81 in Twin Arrows and one engine from Shonto Fire Department. Tuba City emergency medical services and the Navajo Nation Police Department also assisted. 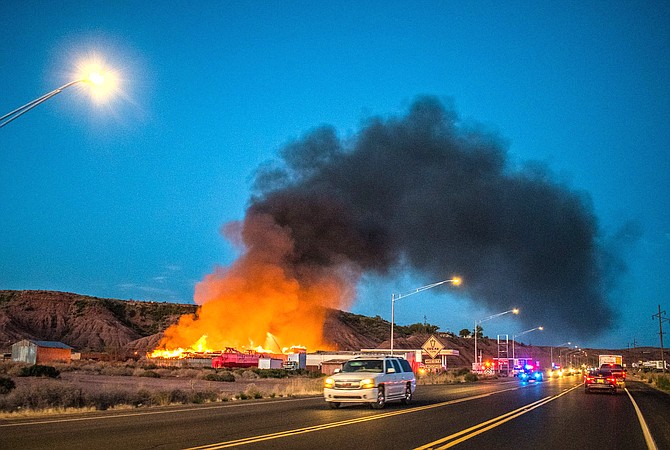 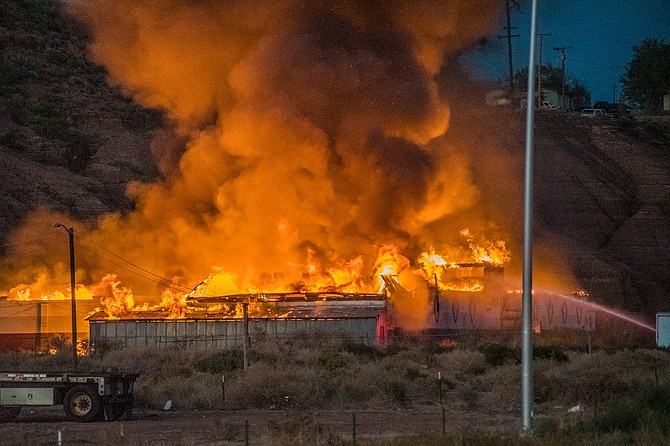 The fire fully engulfs Vans Trading Co. The cause of the fire remains undertermined at this time. (Photo courtesy of Alyssa Peaches Armendez)

Upon arrival, the department used a defensive attack in which the fire is fought from the outside of the structure and does not require fire personnel to enter the building. Edgewater said this method was used because of the design of the struc-ture and the fact it was vacant.

“It’s been many years since any-Armendez, body’s been in there," he said. "We didn't know what was holding inside or if there was any hazards. It was dark, too, so we couldn't really see, we just used our flashlights."

Because of its location, no hydrants were available for responding fire person- nel.

“That delayed a lot of the operations,” Edgewater said.

According to Edgewater, an older fire engine was used for a water relay to shuttle water to and from Tuba City to the scene.

“We’d get water and then go back and top off the main truck,” he said. “We’d go back and forth with the trucks because there’s no water resources to do any draft-ing.”

Additionally, Edgewater said a fire academy is currently underway, which is one reason the department responded with minimal personnel.

“We do have personnel that are there (at the academy), so that can leave us short staffed,” he said.

The cause of the fire remains underter-mined.

No injuries were reported and the scene was cleared around 6 a.m. Sept. 1.

“We all did a good job, no injuries, nobody got hurt — we’re just doing our job,” Edgewater said.