Visitation at nursing homes is on horizon in Arizona 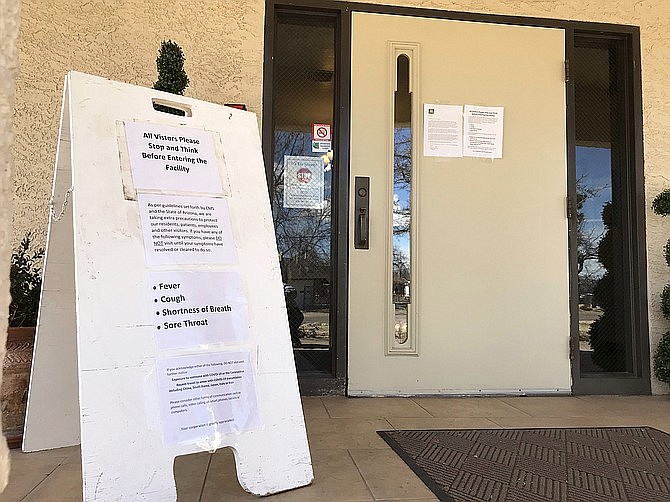 This file photo shows a sign at the entrance to Boulder Gardens Assisted Living Center in the early days of the pandemic before all visitations were canceled. Visitation at nursing homes in the Prescott area and across the state should be returning soon, but there will be restrictions. (Photo/Daily Courier)

ARIZONA - Sometime this coming week you’ll find out when you can finally visit grandma in the nursing home.

Or see your uncle who lives in an assisted living facility.

That’s because these facilities are required to have written plans in effect by the end of the week for exactly how and when they will once again allow face-to-face visits with their residents. And in most cases, that will be the first time since the COVID-19 emergency was declared in March.

In the counties that currently are listed as having a “minimal” or “moderate” chance of spread — nine at last count, including Yavapai — the rules require all congregate care settings to offer limited outdoor visitation. That includes screening visitors for symptoms and cloth face coverings.

Forget about holding hands. There is a mandate for six feet between resident and visitors.

There is a second option for anywhere in the state, regardless of how widespread is viral infection. They can — but are not required to — allow in-person visits from anyone who presents results of tests taken within the last 48 hours showing a negative result for COVID-19 if that person signs a form saying he or she has been isolated since that time and is free of symptoms.

Taking that test may be a hurdle. But Dana Kennedy, state director of AARP, said it’s one worth pursing. “Let’s face it, in Arizona right now it’s really hot,’’ she said. “So that outdoor visit may not be safe.’’

And there are other advantages.

“If the person lives in a private residence they could actually go into their residence and visit with them for 15 minutes,” Kennedy said. “And then they’re supposed to move to a congregate setting after that 15 minutes.”

But at that point, she said, “they can stay and visit as long as they like.”

“This was something that was really important to families,’’ said Christina Corieri, the health care policy advisor to Gov. Doug Ducey.

“They wanted to be able to see the individual’s personal living space, assess what the situation looks like,” she said. Then, after getting that look around, family members can continue their visit in an area is designated for visits.

It was Kennedy who pushed the governor to form the special task force to create standards for visitation, even as the virus remains active in Arizona.

There have been options for maintaining some type of contact, with facilities setting up phone calls and, often, video chats with family. Those lucky enough to have rooms with first-floor windows facing out to the street also had the chance to actually see their relatives, albeit through closed glass.

But there are limits to that. “People are dying of loneliness and isolation,” Kennedy said. And she said that, for some, the situation is even worse.

“People with some form of dementia, they may not understand why their loved one is not visiting them,” Kennedy explained. Plus there’s the fact that the shutdown of visits occurred pretty much overnight.

“Families didn’t get enough closure to really be able to have that closure,” she said. “So I think this is really meaningful.’’

But with no end to the virus in sight — and no clear deadline for when residents and families would be able to see each other again — Kennedy said it became crucial to come up with some interim solution.

What the task force finally came up with isn’t as simple as Kennedy had hoped the process would be. She said families will still need to “jump through a few hoops’’ to get visitation.

“But they’re all reasonable requests if you want to see your loved one during the middle of a pandemic,’’ Kennedy said.

Corieri said there are limits.

“You couldn’t necessarily walk in at 1 in the morning,’’ she said. Corieri said facilities can limit not only the times visits will be allowed but also how long they can last and how many people can visit on any given day.

And even in cases where the visitor produces a negative test result for COVID-19, Corieri said there is still a requirement for “minimal contact.’’

That still leaves the question of being able to get test results back within 48 hours.

Corieri said Sonora Quest says it can get results turned around within 24 hours. Ditto, she said, at Arizona State University which is offering saliva tests, somewhat easier on patients than the long cotton-tipped swab up the nose.

At the University of Arizona there are tests available for antibodies. But these are being promoted for health care workers, first responders and other employees considered at high risk for exposure to the virus.

And if it turns out that requirement is too aggressive, Corieri said the task force still remains active and can consider modifications.

Overall, she said the governor is supportive of what has been crafted.

“We think that these guidelines offer a safe way to reopen visitation in these facilities while still protecting the residents, and reuniting these families who we know that personal contact is so important to,’’ Corieri said.

Here, too, nothing is set in concrete.

“If these guidelines need tweaking we will continue to be open to it,’’ she said. “That is why we have another meeting of the task force scheduled in less than three weeks so that we can have that open feedback loop to hear how things are going and where we can continually improve.’’