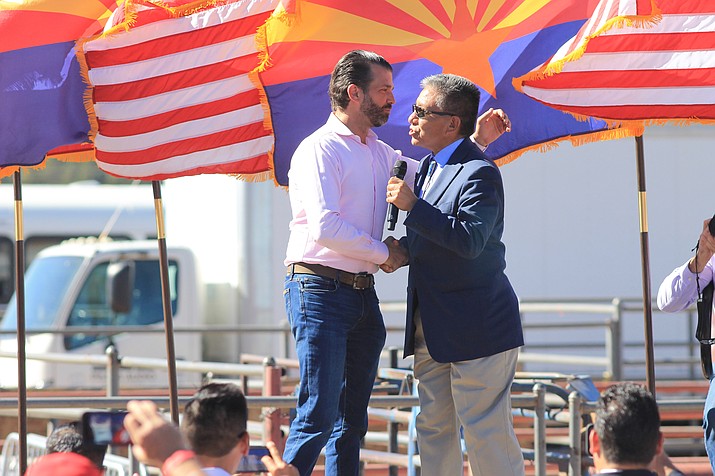 Among the more outspoken, Native Trump supporters online is Joseph Cody, 31, of the Yankton Sioux Tribe and Salt River Pima-Maricopa Indian Community. He calls himself “The Native Conservative.”

A lifelong Democrat, Cody registered as a Republican in 2018. “I figured out I was being lied to by the media and other people in general,” he said.

Navajo Nation Vice President Myron Lizer led the crowd in a chant of “Yeego, Trump!” which roughly translates to “Way to go,” as he introduced Donald Trump Jr. at an outdoor rally in Arizona Oct. 15, which marked the launch of a Native Americans for Trump coalition.

According to the National Congress of American Indians, more than 60 percent of Native people vote Democratic.

A soon-to-be-released survey of 6,400 Native Americans across the country found only about 7 percent identified as Republicans. The remainder identified as independents and Democratic socialists, according to the Indigenous Futures Survey, conducted by researchers at the University of Michigan and the University of California, Berkeley, in partnership with the Center for Native American Youth, IllumiNative and the Native Organizers Alliance.

It’s those kinds of figures that make gatherings like the one held Oct. 15 in Williams, west of Flagstaff, so meaningful for people like Robin Briggman, Hopi, of Sedona, a lifelong Republican and President Donald Trump supporter.

“It was very exciting and so great to be in a group of people who are all on the same page,” said Briggman, 64. “It makes my heart feel happy. It made me smile.”

Briggman expressed confidence that under Trump’s leadership, Native people can expand infrastructures and business on reservations that will help provide jobs and homes.

“Once our kids finish school, they leave and they don’t come back because there are no jobs. I’m worried that our traditional ways will be lost,” she said.

Lizer previously endorsed Trump during the Republican National Convention, and Not Afraid at a Montana campaign event attended by Vice President Mike Pence.

Yet not all Native Trump supporters are quite so vocal.

Briggman was one of a handful contacted by Indian Country Today who agreed to speak on the record; several others shared experiences of being shamed and attacked by family, friends and other Native people for choosing to support Trump and his policies. One source later changed her mind about being named as a source over fears of negative responses.

Common threads among supporters included a sense of mistrust and betrayal by Democratic politicians and the press, estrangement from mainstream politics and weariness with the stagnant nature of social and economic growth in Native communities.

Overall, they maintained Trump has done more for Native people than any other president. All sources credited Trump with creating jobs and improving the economy, the leading reasons for their endorsements.

Lately, more conservative Republicans have been using the term “socialism” to describe much that is wrong in Indian country.

The recently created film “A Long Walk in Socialism” provides insight into the use of this buzzword as a catchall for failings of reservation-based social and political systems that disempower and disenfranchise Native Americans from accessing the American dream.

The film, created and funded by Turning Point USA, features Karen Bedonie and Elisa Martinez, both of the Navajo tribe.

In it, Bedonie frames federal social welfare programming and the trust relationship with tribes as liberalism that functions as a stepping stone to socialism that eventually will lead to communism.

In the end, this brand of reservation socialism contributes to a culture of victimhood versus self-sufficiency, leading to despair and the escalation of drug abuse, suicide and other social ills.

During his speech at the Republican Convention, Charlie Kirk, founder of Turning Point described comparisons of his organization to troll farms as a “gross mischaracterization.”

The Navajo Times reported that Turning Point USA paid for a massive “Navajos for Trump” campaign complete with half-page ads in the Times, a banner ad on the newspaper’s website, as well as large billboards on the reservation displaying the words, “Navajos for Trump.”

Navajo Times reporter Cindy Yurth wrote, “It’s unclear if the Navajos for Trump referenced in the ads are real or a creation of a national political action committee.”

The idea of socialism as an ideological onramp to communism is a page from the ultra-conservative political playbook emphasizing free enterprise, individual liberty, limited government control or regulation, and the belief that government programming that provides services and opportunities for the poor encourage dependence.

Eliminating the federal government’s trust responsibility with tribes, however, would free the government from treaty obligations to protect Native lands, provide health care and other services, according to the National Congress of American Indians.

O.J. Semans of the Rosebud Sioux tribe and executive director of Four Directions, a Native voting rights advocacy organization, told Indian Country Today in a previous article, “Let’s be honest, if the United States honored their treaties as they were written years ago, we wouldn’t need their assistance.”

Semans blames the chronic underfunding of federal treaty responsibilities, rather than socialism, as underlying problems in Indian Country.

‘Conservative to the core’

There is no ignoring the impact of excessive, confusing governmental red tape and regulations in deterring economic development on reservations, according to Shawn Redd.

Redd, Navajo, is a lifelong Republican. Redd ran unsuccessfully for U.S. representative in Arizona’s First District in 2016 as well as president of the Navajo Nation in 2018.

Redd ran several businesses on the Navajo reservation, including auto parts stores and a laundromat.

“We can’t continue to exist in a communist state where the government owns and controls everything. We need to open up the reservation and start some economic development,” he said.

Redd laments a lack of restaurants, hotels and other facilities for tourists on the reservation.

“We’ve got a huge tourism demand that is being unmet; tourists have to work with businesses off the reservation. They get bussed in and bussed out,” he said.

Redd admits there are few Navajo Republicans who think as he does.

“I get teased a bit for my politics. I’m often introduced as Shawn Redd, the Republican,” Redd said.

According to Redd however, Navajos align more with conservative values than they may realize.

“Navajo people are very conservative by nature. They believe in a lot of things that the Republican platform embraces, such as strong family ties, self-reliance and liberty,” he said.

“Natives are traditional, and through our heritage, we are already conservative to the core, making Trump a perfect fit for our beliefs and politics,” he said.

This story has been edited from its original version. The stories, 'Donald Trump releases vision for Indian Country' and 'Donald Trump Jr. launches 'Natives for Trump'' can be read online at indiancountrytoday.com.