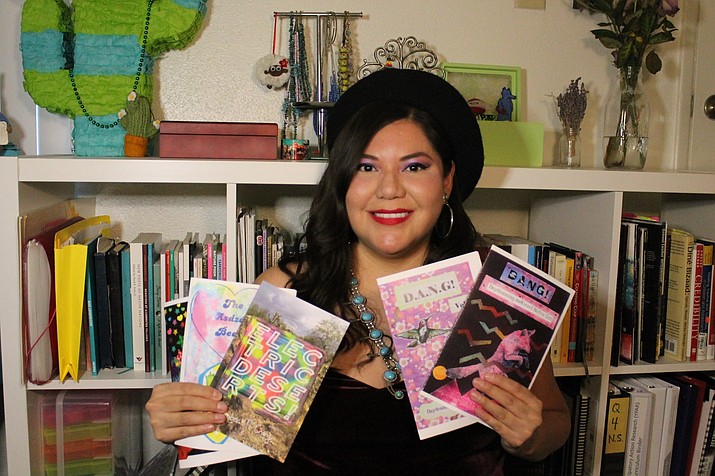 Amber McCrary has a dream and is raising money to start a publishing press for Indigenous writers, called Abalone Mountain Press, which will create books for Native people by Native people.

According to McCrary, there are only a handful of publishing presses that publish only Indigenous writers and even less that are owned by Indigenous people.

The idea to start the press began after graduating from a creative writing program.

“I started reaching out trying to reach out to different presses or different places to get published, and I recently finished my first collection of poetry, which was my thesis for grad school, and I noticed I was having a really hard time trying to find something that was rooted in the community of Native American or Diné community,” McCrary said.

She struggled with that for a while and wondered if other Native or Diné writers were having the same trouble getting published.

“I think a lot of it goes back to the canon or the white gaze, to accommodate that in order to sell books and I think there’s a lot you have to give up as an Indigenous writer in order to accommodate a bigger white audience, or white readers,” McCrary said. “I felt like that was taking something away from being a Native writer. That really is who we are as Native writers. A lot of us want to talk specifically to Native audiences or Native readers. That was my number one goal.”

McCrary said it is important for Indigenous writers to consider who their audience is and that she wanted to make sure Native people felt connected to what she was writing through her poetry or whatever she writes.

“I just really thought it would be great to open a press that would be specifically for Native writers and then also creating this press by Indigenous people or Diné people, whether it’s the logo, a poetry editor, I just want to make sure there is as much Indigenous labor going into this press,” McCrary said. “The main reason I started the fundraiser was because I want to make sure they get paid.”

McCrary said for Indigenous people, there is a lot of explaining of who they are and what they do and they don’t always get paid for it.

“It can be mentally and emotionally exhausting,” she said. “I feel like that is something that is very important — making sure whoever is involved in this press creatively gets paid.”

The meaning behind Abalone Mountain Press

Abalone Mountain Press comes from the Diné name for the Peaks in Flagstaff, McCrary said.

“Abalone Shell Mountain is one of the four sacred mountains for Diné,” McCrary said on her GoFundMe page. She said in an interview that the mountain is sacred to the Hopi, as well.

McCrary was born in Tuba City, Arizona. Her mother is from Shonto, Arizona and her dad is from Hardrock, Arizona. McCrary moved to Flagstaff when she was seven years old and lived there until she was about 20 years old.

“I spent most of my adolescent years in Flag and it really informed who I was as a person, especially artistic wise,” McCrary said.

She has a degree in political science and American Indian studies from Arizona State University.

“That’s where I really learned about American Indian issues and political issues,” McCrary said. “About racism and border town racism. I never really understood it growing up in Flag and I never understood why I was so confused and angry. Once I took these classes, it all clicked and I was like, ‘Wow. I actually understand this now. I understand the feelings I was feeling.’”

For graduate school, McCrary went to Mills College in Oakland, California, where she received her Masterof Fine Arts (MFA) in creative writing with an emphasis in poetry.

She said 90 percent of her cohort was people of color.

“I just learned so much,” McCrary said. “I was really blessed by that because from what I’ve heard from other people and their MFA experiences, a lot of them were mainly white.”

“A lot of BIPOC (Black, Indigenous and people of color) have shared that in their writing, they always feel misunderstood or that their voice isn’t as strong as a white person’s voice,” McCrary said. “That is true in the publishing world as well. You’d think as far as we’ve gone in literature as BIPOC people, there would be more Indigenous presses out there. But once I was trying to find one, I had a really hard time.”

The struggle, too, for people of color is whether to conform.

“I had an identity crisis of should I just give in to the white gaze, should I make my work more accommodating toward non-Native audiences in order to sell more books,” McCrary said. “I don’t think I can do that.”

McCrary is a multi-media person and she writes zines, a small-circulation self-published work of original or appropriated texts and images. That work connected with indigenous youth.

“They’re not perfect,” McCrary said. “Lots of Native youth reach out to me and say they love the work. I feel like that really validates how important peer Native voices [are]. It validated that there is an audience out there — a very strong Native support and a very strong Native community when it comes to the literature.”

“There’s the stereotype that Natives are uneducated or that we don’t read,” McCrary said. “It’s so untrue. Natives read. They create so many great things. I’m amazed by how much the Native youth are creating right now and how they get stuff done.”

While the press for now would be located in Mesa (Akimel O’odham land), McCrary said eventually a goal is for a brick and mortar store in Flagstaff, where she can engage with the community about some of the issues she faced growing up.

“I have a very complicated relationship with Flagstaff, but it’s also where a lot of my writings come from — my views on things and why I’m so involved with indigenous politics, indigenous resistance,” McCrary said. “Growing up in Flag, I felt very ignored, silenced, unheard. I think that’s why it’s always been rooted in me to be heard. Just to have my voice and my experiences out there.”