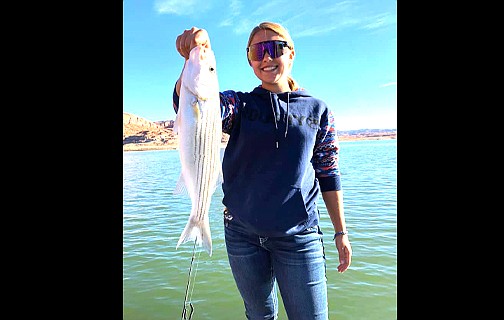 An angler holds her catch of the day at Lake Powell. Cooler evenings on the lake can be expected as northern Arizona moves into fall. (Submitted photo)

Fish are responding as expected. Water temperature is holding near 68 degrees, which is similar to that found in the springtime, when most sport fish are in spawning mode. It is prime time to be fishing on Lake Powell.

Southern Lake: Catfish and striper fishing was steady using bait from store at Wahweap, and from a boat near Lone Rock, Navajo Canyon, Padre Bay, Last Chance and Rock Creek. Night fishing is good and bait fishing during the day is steady. Striper numbers are not as strong as in most years. Fewer shad in the southern lake make it more difficult than usual to catch stripers while trolling, spooning and casting. The best fish to target are smallmouth bass holding on rocky structure. Drop plastic grubs to the bottom and work them slowly back to the boat. Troll medium running crankbaits along rocky structure or 12-30 foot flat bottoms in the main lake.

San Juan to White Canyon: Catching is much better in the middle and northern lake. Near Bullfrog and Halls, try bait fishing at night. Both San Juan and Escalante feature excellent bass and striper fishing. The best fishing lakewide is from Good Hope Bay to White Canyon. Here are some recent reports:

Trachyte to 2-mile: Troll with medium deep divers that run 12-15 feet deep (Norman, Lucky Craft and Strike King). When a striper hits the trolled lure drop spoons to the bottom. The striper school will follow the hooked fish back to boat as they look for more forage. Jig the spoon off the bottom and then speed reel to the surface before dropping it back to the bottom. After the school departs, put the trolling lures back in the water and start over. Both methods work great and many stripers end up in the boat. Bass fishing is great. Do not be surprised to catch crappie, bluegill and catfish.

Use the same techniques on the San Juan from Piute Canyon to the Great Bend. Troll, then spoon, and cast for great results. Randomly, throughout the fishing trip, striper boils may occur. When surface action pops up, cast top water, shallow running cranks, or spoons. Try to cast over the school and reel back through it. This time of year stripers are not as spooky. A surface lure landing in the middle of the boiling fish will not frighten the feeding fish.

This is prime fishing time on Lake Powell. Boat traffic is thinning out. Stripers and bass are aggressively feeding on surface and in shallow water. Bigger smallmouth are in deeper water (20-40 feet) acting more like stripers as they attack shad schools. Expect prime fishing as long as water temperature is in the 60s. When water temperature falls into the 50s then spooning takes over as the best catching technique. For now, it looks like all of October will be prime time for bass lakewide and for stripers in the middle and northern lake. This is going to be very fun!