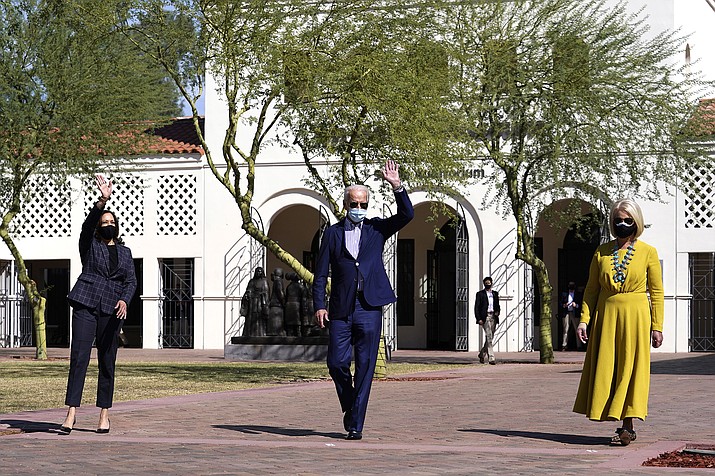 The 15-page plan says if elected, a Biden administration will build on efforts made by the Obama administration, “which were instrumental in rebuilding trust, good faith and respect for the tribal-federal relationship.”

The plan was released prior to a meeting Oct. 8 with tribal leaders in Arizona.

At the forefront of the plan are goals to strengthen the nation-to-nation relationship between tribal nations and the federal government by reinstating the annual White House Tribal Nations Conference, a space for tribal leaders to meet directly with the president and his staff to address issues in their communities. 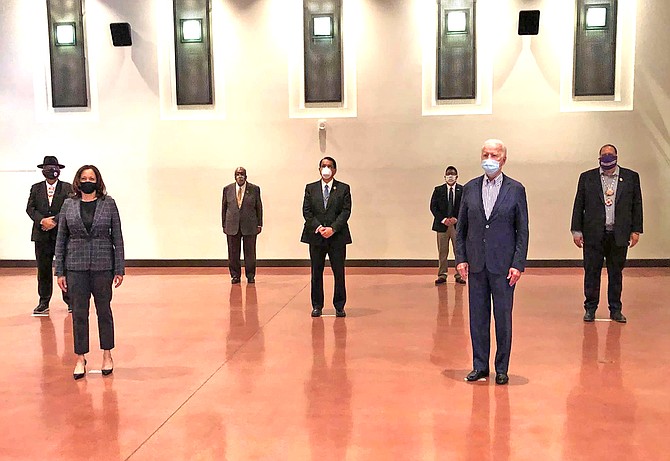 The Biden-Harris campaign also promises to launch a budget task force under the White House Council on Native American Affairs to understand funding shortfalls to ultimately decide whether to make Indian Country’s funding “advanced” or “mandatory,” instead of discretionary.

In addressing the coronavirus, the plan says Native people have among the country’s highest per capita infection rates, citing they are 3.3 times more likely to die from the virus than Anglos.

The Biden-Harris ticket says it will lead a decisive public health response to COVID-19 through free testing, development of a safe and effective vaccine, and through ensuring tribal governments are respected in reopening decisions.

“I am pleased to provide my personal support and endorsement to Vice President Biden and Senator Harris to be our next President and Vice President of the United States,” said Gila River Indian Community Governor Stephen Lewis. “Their Plan for Tribal Nations, and their record over decades of service make it clear that they understand Tribal sovereignty and their trust responsibilities to Tribes and that they will tackle our challenges head-on if elected.”

Earlier this year, Lewis and Navajo Nation Vice President Myron Lizer met with Trump in Arizona, where they discussed the coronavirus and $8 billion in federal relief funding set aside for tribes.

In restoring tribal lands, the plan promises to make it easier to place lands into trust, a controversial topic after the Trump administration threatened to take the Mashpee Wampanoag Nation’s land out of trust in recent months.

“Taking land out of trust, de-establishing reservations, and proposing to cut Indian Child Welfare by 35 percent are just a few examples of Trump’s failed policies for Indian Country,” Chairperson of the Sault Ste. Marie Tribe of Chippewa Indians Aaron A. Payment said. “So I am excited about the recently released Biden-Harris Plan for Tribal Nations, which will honor the treaty and trust responsibility. I am voting pro-tribal sovereignty and supporting Joe Biden and Kamala Harris.”

For climate change, the plan says it will aim to achieve net-zero emissions by no later than 2050. It says it will ensure investments in clean energy reach Native people by setting a goal that disadvantaged communities, including Native communities, will receive 40 percent of overall benefits.

The issue of violence against Native women is also addressed in the plan.

It says the administration will partner with tribes and women’s advocates by providing support for tribal justice systems, increasing data collection methods, and directing the Department of Justice to investigate cases of missing and murdered Indigenous women.

Rep. Deb Haaland, Laguna and Jemez Pueblo, of New Mexico added her support for the Biden-Harris campaign’s plan, saying it “lays out a strong path forward for Indian Country.”

“I am also especially appreciative of Joe Biden’s commitment to the crisis of Missing and Murdered Indigenous Women which has plagued our communities for far too long,” she said.

Trump has been a strong supporter of the Native American community, his deputy national press secretary Courtney Parella said Oct. 8.

“The resident provided $8 billion to address coronavirus preparedness, response and recovery for American Indians and Alaska Natives, and he remains committed to finding solutions to prominent issues faced by Native Americans, from access to better education to rural development and more,” Parella said in an email to Indian Country Today. “President Trump will leave no American behind as he delivers the Great American Comeback, and that includes our tribal communities.”

Regarding infrastructure, the Biden-Harris plan affirms goals to build and repair roads, highways and bridges in tribal communities, saying in 2019, almost one in six bridges in Indian Country were deficient or functionally obsolete.

The Biden administration plan also will invest $20 billion in rural broadband infrastructure and work with the Federal Communications Commission to reform its Lifeline program to offer low-income Americans subsidies to access high-speed internet.

The plan states it will create a “Small Business Opportunity Fund” that will leverage more than $150 million in new capital for Native businesses and others. It says this fund will spur $50 billion in public-private venture capital funds to entrepreneurs to create jobs and growth.

On the education side, the Biden-Harris campaign added that it will invest in public and Bureau of Indian Education schools by tripling funding for Title I of the Elementary and Secondary Education Act. This will ultimately provide resources for schools to support low income students. It also says part of Biden’s $100 billion plan to invest in public schools will include a set-aside portion for tribal schools.

The plan also says it will protect funding for the Johnson-O’Malley Program, aiding in promoting Native history and culture in schools.

On student debt, Biden promises to cancel $10,000 of federal student loan debt and forgive all undergraduate tuition-related debt from two and four year public colleges, including tribal colleges and universities.

The plan addresses Native people serving in the military at higher rates than other demographic groups. To protect them, the duo says they will expand services to address homelessness and aid in applying for home loan grants.