‘Neither Wolf nor Dog’ returns to Flag
Following a successful, four-year run, ‘Neither World Nor Dog’ reopens in theaters around Arizona Oct. 23 including Flagstaff, Prescott Valley, Tempe and Tucson 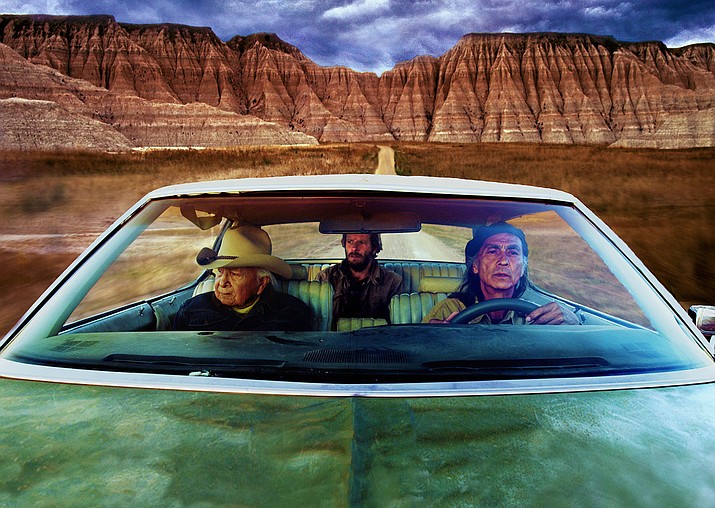 ‘Neither Wolf Nor Dog’ takes audiences on a deeply moving road trip through contemporary and historical Lakota life and culture. The film returns to Flagstaff Oct. 23. (Photo courtesy of Roaring Fire Films)

FLAGSTAFF, Ariz. — The middle of a pandemic is an odd time for a film to open in theaters, but for ‘Neither Wolf Nor Dog,’ which returns to Flagstaff Oct. 23, is a sign of its ongoing success.

The independent film, adapted from the Minnesota book award winning novel written by Kent Nerburn, and filmed by Steven Lewis Simpson, will also open in theaters around Arizona including Prescott Valley, Tempe and Tucson for at least a week, if not more.

The film follows a Lakota elder (David Bald Eagle) and his protective friend (Richard Ray Whitman) as they draw a white author (Christopher Sweeney) into the heart of Lakota country, encouraging him to see their reality without falling prey to white men’s guilt-ridden clichés so the elder’s reality can be distilled into a book the old man can leave future generations.

Simpson said since the film’s initial release, it’s had a crazy life.

“It’s built and built and kinda worked its way around from one region to another,” he said.

The film first opened at Harkins in Flagstaff in 2017.

“It did very, very well in Flagstaff,” Simpson said. “It’s been in cinemas one place or another almost ever since.”

Three or four months is a long theatrical release, Simpson explained. But ‘Neither Wolf Nor Dog’ has had the longest first-run theatrical release of any movie in U.S. cinemas in the past decade and has become the most successful non-Hollywood Native American themed film in years.

“We’re almost at four years, which is kind of insane, really,” Simpson said. “We found that, particularly in certain regions, people really gravitate to the film.”

‘Neither Wolf Nor Dog’ will be released on more screens in 2020 than when it first opened, partly because there are no films currently being released out of Hollywood because of COVID-19.

“They’re all struggling,” Simpson said. “One of the things they see in ‘Neither Wolf Nor Dog’ is that it’s a film that sort of has its own audience.”

Simpson said the film has been shown in nearly every Native-owned cinema in the country and that border reservations.

One thing he has heard, particularly in Lakota country, is that the film has done a great job representing Lakota people. Simpson said that makes him happy.

Simpson said he encountered a lot of elders like Dave Bald Eagle, who had an extraordinary light about them, personality, humor and insight.

“But these are the last of that generation,” Simpson said. “It’s sort of like losing Code Talkers in that area, because you know that those guys, that was their first language (Navajo). The subsequent generation don’t have that same feel. Russell Means used to tell me a lot about the people who he used to hang out with who old enough, that they were brought up by people who were born free.”

That is why David Bald Eagle was cast at the age of 95. For the story to work, the character had to be older, otherwise he would have felt too contemporary, Simpson explained.

“It’s something you can’t act,” he said. “It’s in the fabric of the human being playing the role.”

Simpson acknowledged that a pandemic may not be the best time to see a movie, and that the film is popular with an older audience who are in a higher risk group right now because of COVID-19.

“That is completely understandable,” Simpson said. “The one thing that is the tragic irony in this for cinemas is that people aren’t going there because of COVID and yet if you’re going to any public space, (cinemas) are averaging three or four people per showing. Unfortunately, for the cinema business, the most socially distant public space, people are going and finding they have the theater to themselves. It’s like a private screening.”