Trump signs Savanna’s Act and Not Invisible Act into law 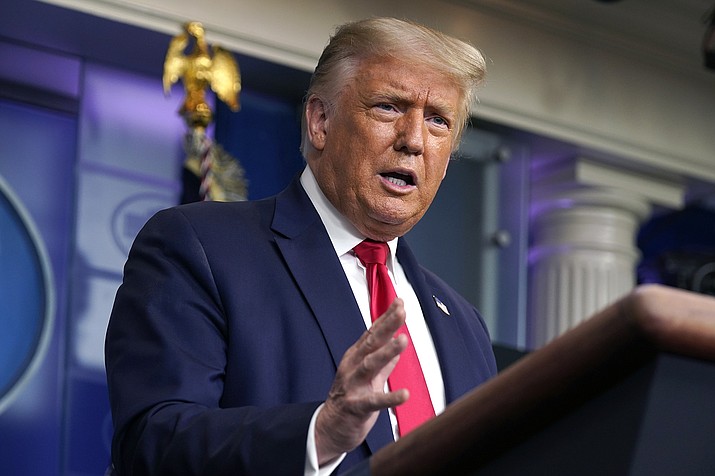 Navajo Nation President Jonathan Nez and Vice President Myron Lizer commended Trump for signing the acts into law, which will help to address the missing and murdered Indigenous women crisis that continues across the United States.

Indigenous women face a murder rate 10 times higher than the national average, with 84 percent experiencing some form of violence in their lifetime.

Among other provisions, the Savanna’s Act creates new guidelines for responding to cases of missing and murdered Indigenous women and creates incentives for its implementation.

The Not Invisible Act creates an advisory committee on violent crime, which will consist of tribal leaders, law enforcement, federal partners, service providers and survivors who will be tasked with issuing recommendations to the U.S. Department of the Interior and Department of Justice.

Nez marked the day as historic for tribes across the country and thanked Congresswomen Deb Haaland (D-N.M.) and Sharice Davids (D-KS), Sens. Lisa Murkowski (R-AK) and Catherine Cortez Masto (D-NV), other members of Congress, tribal leaders and grassroots advocates who fought long and hard to push the important measures over the finish line.

“[They worked hard] to help bring an end to the ongoing losses of life, trauma and devastation caused by the missing persons crisis across our country,” Nez said. “We have many members of the Navajo Nation who are very compassionate and dedicated to helping families who have missing loved ones. We look forward to seeing the benefits that these two bills will have.”

Savanna’s Act is named in honor of Savanna LaFontaine-Greywind, a member of the Spirit Lake Tribe, who vanished from her apartment in Fargo, North Dakota, while 8 months pregnant. Eight days after she disappeared, her body was found wrapped in plastic in the Red River, her baby cut from her womb.

The legislation that Haaland (and others reintroduced in the House last May empowers tribal governments with the resources and information necessary to respond to cases of missing or murdered Native Americans and increase their data collection.

It also increases coordination and communication among federal, state, and tribal officials.

“On the Navajo Nation, disastrous outcomes occur from failed communications across multiple jurisdictions when coordinating efforts to address reports of missing or murdered indigenous persons,” Nez and Lizer said in a letter to the House this spring in support of Savanna’s Act said.

“We certainly thank the members of the House and Senate and President Trump for supporting these new laws that will help many tribes and families in Indian Country,” Lizer said. “We have heard many stories and firsthand accounts of our people who have gone missing and/or have been murdered and many families continue to suffer from the resulting trauma and heartache. I am hopeful that these new provisions will lead to justice, closure, and healing for many of our people.”

Savanna’s Act authorizes best practices in conducting searches for missing persons on and off tribal land, establishes standards on the collection, reporting, and analysis of data and information on missing persons and unidentified human remains and requires the culturally appropriate identification and handling of human remains identified as belonging to American Indians. It also provides guidance on which law enforcement agency is responsible for inputting information into databases, how agencies can improve response rates and provide culturally appropriate victim services.

Lastly, Savanna’s Act adds two new purpose areas to two existing grant programs administered by the Justice Department, specifically, allowing grantees to use funds to implement policies, protocols, and training for law enforcement regarding cases of missing or murdered Native Americans, and to compile and report data to the Attorney General.

It is unknown how many Native women go missing each year due to the lack of adequate data systems and coordination within law enforcement agencies. In 2018, the Urban Indian Health Institute (UIHI) completed a landmark survey, reporting 5,712 missing Alaska Native and American Indian women and girls, only 116 of whom were registered in the Department of Justice database.