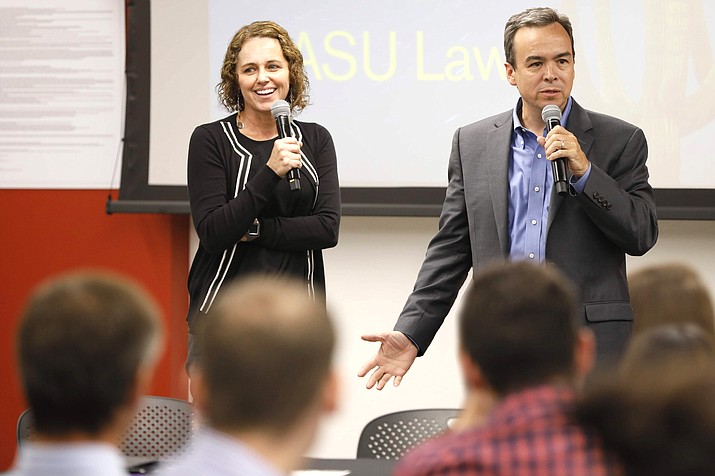 ASU Law Dean Douglas Sylvester said he wanted to establish the new programs to further the college’s commitment to serving the educational needs of tribal nations.

“With the addition of our Indian Gaming and Tribal Self-Governance programs, we are building upon our world-class Indian Legal Program to ensure that our students receive the best possible education and real-world experience that they wouldn’t get anywhere else,” he said.

Heading up the programs are national experts Lawrence Roberts and Ann Marie Bledsoe-Downes, both of whom served in leadership roles in the U.S. Department of the Interior’s Office of the Assistant Secretary – Indian Affairs under former president Barack Obama’s administration. Roberts, the programs’ full-time executive director and professor of practice, is a citizen of the Oneida Tribe of Wisconsin. Roberts served over four years in leadership positions in the Office of the Assistant Secretary – Indian Affairs, including acting assistant secretary, leading Indian Affairs for the last year of the Obama administration. Roberts previously served as general counsel of the National Indian Gaming Commission, the federal agency responsible for the regulation of Indian gaming.

Bledsoe-Downes, director of the programs and professor of practice, is executive vice president of community impact and engagement at Ho-Chunk, Inc. She teaches a class in Washington, D.C. focused on federal advocacy and a class at Ho-Chunk, Inc. in Nebraska. She previously served as deputy assistant secretary for Policy and Economic Development in the Office of the Assistant Secretary – Indian Affairs and as the acting director of the Bureau of Indian Education. An ASU Law alum, she also was the executive director of ASU Law’s Indian Legal Program and prior to that, director of the ILP’s graduate programs.

The Indian Gaming and Self-Governance programs offer a focused degree in the Master of Legal Studies (MLS) and Master of Laws (LLM). The two distinct areas of emphasis provide students with the opportunity to pursue a broad career path in Indian gaming or Tribal Self-Governance from executive positions with tribes and tribal entities, tribal elected officials, and other leadership or management roles in congressional, federal, state and local government.

“Tribes and other employers are investing resources in on-the-job training because these focused master degree programs are not offered by any other law school in the country,” Roberts said. “Our graduates will be able to hit the ground running, saving both time and resources for a broad spectrum of employers – tribes, federal agencies, congressional staff and state agencies. We’re building off of more than 30 years of excellence at the ILP and this is another step to further that excellence.”

With the Indian Gaming focus area, ASU Law is providing in-depth courses for students on the regulation, compliance and implementation of Indian gaming. Indian gaming generates annual revenues in excess of $33 billion with more than 680,000 employees. ASU Law’s MLS degree will equip professionals with the essential legal components of Indian gaming to excel in careers that intersect with Indian gaming.