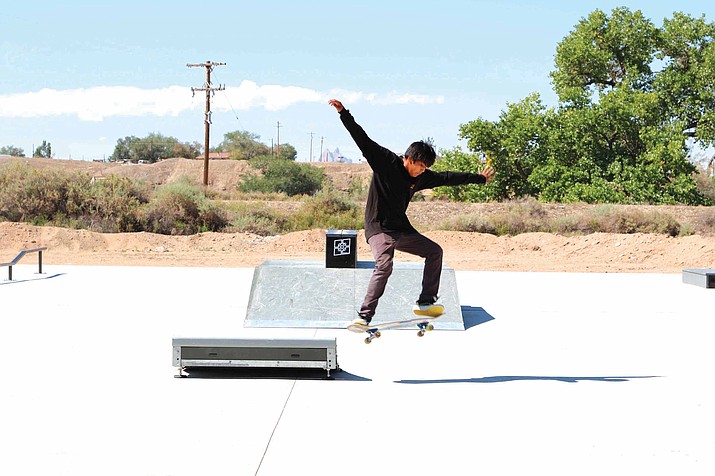 Lemar John does tricks on his skateboard at the new skate park at Nizhoni Park in Shiprock, New Mexico. (Noel Lyn Smith/The Daily Times via AP)

SHIPROCK, N.M. (AP) — The wheels on Neshaun John’s skateboard were among the first to roll on the ramps, rails and grind boxes at the new skate park at Nizhoni Park.

For John, the layout and equipment provide space where he can practice his skills closer to his home in Sanostee.

Many communities on the Navajo Nation lack skate parks or designated areas where skateboarders can master fundamental techniques like ollies, flip tricks, slides and grinds.

Since Sanostee lacks concrete surfaces, John can travel more than an hour to visit the skate park at Brookside Park in Farmington.

“It has brought something closer to my home,” he said of the skate park in Shiprock. 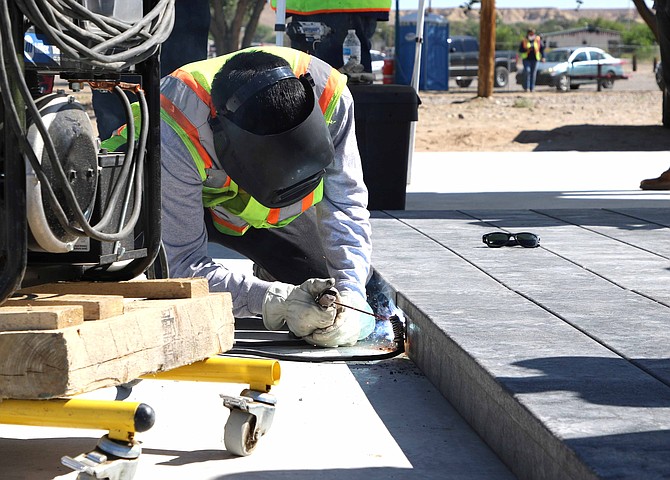 A member of the New Mexico Youth Conservation Corps welds a piece of equipment at the Nizhoni Park. (Noel Lyn Smith/The Daily Times via AP)

The skate park was built by the New Mexico Youth Conservation Corps’ San Juan County branch and it is the corps’ latest amenity in Nizhoni Park.

Trini King, the group’s supervisor, explained that YCC members started assembling the skate park equipment inside the Shiprock Chapter house in July then prepared the area at Nizhoni Park.

Members worked with Mesa Sand and Gravel from Farmington to build the 65 by 100 feet concrete slab, then installed the ramps, rails and grind boxes.

The project served two purposes, the first is bringing a skate park to the community and the second is providing hands-on training for the 16 members, King told the Farmington Daily Times.

Since April 2015, foods that have minimal to no nutritional value — such as chips, candy and soda — have been subject to an additional 2 percent sales tax when purchased from retail locations on the reservation.

The revenue is deposited into the Community Wellness Development Projects Fund then distributed by the Division of Community Development to chapters for projects that promote fitness and health.

The skate park equipment was purchased in 2004 by the Health Promotion Disease Prevention program at Northern Navajo Medical Center, according to Peterson.

She said the equipment was in storage since then because the chapter government was sanctioned by the Navajo Nation Council’s Budget and Finance Committee and it took several years by the local leadership to clear the penalties.

Several discussions about building a skate park took place during that time, but the idea gained momentum again this year, Peterson said.

She added that skateboarders from the community, along with their family members, helped pass a chapter resolution in February that supported construction of the skate park.

Borunda said kids expressed enthusiasm when watching the construction and they frequently asked when the skate park would open.

“They came over here and thanked us because they kept getting kicked out of spots around Shiprock and in Farmington because they had nowhere to skate,” he said.

Sam said he looks forward to seeing the park’s impact on the community.

“It’s a stepping stone to moving forward into the future — progress,” he said.