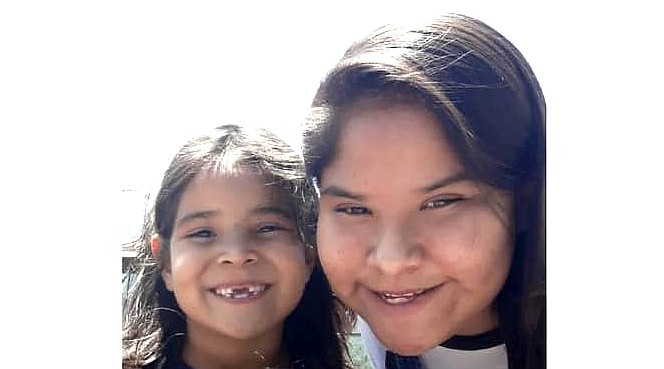 UPDATE: The Navajo Nation Amber Alert for missing children Jayda John and Jaylee Spencer has been cancelled. The Navajo Department of Investigations has confirmed the children were located and are safe and in Navajo Police Department custody. Kristy Pinal is in police custody. The case remains under investigation and additional information will be provided as it becomes available.

WINDOW ROCK, Ariz. – An Amber Alert has been issued for two missing children from the Navajo Nation.

The Navajo Nation Police Department is seeking the public’s assistance in locating two missing children, Jayda John, 7, and Jaylee Spencer, 14, who were taken from their uncle’s home in Fort Defiance, Arizona by his girlfriend, Kristy Marie Pinal, 29.

According to the police, Jayda and Jaylee were given permission by their mother to stay with their uncle in Fort Defiance on Nov. 21. On Nov. 22, the uncle of the girls indicated he left his residence to haul woods, when he returned, his vehicle was missing and Pinal, her 3-month old child, and his two nieces were not home. Pinal made contact with the girl’s mother indicating she would be returning that night but did not return. The children were reported missing Nov. 23. 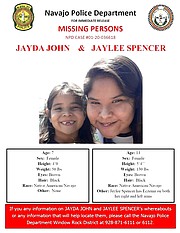 Pinal is believed to be driving a 1998 green Saturn SL1 four-door sedan; Arizona plate BLE8163. She is 5 feet 2 inches, 120 pounds, with brown eyes and black hair. In Pinal’s last contact with Jaylee and Jayda’s mother, she indicated she was with her parents in Whiteriver, Arizona.

The Navajo Police Department has contacted the local law enforcement agency in Whiteriver. The missing children have been entered into the National Crime Information Center (NCIC).