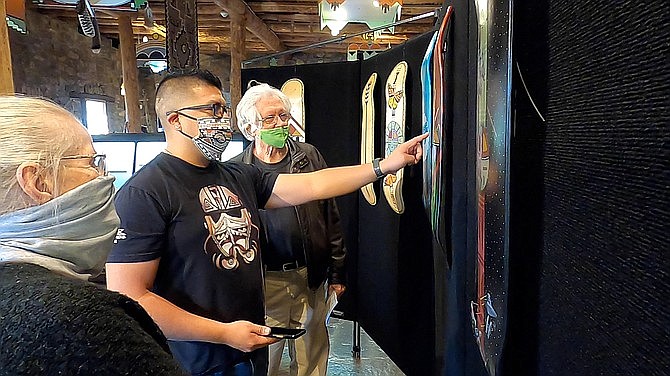 PRESCOTT, Ariz. —The Museum of Indigenous People is hosting a guest artist series every weekend through Dec. 18 featuring Native American artists who will demonstrate their art and have it available for sale in the museum, according to a news release.

The guest artist on the weekend of Nov. 14 and 15 was Hopi/Tewa contemporary artist Duane Koyawena, who is known for his contemporary stylings, painting canvas shoes and skateboards.

Koyawena has battled alcoholism and has been sober for 11 years. He compares his sobriety to art, as both require discipline. Koyawena was a curator for the “Pivot Skate Deck Art” exhibit at the Museum of Northern Arizona and he painted the R2-D2 in The Force is With Our People exhibit.

According to Cindy Gresser, executive director of the Museum of Indigenous People, the past year has been a difficult time for native artists, so the guest artist series is intended to bring some attention back to the arts.

“There are no powwows. There are no gatherings. There are no fairs for them to go and sell at. Even museum exhibits and shows are very limited right now,” Gresser said. “So through a very generous grant by an anonymous donor, we are able to bring in artists from all over the southwest and even the country to come in on a Friday, Saturday, Sunday, and they've got social distancing, good lighting, a place to sell and a great place to stay here in Prescott.”

Museum member Dean Mickelson said that he was glad to hear about the weekly series bringing attention to the artists.

“The artists coming out to show what they're doing, I think it's important to have some program like this continuing,” Dean said.

Koyawena, 38, explained that his art draws from a mix of traditional Native American designs and modern themes.

“I would say, definitely a lot of it draws from my Hopi culture. Another aspect that my artwork is drawn from is the day and age that I'm in today,” Koyawena said. “Some of the things that I do find interesting, such as Star Wars, I really draw to as trying to inspire a lot of the youth to get into artwork or finding some kind of niche to really take any kind of talent and pursue it and make something of it.”

According to Dean’s wife Lori Mickelson, the intricately designed skateboards on display reminded her of her son.

“My son is a skateboarder. He's a 60-year-old skateboarder. He still does it. So that caught my eye,” Mickelson said. “It's his appeal to the young generation that's awesome.”

More information about the Museum of Indigenous People, located at 147 N. Arizona Avenue, Prescott, and a complete list of guest artists in the series is available at www.museumofindigenouspeople.org.