From Nov. 9 to Nov. 11, the FBI led hundreds of officers in a large-scale, multi-agency law enforcement operation that took place at 21 farms and two residences on the Navajo Nation near Shiprock. The marijuana was housed in 1,107 grow houses, though dozens more were under construction. 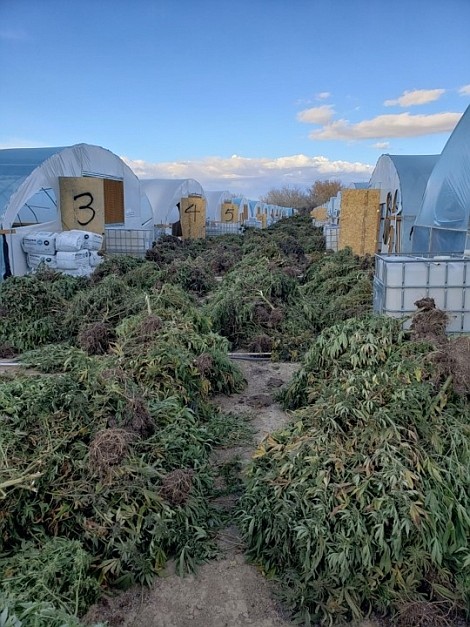 “First and foremost, I want to congratulate all the agencies involved in this operation, and especially those agents on the scene,” said John C. Anderson, U.S. Attorney for the District of New Mexico. “The numbers are astounding, and that could not have been achieved without a high level of interagency cooperation and coordination. I am consistently impressed by the professionalism displayed by law enforcement agents in the District of New Mexico. What they accomplished over the past week is remarkable. We are proud stand with the Navajo Nation in upholding and enforcing tribal and federal law.”

“I’m not sure what is more amazing: the amount of high-grade marijuana we kept off America’s streets, or all the federal, state, local, and tribal agencies who tirelessly worked together to overcome numerous challenges and get the job done,” said James Langenberg, Special Agent in Charge of the Albuquerque FBI Division. “One thing I know for certain: We made a huge difference not only on the Navajo Nation, but in countless other communities. The FBI is extremely proud to have been a part of this significant operation and thanks the many partners who contributed to its success.”

“The top priority is the safety and well-being of our Navajo citizens and law enforcement officers,” said Navajo Nation President Jonathan Nez. “We appreciate everyone’s patience throughout this process as the Navajo Nation, federal, state, and counties worked together. It took a lot of time, coordination, and resources to execute this operation over the last few days. On behalf of the Navajo Nation, I thank the Navajo Police Department, Department of Justice, FBI, U.S. Attorneys, and many others who dedicated their time to help our communities eradicate these illegal activities.”

“The coordinated efforts and tireless work of all involved has brought the much-needed resolution to the marijuana operations and has given the Navajo Nation citizens, as well as the surrounding communities, peace of mind,” said Chief of Police Philip Francisco of the Navajo Police Department. “This operation is a testament to the professionalism of law enforcement, who have worked diligently to ensure the safety of our communities.”

“Tackling the scourge of illicit drugs in tribal communities has been a top priority for the Trump Administration with Interior and the Bureau of Indian Affairs helping lead the way,” said Secretary of the Interior David L. Bernhardt. “I want to thank our federal, tribal, state, and local law enforcement partners for their tremendous efforts in taking down this major operation and making these communities safer.”

“Through the cooperative efforts of federal, tribal, state and local law enforcement partners, we have put a stop to a massive marijuana grow operation, which was being carried out under the guise of hemp farming,” said Kyle W. Williamson, Special Agent in Charge of the Drug Enforcement Administration’s El Paso Division. “The persons running this marijuana operation were doing so in disregard of tribal law, the health and well-being of tribal members, and the natural resources of the Navajo Nation. We thank community members for saying something when they saw something.”

“Large-scale growing operations, such as this one, can pose a serious risk to human health and the environment,” said Special Agent in Charge Christopher Brooks of the Environmental Protection Agency’s Criminal Investigation Division in New Mexico “Today’s action sends a clear signal that EPA and its law enforcement partners are committed to enforcing environmental laws that protect our communities.”

“I am proud of the hard work and dedication contributed to this operation by my officers and agents.” said Robert Thornton, Chief of the New Mexico State Police. “The result of this unprecedented effort serves to strengthen the cooperation between our federal, state, and local law enforcement partners”

“This case had many jurisdictional hurdles. Thanks to the longstanding partnerships between federal, state and local law enforcement, we came together to stop a significant criminal enterprise in our community,” said San Juan County Sheriff R. Shane Ferrari. “San Juan County is truly blessed to have these dedicated professionals to keep our communities safe.”

Dozens of federal agencies were involved in the effort.

Information provided by the Office of the President and Vice President.