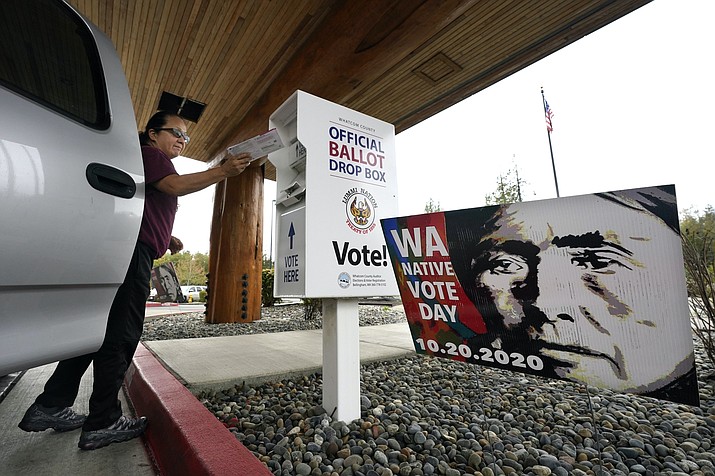 PHOENIX — Native Americans are not a monolithic population. That makes them a challenging group to appraise especially for non-Native pollsters and researchers.

These manifest truths emerged as some of the most important takeaways from the presidential election.

According to the Latino Decisions Election Eve Survey, 60 percent of Native Americans voted for Biden.

Some media including Indian Country Today reported that counties in which reservations are located showed more than 50 percent support for Biden and noted that in some states such as Arizona, Wisconsin and Nevada, Native votes may have influenced the final outcome.

CNN, however, chose to ignore the Native American vote altogether and simply lumped them into a catch-all category entitled “something else” in its reporting.

Unfortunately, most mainstream polls and data sets either sample a tiny portion of the population or follow CNN’s example of erasing Native Americans.

Although national surveys, collected mostly via landline telephones, are considered the gold standard for measuring public opinion they frequently overlook smaller groups such as Native Americans, according to researchers Ben Pryor of the Choctaw Nation, researcher and journalist and James Davis, emeritus professor of political science at Oklahoma State University.

Currently, about 50 percent of the U.S. population owns a cellphone but no landline; the disparity among people of color is even greater.

Landline owners tend to be older and Caucasian according to Pryor and Davis.

Eligible Native voters comprise about 1.54 percent, 3.7 million of the country’s total 240 million eligible voters. Although often elusive to polling efforts conducted by large research organizations, Native voters have played a key role in this and other elections.

According to Crystal Echo Hawk, Pawnee, founder and CEO of IllumiNative, a Native advocacy nonprofit organization, the narrative in mainstream media about Native voters focuses either on low voter turnout and registration numbers or how voter suppression keeps them from the polls.

“It is absolutely apparent that the Native vote made a big difference in this election,” Echo Hawk said.

To create a more accurate measure of Native American engagement in the political process, IllumiNative partnered with the Native Organizers Alliance and the Center for Native American Youth to create the Indigenous Futures Survey, in which Native and non-Native researchers gathered information from more than 6,400 respondents from more than 400 tribal affiliations from all 50 states.

Survey authors claim their research drew from the largest group of Native Americans ever included in an opinion poll.

One of the biggest problems for traditional researchers is their inability to find Native peoples in the first place, according to Echo Hawk.

“Asking about heritage opens up the response to include people who may have a family story about an ancestor who may have been Native American,” Echo Hawk said.

“Rather than including anyone who had ever claimed Native heritage, we were interested in people who identify as Native, which is very different,” said Fryberg.

“We tried to move away from treating Native identity as monolithic,” Fryberg said.

Although the Native American population is small, they are a very diverse population. For instance, about 78 percent of Native peoples live off reservation; 72 percent live in urban or suburban environments. Not all Native people are enrolled citizens of tribes.

Fryberg and her fellow researchers drilled down into the concept of Native identity by asking respondents not only if they were citizens of federally recognized tribes but also about how important their identity is to their sense of self, their level of engagement with the Native community and participation in ceremonies, culture and language and whether or not they lived on a reservation.

“We didn’t classify people, we created models that gave us a more dynamic look at what it means to be Native,” Fryberg said.

“The survey showed that the more engaged people were with their Native identity and cultural lifeways, the more politically and civically engaged they were,” said Echo Hawk.

Engagement with identity and culture, rather than enrollment in a federally recognized tribe was more predictive of political and civic engagement and voting, according to Fryberg.

Similarly, Fryberg and Arianne Eason, assistant professor of psychology at the University of California - Berkeley, found that 57 percent of Native Americans who engage regularly with tribal cultural practices took offense to the Washington football team’s use of a Native mascot and name.

In order to counter the inaccurate and misleading data collected through traditional polling methods, Native researchers are turning to opt-in internet surveys.

“We were able to get the survey out into communities all over the country and pushed it through our own network by hiring Native digital organizers,” Echo Hawk said.

“The strength of our survey is that it was Native led.”

According to Pryor and David, opt-in internet surveys are becoming a viable alternative for measuring diverse subsections of the population.

“The absence of data is often why our community is overlooked or dismissed; we, as a community, have to come together and figure out how we are going to conduct research,” said Fryberg.

Echo Hawk recently announced that IllumiNative, partners and researchers who conducted the Indigenous Futures Survey have launched the Something Else Survey in order to measure the Native vote from the 2020 election. The new survey is a response to CNN’s creation of the ambiguous “something else” category for Native voters as well as the Associated Press’s VoteCast survey finding that 52 percent of Native Americans voted for Trump.

According to Emily Swanson, director of public opinion research for the Associated Press, VoteCast used the following question to determine voters’ racial/ethnic identification.

“What is your racial or ethnic heritage?”

Of the 110,000 respondents to the AP VoteCast poll, 544 were Native American or Alaska Native. They were also self-identified.

According to information on its website, the AP VoteCast started with a postcard, mailed to a random sample of registered voters in selected states, inviting them to take the survey either online or by phone. Researchers also called some voters by phone.

Researchers for the Indigenous Futures Survey found that 51 percent of respondents identified as Democrats, 26 percent as Independents, 9 percent as Democratic Socialists and 7 percent as Republican.

“We also found that 77 percent of the people who took our survey said they voted in the last presidential election,” Echo Hawk said. “We are challenging our erasure in voting data and demonstrating the strength and influence of our diverse peoples and Nations.”

Mary Annette Pember, a citizen of the Red Cliff Ojibwe tribe, is a national correspondent for Indian Country Today.