No new restrictions, mandates from Ducey amid COVID-19 spike in Arizona 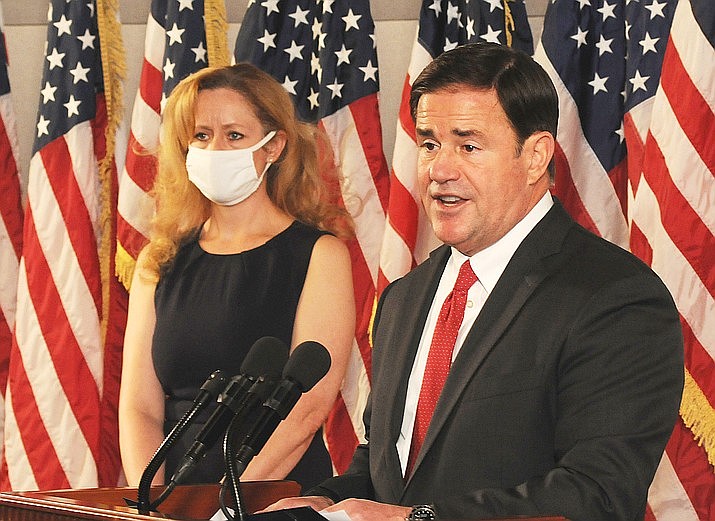 Gov. Doug Ducey explains why he’s not implementing new restrictions even as he concedes Wednesday, Nov. 18, 2020, that the rate of COVID-19 infection in Arizona is on the rise. With him is state health chief Cara Christ. (Howard Fischer/Capitol Media Services

PHOENIX, Ariz. - Gov. Doug Ducey declined Nov. 18 to impose new restrictions or mandates on individuals even as his own health chief warned of an increasing number of Arizonans becoming infected with COVID-19.

The governor dismissed the idea of a statewide requirement for people to wear masks while outdoors, calling it unnecessary given various local ordinances. Nor did he clamp down on existing occupancy limits at bars, restaurants, gyms or movie theaters or seek to curb their hours of operation.

In fact, the one key announcement he made Wednesday, Nov. 18, was to provide $25 million to hospitals. But that is designed to allow them to hire more staff to care for those who become ill and give bonuses to existing employees.

And given the picture painted by Cara Christ, they will need it.

The health director said more than 10% of the tests conducted last week in 13 of the state’s 15 counties have come back positive for the virus, with only Pima and La Paz below that figure. And the rate of infection is above 100 per 100,000 residents throughout the state.

On top of that, Christ said, the number of COVID-19 patients in intensive-care units also is on the rise.

“These metrics are heading in the wrong direction,’’ she said.

So what works? Christ put in a plug for masks based on new research by the federal Centers for Disease Control and Prevention.

“We know now that masks provide more protection than previously thought,’’ she said.

But Ducey said he has no intent of imposing a statewide mandate for people to wear masks when they are outside, even following pleas from state schools chief Kathy Hoffman and Phoenix Mayor Kate Gallego.

He said, though, a statewide mandate is unnecessary because local mandates already cover about 90% of the population. And Ducey said that the efforts by his administration to convince people to mask up “has got the maximum amount of compliance.’’

Then there’s the issue of enforcement of a statewide mandate given the kickback from some communities and counties that have either rescinded their mask requirements or never put them in at all amid public opposition.

“What I want to avoid is some of the division and politics that have happened around this issue,’’ the governor said, saying he prefers “participation and cooperation.’’

But the Institute for Health Metrics and Evaluation says just two thirds of Arizonans are masking up in situations where they are exposed to other.

And there’s something else.

IHME predicts that doing nothing -- meaning no change in the law -- will result in about 118 deaths a day by the end of January. By contrast, the researchers say that could be cut in half with a statewide mandate.

Ducey did announce he wants Christ and her department to work with officials at the state’s three main airports -- Sky Harbor, Mesa Gateway and Tucson International -- on what he called “inbound messaging’’ for passengers arriving from elsewhere “around the importance of wearing masks and information on where travelers can get tested.’’ He also wants the airports to set up on-premises testing sites available to travelers when they land.

But here, too, there are no mandates on visitors to get tested -- or what happens if a test comes back positive. Instead, the governor said he anticipates that people will do the right thing on their own.

“We believe that if there’s testing that’s available and it’s easy with a rapid response, we’ll have more participation,’’ Ducey said.

“I have a lot of faith in Americans that if they realize that if they were positive or exposed to the virus in a significant way that they would quarantine,’’ he continued. “We just want to give them a way to know that.’’

Ducey did agree with Christ’s assessment about things not getting better in Arizona any time soon.

“That’s not on the horizon,’’ he said, saying the state and the nation remain in a public health emergency. “And getting back to normal isn’t in the cards right now.’’

Yet Ducey made another push for getting kids back into the classroom.

“I think children should be in school,’’ the governor said.

“I want parents to have options,’’ he continued. “And one of those options should be in-person learning.’’

What it comes down to, Ducey said, is what he believes is in the best interests of children, even as schools have wrestled with how to provide instruction and keep the youngsters and staffers -- and, by extension, their families -- safe.

“Despite the best efforts of teachers and parents, no one can argue: Kids have already missed out on far too much learning due to this pandemic,’’ he said.

The governor said that having schools open for learning does not mean compromising safety.

“They’re already required to have mask policies,’’ he said. And Ducey said that Christ will be issuing an emergency directive designed to ensure those policies are followed not just in the classroom but also on school grounds and buses.

Christ also addressed the news on the national level about progress in developing a vaccine, saying she is anticipating having some available by the beginning of next year. But that, she said, will require navigating some logistical hurdles.

One is that this is going to be a two-dose series. That means whatever version someone gets the first time has to be the exact same version for a second shot anywhere from 21 to 28 days later.

And that, she said, will require the ability for her agency to call people back to remind them of the need for that second dose.