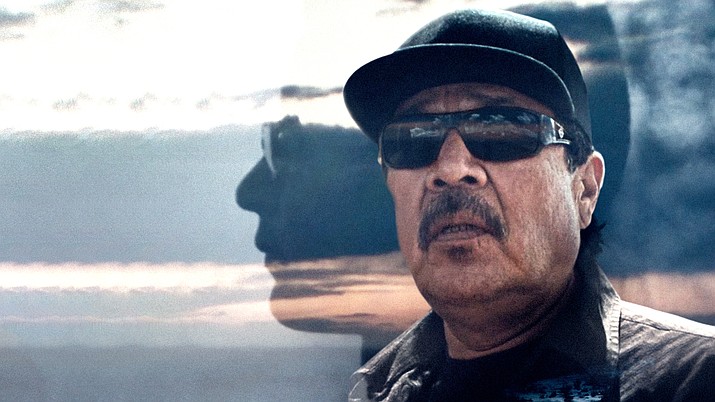 Lawrence (above), a Navajo coal miner, tells his story in ‘The Blessing,’ which will show Nov. 24 on the World Channel and its PBS affiliates. ‘The Blessing’ is one of many films being shown on World Channel during Native American Heritage Month. (Photo courtesy of The Blessing)

A new film, ‘The Blessing,’ from directors Hunter Robert Baker and Jordan Fein, follows Lawrence, a Navajo coal miner, struggles with working for one of America’s largest coal producers and keeping true to his culture as his job makes him a part of the destruction of Black Mesa, a mountain sacred to his people.

As a single father who was forced into a fostering program with a white family when he was 9-years-old, the film captures Lawrence’s efforts to build a stronger relationship with his sensitive and quiet daughter who juggles high school life and academic dreams with deep secrets about her own identity.

Fein said the film captures more or less the last years of the Navajo Generating Station and the Kayenta Mine — the directors spent many hours in both places with Lawrence — and, with the political climate around coal and its demise, they knew there would be a story there, but what they show is not the political side.

“I think what you’ll see in our film is where it hit closest was home and in the personal,” Fein said. “I think that’s why people have really been drawn to this film. It’s not necessarily an overview of politics… or of economic issues. It’s about where do people intersect with those issues. What happens to communities that have change happen through external forces?”

For the directors, it was not so much about why they wanted to tell the story. For them the question was, why did Lawrence want to tell his story?

“When you make a documentary, it’s about trust,” Fein said. “Why does someone let you into their homes, into their lives, into the intimate corners of their minds?”

They were surprised and delighted when the director of the Institute of Indian Arts (IAIA) in Santa Fe said ‘I’ve never seen a documentary so intimate and personal.’

“Crossing the thresholds of the homes of people on reservations

from people who are not from there is not typical,” Fein said. “Why does someone share? Why does somebody choose to let a very intense relationship to be formed?”

The answer may be, the two directors said, that no one asked Lawrence about the things that were happening for him and to him and the decisions he had to make in response.

“The reality of life as a Navajo person in the modern-era and moreover how much he valued making sure his traditional ways were kept on by his family,” Fein said. “These things that have helped him through hardship, whether that’s his career, his appreciation for his animals or his homestead, having a place in his community, were so much more important than the struggles that ultimately crept up.”

In the film, Lawrence has to confront a deep spiritual sacrifice where he is destroying sacred land, and providing for his family, but the questions is, what is the cost to him personally?

Baker said the relationship that developed between the directors and Lawrence and his daughter, Caitlin, is familial. Because they have known Lawrence for seven or eight years and they were given unprecedented access to his life, you can see that closeness in the film, which was shot over five years.

Baker said when they first met Lawrence, he was at a crossroad in his life — his wife had left a few years previously, he was a single dad (a story you don’t hear much about), on the reservation taking a care of a whole family of kids by himself and he was a coal miner — going to work every day, hurting a sacred mountain to provide for his family.

“We arrived in his life at this crossroad, not only was the climate changing and the coal industry, but his personal life was really changing and making a turn actually for the better,” Baker said. “Lawrence was coming out of a number of hard years dealing with a lot of personal issues and he was ready to tell his story in a major way.”

He came to Fein and Baker wanting to talk about what had happened in the past in his life from the Mormon placement program in the 1970s, to his whole life as a coal miner and his changing family and work life.

“He wanted to share all of that with us and bundle it up and give us the most potent description of his life as he could and that’s what he did,” Baker said.

And through that connection, they also met and filmed Lawrence’s daughter, Caitlin, who had her own personal story that she was struggling to share with her father.

“She trusted us to tell us things that she couldn’t even tell her dad at first,” Baker said. “We really treasured the things that were shared with us and the responsibility of that and to use it in the most respectful way possible to the Navajo people and to Lawrence and his family.”

One other aspect of ‘The Blessing’ which is worth noting is that the only voices the audience will hear are those of Lawrence and Caitlin.

In addition to streaming on worldchannel.org, https://worldchannel.org/episode/arf-blessing/, as part of America ReFramed, 'The Blessing' will also be available to stream on amdoc.org, the online home of American Documentary Inc. and on LinkTV.org and all station-branded PBS platforms including PBS.org, and on PBS apps for iOS, Android, Roku, Apple TV, Amazon Fire TV and Chromecast