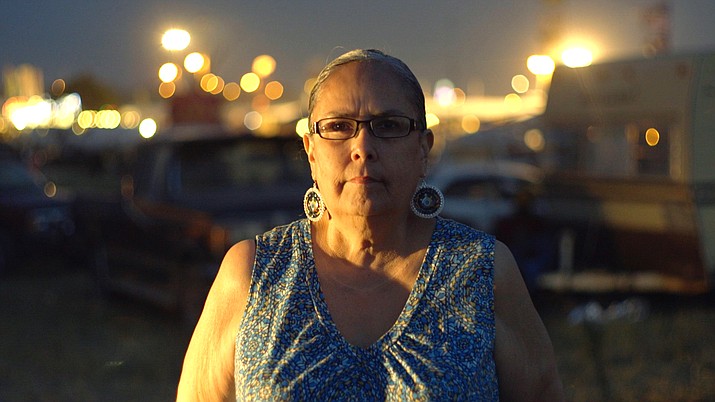 ‘Blood Memory’ is one of many films being shown on World Channel during November to honor Native American Heritage Month. Left: Sandy White Hawk (Sicangu Lakota) at the 139th annual Rosebud Fair and Wacipi. (Photo/Bryan Heller)

On Nov. 11, the channel will also feature ‘The Peoples Protectors and ‘Choctaw Code Talkers.’

The films will air on World Channel and stream on worldchannel.org, premiering on Nov. 17 at 8 p.m. (ET) as part of the series America Reframed.

‘Blood Memory,’ by filmmaker Drew Nicholas, looks at America’s Indian adoption era and its historical injustices and ramifications today. The documentary focuses on Sandy White Hawk, an adoption survivor and her work to connect with her own past and heritage and how that leads to her work toward communal healing and helping fellow Native American adoptees start the healing process and address the trauma that was forced upon them.

Nicolas said the film has been cut for broadcast, from 1:50 minutes to about 56 minutes.

“Basically, for the broadcast version, we really focused in on Sandy White Hawk’s story of removal and return,” Nicholas said adding that the full length film also follows an indigenous man who challenges the Indian Child Welfare Act, a law that is meant to protect Indian kids.

White Hawk was in her thirties when she finally reconnected with her tribe for the first time, after being adopted though a missionary church on the border of the reservation back in the 1950s.

“She always knew she was from South Dakota, but never had really connected with her family,” Nicholas said. “She had some drug and alcohol abuse through her early days and found her sobriety and through her sobriety started to come home.”

But coming home wasn’t easy and ‘Blood Memory’ shows how adoptees aren’t always welcomed back publically and there is a lot of shame around the issue.

“Shame for the individual, shame for the community,” Nicholas said. “On all sides. Those who had their children taken away and those who are the children who were taken. Her thought was why don’t we have a public ceremony that welcomes our stolen relatives home. That creates space in the community for them.”

A song got made, a ceremony was organized and White Hawk was thrust into the spotlight with it and since then, Nicholas said, White Hawk has been helping other connect and is a force of healing.

“Finally in 2015, her tribe decided to do the ceremony and that is what we film. We use that current time with the ceremony to go back into her memories to retell her story of coming home,” Nicholas said. “You see the other adoptees participating in that ceremony in a very heart wrenching circle where they all tell their experience. And then you see the actual ceremony and it’s almost like it takes place in real time at the end of the film.”

Nicholas said part of his experience was trying to show how something like this could happen through the historical documentation and trying to show things that people had not seen — and that it is still happening today.

“When I would share this history with non-Native people, they’ve always just assumed they knew the history,” Nicholas said. “It’s not that disconnected from what they know. ‘Oh yeah, Native people were erased off the face of the Earth. I’m not surprised.’ But it’s still happening in this bureaucratic way that grew out of those very overt policies.”

Nicholas said in the 10 years it took to get the film where it is today, it was a major healing process for him in addressing colonialism in himself.

“I learned by listening to other adoptees, by them just laying it bare over and over again,” Nicholas said. “There’s no way this film would have been made had I separated myself emotionally from it. That’s been a huge thing in just engaging the community, being a part of the process, being a friend.”

White Hawk uses the word relative to describe those who’ve been removed.

“Instead of ostracizing them as these different people, adoptees or whatever they may be, these are your relatives that you’re welcoming home,” Nicholas said. “I tried, in every interaction, to create that family element, that relative element and be consistent. To not just get what we need and disappear forever.”

If audiences are in an area where World Channel is not carried on a PBS station, they can stream WORLD at www.worldchannel.org. Additionally, ‘Blood Memory’ will also be available for streaming at amdoc.org (the online home of American Documentary Inc.) and on PBS.org, and on PBS apps for iOS, Android, Roku, Apple TV, Amazon Fire TV and Chromecast.