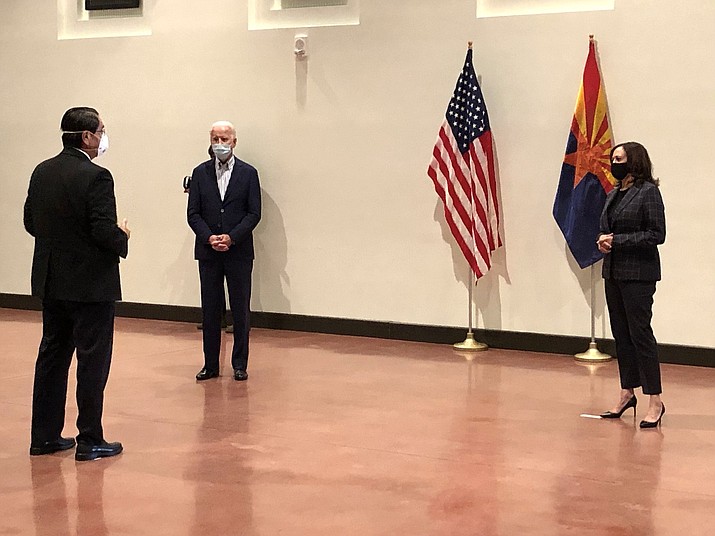 “The people have spoken and change is coming to America. Now that the hard-fought campaign and election have passed, we have to come together, heal, and unite to move tribal nations and the country forward on a positive path,” Nez said.

Nez said the First Americans of the U.S., including a large majority of Navajo voters, had a major impact in the outcome of the presidential election in several swing states.

“In October, I had the opportunity to meet face-to-face with Biden and Harris to talk about the ‘Biden-Harris Plan for Tribal Nations’ and we were assured that tribal nations would always have a seat at the table,” Nez said. “The Navajo Nation now looks forward to working together with the Biden-Harris Administration to put that plan into action.”

During the meeting in October with Biden and Harris, Nez highlighted the need for federal partners to work with the Navajo Nation to move forward with infrastructure development projects to provide clean water, electricity, broadband, and roads for more Navajo people. Among other priorities, he also spoke about the need to improve the health care system for tribes to improve health disparities, supporting economic development, educational priorities, remediating uranium mining sites, water rights settlements, solid waste management, and improving public safety.

“It’s a historic day for our entire country and the Navajo Nation. In the past several years, we have built a strong partnership and friendship with our next First Lady of the United States, Dr. Jill Biden, who helped bring the very first cancer treatment center to the Navajo Nation. I am incredibly pleased to see that the Biden-Harris team will soon be in the White House and I am looking forward to working with their administration and Dr. Jill Biden,” said First Lady Nez.

The Biden-Harris Plan for Tribal Nations states, “Joe Biden and Kamala Harris are committed to upholding the U.S.’s trust responsibility to tribal nations, strengthening the Nation-to-Nation relationship between the United States and Indian tribes, and working to empower tribal nations to govern their own communities and make their own decisions.”

Information provided by the Office of the Navajo Nation President