Reclamation of Kayenta Mine could create hundreds of jobs 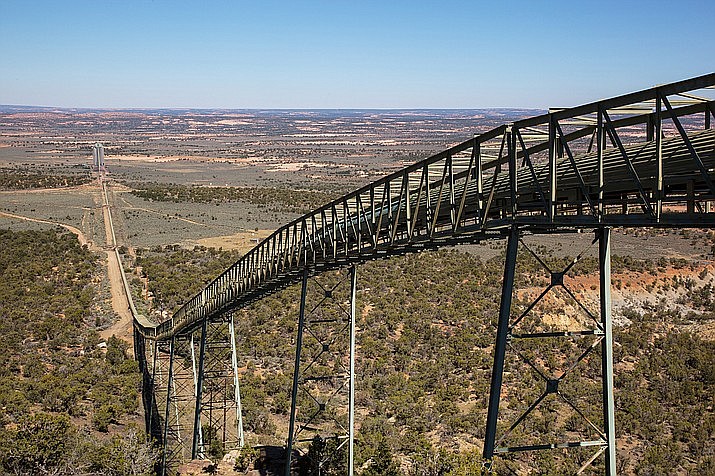 For 50 years, the Kayenta Mine on Black Mesa supplied coal to fire the Navajo Generating Station (NGS) in Page, Arizona. The generating station was closed in 2019, the mine is now being dismantled. (Photo/Peabody Energy)

FLAGSTAFF, Ariz. — The closure of NGS in 2019, resulted in the loss of about $98 million per year in total wages for Native workers, however, a recently released report said reclamation of the Kayenta Mine could bring back 200 jobs per year for the next two to three years for Navajo and Hopi people.

In 2012, nearly 1,000 people were employed by the Navajo Generating Station and Kayenta Coal Mine, with the majority being Native American. Indirectly, the plan and mine operations supported the equivalent of approximately 1,600 full-time jobs and officials expected the plant and mine to generate more than 2,100 indirect jobs for the Navajo Nation in 2020 if the plant remained operational.

According to Kate French, author of ‘Coal Mine CleanUp Works’ by the Western organizaiton of Resource Councils, that equals about 416 job years, which is the total number of people working full-tome for an entire year to complete the job at hand, but that is dependent on how big the project is and how long it will take.

“For the Navajo and Hopi, I think the most important thing to know is that for two to three years, there are hundreds of jobs in clean-up,” French said. “The job creation estimates are a range (because they can be spread out over a couple years and these are based on typical labor cost estimates), but at Kayenta [Mine], there could easily be 200 jobs per year needed to complete the reclamation.”

The report also said among Western states, the number of jobs could reach between 6,000 and 12,000 full-time equivalent jobs over the same two to three year period.

“For comparison, according to preliminary 2019 data, surface mines in the West employed 8,540 workers in 2019,” according to a press release.

“About 350 miners lost their jobs at Kayenta Mine last year when Navajo Generating Station shut down. This report shows up to 200 of them could be back working full time on efforts to reclaim that land over the next few years,” said Nicole Horseherder, director of the Navajo community advocacy organization Tó Nizhóní Ání. “But they’re not because Peabody Energy is trying to push off its reclamation obligations for two to four more years. Navajo and Hopi workers who have been out of jobs for more than a year could be working to restore our lands and waters, but since the mine closed last August, Peabody is just leaving big open pits sitting on our land, and people are still out of jobs at a time when we need it most.”

French said that reclamation for a mine typically includes lots of earthmoving, topsoil replacement and heavy equipment operations, especially in the first couple of years, which are the most labor intensive, while later stages include reseeding and vegetation monitoring.

According to the report, earthmoving comprises the vast majority of reclamation works and cost at any strip mine.

“Earthmoving tasks account for 69 to 89 percent of the direct reclamation costs,” the report found. “Common earthmoving activities include backfilling, grading, and topsoil replacement. There are significant tasks because surface mines are quite expansive and deep with features like spoil ridges, cut-and-fill slopes, highwalls and diversions.”

Only then can the land be backfilled and graded to its original contour.

“Regrading must complement the drainage pattern of the surrounding landscape, reduce erosion and replace surface features like streams,” the report said. “Finally, appropriate topsoil must be replaced so that revegetation can be successful.”

French said many of the workers who worked at the mine were already involved in this type of work.

“The tasks are so similar between production mining and reclamation, that the skillset overlap is really huge,” French said. “The workforce already lives in the area and they are familiar with the site. Plus, it’s just the right thing to do from an ethical standpoint — the work needs to be done anyway and there are workers who would benefit from a few extra years of employment while they figure out their next steps.”

French said the hiring of a local workforce does not always happen.

“In many cases, a mining company can save themselves a lot of money by contracting out the reclamation work and paying terrible wages, or just delaying reclamation altogether,” French said. “But that doesn’t help the community at all — that approach mostly seems to benefit the company executives and top shareholders.”

French said, because of that, it is important that regulators, communities and decision makers hold companies accountable for timely and fully-funded reclamation.

“There are just too many loopholes or ways for companies to game the system, and the stakes are too high to just trust them to do the right thing,” French said. “Plus, we’ve seen coal companies shirk their cleanup responsibilities many, many times. The situation at the Kayenta Mine or with the Blackjewel Mines in Appalachia are just a few examples of this.”

“This is significant because reclamation is one of the few immediately available job opportunities for local workers after a mine shut down, and the report finds that these jobs are ideally suited for current or former miners,” French said.

Ben Nuvamsa, former chairman of the Hopi Tribe, said that Peabody’s negligence in moving forward with reclamation is just the latest example of how coal mining has hurt the Hopi people.

“Coal mining affected the lives and health of the Hopi. It depleted the water supplies we depend on, scarred our land and destroyed important cultural and spiritual resources,” Nuvamsa said. “Holding Peabody Coal and the federal Office of Surface Mining accountable for reclamation and putting Hopi people to work cleaning up the mine is a first step to righting many decades of exploitation. Jobs are hard to come by on our remote reservation, so jobs created to reclaim our land would be welcomed by our people.”

More information on the report is available at http://www.worc.org/publication/reclamation-jobs-report/.

The Western Organization of Resource Councils (WORC) is a network of eight grassroots organizations in seven Western states with 15,000 members, many of them ranchers and farmers committed to common-sense reform in agriculture, oil and gas development, coal mine reclamation, and rural economic development. Headquartered in Billings, Montana, WORC also has offices in Colorado and Washington, D.C.