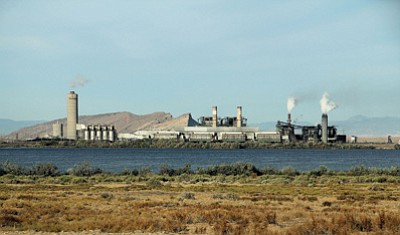 The Four Corners Power Plant will get a $160 million pollution-control upgrade as part of a settlement of a lawsuit over emissions at the plant. Photo courtesy Tony Bennett/APS

ALBUQUERQUE, N.M. (AP) — Negotiations between New Mexico’s largest electric utility and the Navajo Transitional Energy Co. could determine whether the tribe acquires a stake in one of the few remaining coal-fired power plants in the Southwest U.S.

Officials with Public Service Co. of New Mexico, or PNM, said negotiations over the Four Corners Power Plant began a few months ago.

The utility already has regulatory approval to divest itself from the neighboring San Juan Generating Station and exiting the Four Corners plant would move it closer being carbon-free over the next two decades.

Tom Fallgren, PNM’s vice president for generation, said the utility would divest from Four Corners by December 2024 under a proposal that calls for the Navajo Transitional Energy Co. to take over all rights and obligations related to PNM’s 13 percent share in the plant.

“It’s not a done deal, but we’re in the final stages, and we hope to complete it in a couple of weeks,” Fallgren told the Albuquerque Journal.

The New Mexico Public Regulation Commission, or NTEC, must approve any agreement.

PNM Resources, the utility’s parent company, could pay up to $75 million to the tribal company for breaking current contract obligations at Four Corners.

Those obligations would include purchasing coal through 2031 from the nearby Navajo Mine. The Navajo company acquired the mine from BHP Billiton in 2017.

Fallgren would not confirm the dollar amount but said PNM Resources shareholders would pay the entire fee at no cost to utility customers.

NTEC CEO Clark Moseley informed his own board and Navajo President Jonathan Nez and Navajo Council Speaker Seth Damon about the negotiations in an Oct. 16 email.

He indicated that PNM would remain liable for its share of future plant decommissioning and that an audit would be performed in 2024 to ensure the utility can fund its portion of final mine reclamation expenses.

NTEC is owned by the tribal government but run independently by a non-Native executive team in Colorado. It has invested heavily in coal in recent years — acquiring the Navajo Mine in 2017, its current 7 percent stake in Four Corners in 2018 and three coal mines in Wyoming and Montana last year.

Arizona Public Service Co. is the owner and operator of Four Corners, with a 63 percent stake. The Salt River Project owns 10 percent and Tucson Electric Power has 7 percent.

PNM predicts its customers could collectively save about $100 million on their bills with the utility’s early exit from Four Corners. However, customers would still pick up the costs of pending liabilities after 2031, plus the cost of replacing Four Corners electricity with other resources.

Under New Mexico’s Energy Transition Act, the utility must replace its coal and natural gas plants with renewables by 2045.

The law also allows the utility to recover investments in abandoned fossil fuel plants through bonds that would be paid off by customers. The bonds could include about $10 million in economic development assistance for the Four Corners area to offset job and tax revenue losses.

Environmentalist have concerns about the Four Corners proposal, saying it would deepen the Navajo Nation’s reliance on fossil fuels.

“It is understood there is a move to transition in the industry, but we must do it in a thorough and timely way where there is consideration of realistic opportunities that minimizes any negative impact to the skilled Navajo workforce and local Navajo communities,” Nez said.