Statewide curfew begins tonight at 8 p.m. by order of Gov. Ducey
Curfew response to protests across the state, nation after death of George Floyd 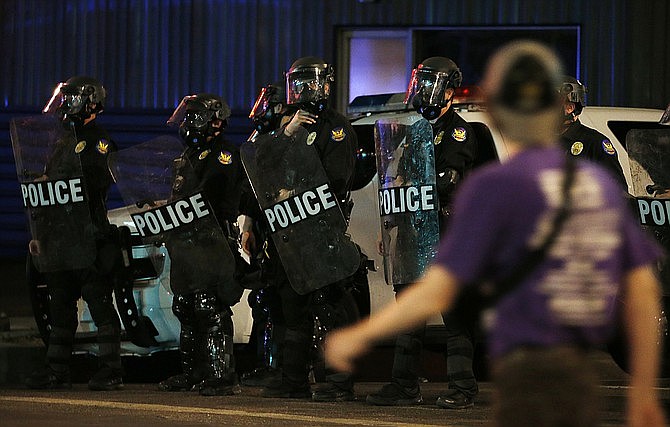 Phoenix Police keep protesters away from Phoenix Police Headquarters May 30, in Phoenix, protesting the death of George Floyd, a handcuffed black man who died in police custody with much of the arrest captured on video of a Minneapolis police officer kneeling on the neck of Floyd. (Ross D. Franklin/AP)

PHOENIX – Saying he needs to act because of "lawlessness,'' Gov. Doug Ducey has imposed a statewide curfew for one week.

Coconino County is encouraging all persons to comply with the Governor’s order and limit any travel during curfew to essential needs for work or public health or safety.

Under the curfew all persons are prohibited from using, standing, sitting, traveling or being present on any public street or in any public place, including for the purpose of travel during these hours.

“Protests have erupted across America in the wake of the murder of George Floyd,” said Coconino County Board of Supervisors Chairwoman Liz Archuleta. “Racism, bigotry, intolerance and xenophobia have no place in Coconino County and are not part of the values that our diverse and multicultural community believes in. This is a foundational belief for Coconino County and one we recently proclaimed again as we condemned the incitement of violence against the Navajo people amid the COVID-19 pandemic.”

According to the governor, public place means any place, whether on privately or publicly owned property, accessible to the general public. That specifically includes public streets, alleys, highways, driveways, sidewalks, parks, vacant lots and any unsupervised property.

Ducey stated that the recent incident in Minneapolis that resulted in the death of George Floyd at the hands of police on May 25 was tragic and abhorrent.

"It should be condemned by leaders at all levels,'' he said.

Ducey, following disturbances in several Arizona cities, said even before he issued his curfew order May 31 that he finds those actions unacceptable.

"The looting and violence we saw last night, especially in Scottsdale, simply cannot be tolerated,'' he said.

"And it won't be,'' he said. "Destruction of property does not qualify as freedom of expression.''

The curfew order was taken under the same laws which Ducey said gave him the authority to issue a stay-at-home order and restrict business operations because of COVID-19. Violations are a Class 1 misdemeanor, carrying up to six months in jail and a $2,500 fine -- aside from any other charges that might be leveled against those arrested.

But there are broad exceptions, including for people going directly to and from work, attending religious services, trucking and delivery services and caring for a family member, friend or animal.

And there are several large loopholes, including patronizing or operating private businesses and obtaining food.

"If you're going to Jack in the Box, you can go out,'' acknowledged gubernatorial press aide Patrick Ptak. He said this is not a loophole for people to use who really want to cause disturbances.

Ptak said there was looting, rioting going on around Scottsdale May 30 and said the governor's order is designed to proactively prevent that.

In issuing the order, Ducey said in a Twitter post that it gives law enforcement an additional tool to prevent the lawlessness we have seen here and in cities nationwide.

"Police will be equipped to make arrests of individuals who are planning to riot, loot or cause damage and unrest,'' he said.

As part of the state of emergency, a limited curfew is imposed for the entire state beginning at 8 p.m. Sunday, May 31. The curfew is from 8 p.m. to 5 a.m. the next morning.

The order will expire Monday, June 8, at 5 a.m., unless further extended.

During the hours of curfew, all persons are prohibited from using, standing, sitting, traveling or being present on any public street or in any public place, including for the purpose of travel, with the following exemptions:

All law enforcement, firefighters, paramedics or other medical personnel, National Guard, as well as any other emergency response personnel authorized by the State of Arizona, and credentialed members of the media.

Individuals traveling directly to and from work; attending religious services; commercial trucking and delivery services; obtaining food; caring for a family member, friend, or animal; patronizing or operating private businesses; seeking medical care or fleeing dangerous circumstances; and travel for any of the above services.

For purposes of this order, “travel” includes, without limitation, travel on foot, bicycle, skateboard, scooter, motorcycle, automobile, or public transit, or any other mode of transporting a person from one location to another.

For purposes of this order, “public place” means any place, whether on privately or publicly owned property, accessible to the general public, including but not limited to public streets and roads, alleys, highways, driveways, sidewalks, parks, vacant lots, and unsupervised property.

For purposes of this order, “exempt care” means necessary medical services for an individual’s self or family member.

The Navajo-Hopi Observer contributed to this report