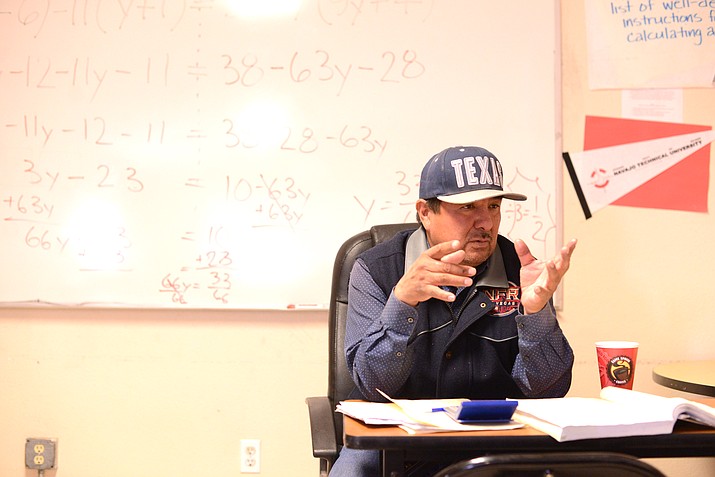 Thompson was named NTU’s Faculty Member of the Year in 2015 for his work in the classroom teaching Diné Studies and Mathematics. (Photo/NTU)

CROWNPOINT, NM — On May 16, Navajo Technical University (NTU) received word of the passing of Mr. Frederick Thompson, a committed and passionate faculty member who taught Mathematics and Navajo courses at NTU’s Chinle Instructional Site for over nine years.

Originally from Lukachukai, Arizona, Thompson resided in Chinle, Arizona, with his wife Rhonda and their children. Thompson was hired in January of 2011 as a lecturer of Mathematics.

“The Navajo Nation has lost a valued educator,” expressed NTU provost Dr. Colleen Bowman. “Our university will miss his wisdom, laughter and teachings. I will miss his committed passion for the classroom and his drive to make a difference.”

Thompson graduated from Chinle High School and worked as a Water Systems Operator for Navajo Tribal Utility Authority before he attended college at Diné College in Tsaile, Arizona and Northern Arizona University in Flagstaff, Arizona. Thompson would go on to earn a Bachelor of Science degree in Education and a Master of Education in Bilingual and Multicultural Education while attending NAU.

An avid fan of basketball, Thompson served as a coach for numerous teams throughout the region, including NTU. While employed with the Chinle Unified School District at Many Farms Elementary in the early 2000s, Thompson also served as the coach for Chinle Junior High’s boys’ basketball team.

Thompson consistently inspired and motivated students to believe in themselves and to reach their highest potential.

Students enjoyed his personality and positive outlook on life and would often fill his classes to capacity.

In 2015, Thompson was recognized for his outstanding services to teaching and received the AIHEC Faculty Member of the Year Award. The award honors and celebrates select Faculty members who exemplify their commitment to students and community. It is an award that is solely nominated and voted on by NTU’s student body.

In addition to his role within the classroom, Thompson was an advocate for higher education. He actively participated in recruitment efforts.

“Our Navajo community had great respect for him,” stated NTU Chinle site director Arlena Benallie, noting that Thompson also participated in university-led fun runs. “During the parade, he used to yell into the mic, ‘Enroll at NTU!’ as people cheered for him.”

In his personal life, Thompson was well-known across the Navajo Nation as the front man of the Ace’s Wild Band. His music provided entertainment for the Diné community for many years, and inspired many youth and adults to pursue their musical interests and talents. Through the decades, he supported countless community fundraising events across Navajo Nation by providing entertainment.

Thompson was also part of Navajo Nation’s rodeo community where he often participated in calf roping and team roping and volunteered as a rodeo announcer.

“He was an excellent artist, cowboy, singer and rancher,” added Benallie.

Dr. Jennifer Wheeler, Chair of Faculty at the Chinle Instructional Site, noted that Thompson also valued Diné language, culture and history and incorporated those philosophies through his lectures to students.

“I attended his Navajo History class a few months ago while he was sharing oral stories of Changing Woman and Monster Slayers,” explained Dr. Wheeler, emphasizing his use of the Diné Philosophy of Education in his teaching methodologies. “His passion about who we are, as Diné people, was very evident.”

NTU Dean of Undergraduate Studies Dr. Casmir Agbaraji added, “Mr. Frederick Thompson was a humble and dedicated man. He was passionate about his work. Fredrick will be greatly missed by the NTU community. May his gentle soul rest in perfect peace.”