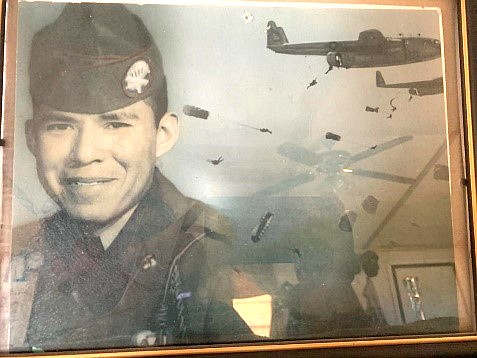 After graduating from Fort Wingate High School, Frank was drafted into the United States Army during the Korean War from 1953 – 1955, he served as an Army Paratrooper; he re-enlisted into the United States Air Force from 1956 – 1962, he served as an Airman Third Class, Airplane Mechanic, working on B-52 Bomber planes. After being honorably discharged from the Air Force in 1962 he married his lovely wife Nancy Allison and begin his 34-year career working for the Bureau of Indian Affairs as an Electrician until he retired in 1996.

Known to all of us as Papa Frank, he often told stories of his military career as a paratrooper and Airplane Mechanic working on B-52’s, was a third generation descendant of Chief Manuelito, member of Tohatchi Veterans Organization and received many honors for his exemplary military and government service. He would often be seen reading the newspaper, loved drinking hot coffee even in the hot summer months, loved watching sports (literally) every sport, and especially loved his grandchildren with all his heart and often expressed being VERY PROUD of them all.

Until we meet again.

“Well done, thou good and faithful servant, enter thou into the joy of the Lord.” Matthew 25:21