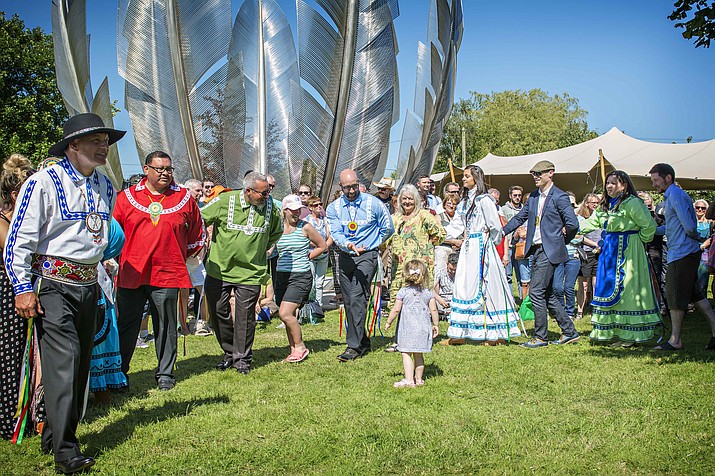 Chief Gary Batton leads Choctaw and Irish dancers in the traditional Choctaw Snake Dance at the 2017 dedication ceremony for the sculpture Kindred Spirits in Bailick Park in Midleton, County Cork, Ireland. Donations from across Ireland have been made to the Navajo Nation and Hopi reservation during the global pandemic as a way of paying forward the kindnesss that was given to the Irish people in 1847. (Courtesy of Deidre Elrod/Choctaw Nation)

FLAGSTAFF, Ariz. — When the Navajo & Hopi Families COVID-19 Relief Fund started receiving hundreds of thousands of dollars recently, everyone was surprised, except perhaps the Choctaw Nation, whose original gift to the Irish people 173 years ago, inspired an outpouring of support.

By 1851, one million people had died of starvation and disease, which was one-eighth of the Irish population, during the Irish Potato Famine.

In 1847, the Choctaw Nation gave $170 dollars (historians calculate to about $5,000 today), perhaps identifying with the Irish people’s suffering based on their own circumstances.

Indian Country Today’s Chris Kopacz notes the original donation has since inspired three visits between heads of state in both nations, the construction of an iconic stainless steel sculpture in Ireland’s County Cork, a poetry collaboration between Choctaw author LeAnne Howe and Irish poet Doireann Ní Ghríofa, dance performances of welcome, music that aspires to merge Irish “trad” with Indigenous rhythms, and a scholarship.

Chief of the Choctaw Nation of Oklahoma, Gary Batton, expressed his sentiments about the generosity of the Irish in a statement.

“Adversity often brings out the best in people,” Batton said. “We are gratified — and perhaps not at all surprised — to learn of the assistance our special friends, the Irish, are giving to the Navajo and Hopi nations. Our word for their selfless act is ‘iyyikowa’— it means serving those in need. We have become kindred spirts with the Irish in the years since the Irish Potato Famine. We hope the Irish, Navajo and Hopi peoples develop lasting friendships, as we have. Sharing our cultures makes the world grow smaller.”

The sentiment is not lost on the team leads for the Navajo & Hopi Families COVID-19 Relief Fund, a grassroots effort built specifically to serve those in need on the Navajo and Hopi reservations who lack access to food, electricity and running water.

The generosity of the Irish

Naomi O’Leary, a reporter for The Irish Times, is largely responsible for calling attention to the need on the Navajo and Hopi reservations to the Irish people. In tweets and a story, she called attention to the fund and also called for action from her people.

When the Irish community responded, the fund managers were at first confused.

“Vanessa Tullie started noticing the influx of donations from Ireland and said, ‘Hey, is our account being hacked?’” said Cassandra Bega, communications lead for the group. “We started looking into it, we started reading the comments.”

After some research and reading the messages accompanying the donations on the GoFundMe page, it soon became clear to the managers that the Irish people were paying forward a gift given almost seven generations ago by the Choctaw Nation.

The messages accompanying the donations are heartfelt and emotional. They are felt by the people who are working to get help to the Navajo and Hopi people during this pandemic.

“We’ve cried. We’ve been a sobbing mess,” Begay said. “We get it. We’re just so grateful to the Choctaw Nation and grateful to Ireland. It’s a beautiful, beautiful story. It’s one we’ll never forget, we’ll always remember. It’s just a good example of positive things and how we can help each other during dark times.”

“In our darkest hour, your ancestors taught us the meaning of unadulterated altruism —173 years later, it’s not forgotten. It’s very much alive.” - Sean McGarry

Begay said it is even more powerful because the seed was planted 173 years ago.

“That speaks to the power and kindness and understanding the sacredness of our relationships to each other,” Begay said.

Begay also points out that Native American issues are often not seen or ignored, which makes all indigenous nations vulnerable. Even though there is a trustee, the United Stated Congress, it doesn’t always fulfill its obligations to Native nations, which perpetuates the disparity.

“In this particular situation, with an entire country having our back, it feels good to be seen,” Begay said.

She added both the Irish and Native Nations understand what it’s like to be colonized, to experience genocide, to go hungry and to be oppressed by people who want to hurt them and by people who don’t want to see them survive because they reap the benefits of getting something from them.

“Even through that sorrow, we still persevere,” Begay said. “We’re still strong. We’re still here. We just wish we could be seen like that more.”

One voice from Ireland

Irishman Sean McGarry is one of the people who does see indigenous nations and he said there is a depth of support and kinship felt in Ireland toward them that shouldn’t be underestimated.

He points out that at the time the Choctaw donated the $170 to Ireland, the Choctaw had already made sacrifices as they struggled against colonialism and identified with the Irish people’s suffering, even though they were far away.

“What [articles] fail to note is that it was also the largest donation received, and from one of the smallest nations,” McGarry said. “In our darkest hour, your ancestors taught us the meaning of unadulterated altruism —173 years later, it’s not forgotten. It’s very much alive.”