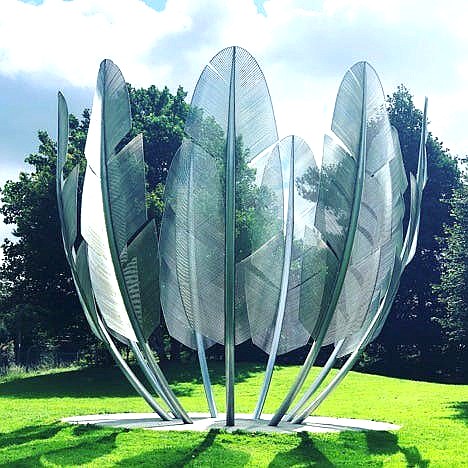 The ‘Kindred Spirits’ sculpture consists of nine stainless steel feathers and towers 20 feet in the air in Midleton, County Cork. The feathers, which form the shape of an empty bowl, commemorate a donation made by the Choctaw Nation to the starving Irish during the 1847 Great Famine. (Photo courtesy of Midleton Town Council)

The $170 donated by Choctaw leaders in 1847 — or “Black ’47,” as the Irish who survived the rampant starvation, disease and exposure remembered it — would today have amounted to over $5,000, historians estimate.

At that time, the Choctaw were still grappling with their own grief and loss, caused by the abuses of a colonial government a decade earlier, and they appear to have seen their own suffering reflected in a people over 4,000 miles away.

The donation has since inspired three visits between heads of state in both nations, the construction of an iconic stainless steel sculpture in Ireland’s County Cork, a poetry collaboration between Choctaw author LeAnne Howe and Irish poet Doireann Ní Ghríofa, dance performances of welcome, music that aspires to merge Irish “trad” with Indigenous rhythms and a scholarship.

Jessica Militante became the first recipient last May, and she now acts as an ambassador between cultures, studying creative writing at UCC. She has visited the Kindred Spirits sculpture in Midleton with friends or family twice, joined UCC President Patrick G. O’Shea for afternoon tea and encountered a wealth of poetry events, short story festivals and open-mic pub readings for creative writing across Cork.

“This has been one of the most incredible experiences of my life,” she said, “Having this opportunity to come to Cork and really get to study something that I love, and also kind of bring a little bit of awareness, even more so, to the connection between the Choctaws and the people of Cork, is something that I never even dreamed about.”

Her favorite part of the experience, however, has been the classes she’s taken. Her writing thrives off receiving different feedback. Militante, who hopes to publish a young-adult novel, finds inspiration in authors like Lorrie Moore and young adult fiction author Rainbow Rowell.

“I think a huge part of stories is being able to empathize with these characters and understand more about situations that you haven’t encountered yourself,” she said. “It’s definitely the idea of solidarity, and being able to look into other cultures and see yourself, and being able to identify when people are in need of that help that you could provide.”

Applicants must complete the second part of the process, which is for the scholarship specifically, by April 15. At that stage the Chahta Foundation would consider applicants comparatively, relying on the submitted resumes and personal statements to make final decisions. It will announce that decision in May.

“We always encourage applicants to spend some time on that personal statement,” said Seth Fairchild, who serves as executive director for the foundation. “There’s so many smart, talented students out there that will be applying for this, as well as our other scholarships, so we just tell them show your personality in that personal statement, show your commitment to the tribe, what it means to be Choctaw, and really let that individuality sort of shine through there.”

The scholarship committee, led by Choctaw members as well as a group from Ireland, is just looking for people it believes will be successful and great representatives for both University College Cork and the Choctaw Nation, Fairchild told Indian Country Today.

So far the scholarship is doing its part to ensure that the story of the Choctaw Famine donation reaches new audiences and continues to grow a legacy, inspiring donations and independent family scholarships from Irish people and people of Irish descent. Fairchild credits the 2015 Kindred Spirits sculpture, a 20-foot-tall assembly of nine magnificent feathers that together form the shape of an empty bowl, with spurring renewed interest over the last few years.

Fairchild had grown up hearing the story himself by word of mouth. “I think it is a way that we remember who we are as a people,” he said. “We are a people who want to come together, we want to help and display that Chahta spirit, so I think it’s remembered as a legacy that our ancestors handed down to us as the type of people that we need to be.”

An ocean apart: Irish donate $670,000 to Navajo and Hopi
The Navajo gift to the Irish: A personal account of my visit to the reservation
Choctaw Nation plaque leads to discussion of bilingual education
A Young Girl’s Wish Comes True
Sovereign Nations Scholarship Fund to benefit Native students
Event Calendar