New Mexico town near vast US reservation shuts everyone out 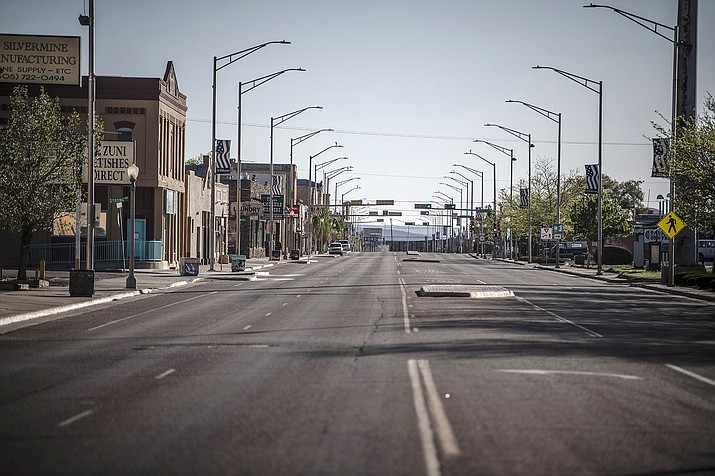 This May 1 photo shows a street in Gallup, N.M., following the governor's order to go in lockdown. New Mexico Gov. Michelle Lujan Grisham is ordering workers at retail stores and restaurants to wear face coverings as a precaution against the spread of COVID-19, starting with larger retail stores and major grocery stores on Wednesday. (Roberto E. Rosales/The Albuquerque Journal via AP)

GALLUP, N.M. (AP) — Like clockwork, payday arrives and tens of thousands of people from the Navajo reservation and other rural stretches along the New Mexico-Arizona border flood into Gallup, a freewheeling desert oasis of just 22,000 that can quickly quadruple in size with all the visitors. 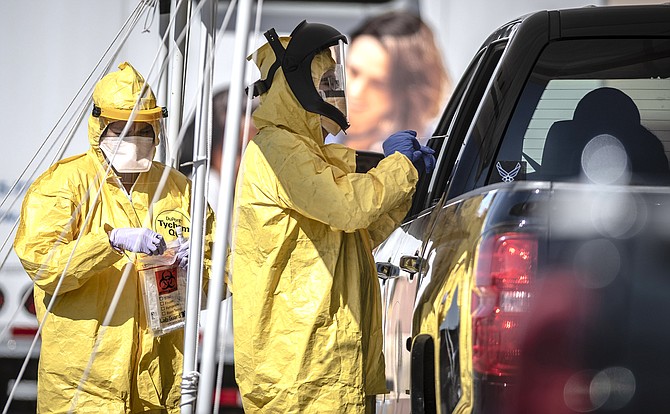 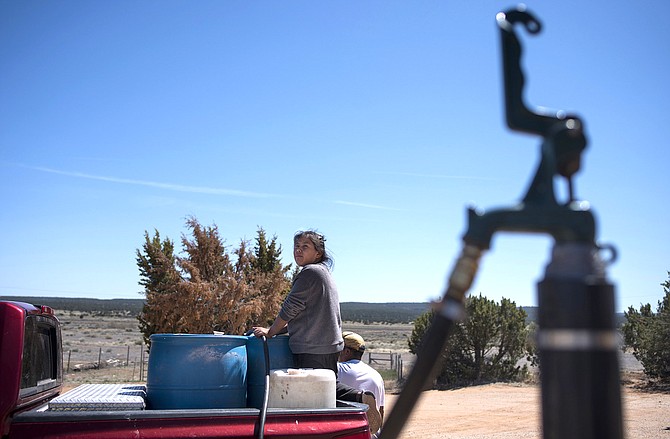 Shileyi Platero, 10, along with her stepfather Leland Barger, fills some water tanks just outside of Gallup, N.M., May 4, before taking back home in the town of Thoreau, N.M. Normally they would travel to Gallup to get supplies including water but they could not enter the town due to the lockdown. (Roberto E. Rosales/The Albuquerque Journal via AP)

As the modern-day trading post reels under a coronavirus outbreak that has infected more than 1,400 and killed 31 in the city and surrounding rural county — overrunning a patchwork health care system — Gallup has gone into extreme lockdown. Barricades are manned by state police and the National Guard keeping out anyone who doesn't live there or face an emergency.

That has sent thousands of people scrambling for options other than the city's coin operated bulk water station and monthly shopping runs to Walmart and Tractor Supply Co. Up to one-third of homes on remote stretches of the Navajo Nation lack full plumbing, and local grocery stores are mostly tiny and limited.

The roads into Gallup may open up May 8 in the evening, but the rules allowing only essential shopping will remain, and the reservation has its own lockdown that prevents people from leaving on evenings and weekends. Navajo police patrol for people breaking the rules.

On May 7, hundreds of cars idled at a roadblock in hopes of entering town, just before the lockdown was extended for three more days under provisions of the state Riot Control Act.

The effectiveness of the lockdown, enacted by the governor and endorsed by Gallup's fledgling mayor, is up for debate. Infections are still mounting unabated inside town, with about 240 infections within one zip code and more than 2,650 on the Navajo Nation that extends into portions of Arizona and Utah. If the Navajo Nation were its own state, it'd have the second highest per-capita rate of positive coronavirus cases in the country, behind only New York.

The dividing line traced by roadblocks also is tugging on sensitivities about birthrights and inequities, as Native American visitors worry about the social stigma of being locked out because of the contagion.

The outbreak on the huge Navajo reservation, the nation's largest with 175,000 people, have made people in Gallup nervous. Many see hints of the long-running racism that has divided people in the town for centuries.

"They targeted the people around here. They're going to be coming to Gallup to shop, so they put a stop to that," said Johnnie Henry, who said two of his relatives on the Navajo Nation were apparently infected with COVID-19 while working at a hospital in Gallup. "We kind of look at each other and say, are we the ones bringing it? No, it's all over. There's a lot of people who want to go back into Gallup, but they're afraid that they're going to call us names ... say that we are the carriers."

Inside Gallup, the streets are empty, with downtown thoroughfares largely free of cars. The lockdown idled pawn shops, halted informal jewelry sales by walking vendors, and thinned out crowds to a trickle at grocery stores and Walmart.

"The lockdown has been awesome, you don't have to worry about any crowds," said Andrew Sandoval, a delivery worker for Home Depot, as he ducked into a grocery store to buy his wife a cup of coffee.

At Gallup's main hospital, Rehoboth McKinley Christian, the battle against the virus has taken a toll on staff, with 32 infections among employees. The hospital's sole pulmonologist left May 6 without a replacement, and patients with serious respiratory conditions are being flown to Albuquerque, said Chief Medical Officer Val Wangler.

Meanwhile, the trajectory of the pandemic could hinge on Gallup's homeless population — many of them castaways from the Navajo Nation who are afflicted by alcoholism.

Infections raced through a detox center in early April. Now, free room and board are being offered at four local motels — including the famous El Rancho hotel visited by legendary actor John Wayne and President Ronald Regan — to about 140 homeless patients who are quarantined. They are tested repeatedly before being cleared with a certification card that can let them back into shelters.

Beyond Gallup, New Mexico's statewide stay-at-home order and restrictions on nonessential businesses expires May 15 with uncertainty about what comes next.

"I'm so confused. What is going to really work, if this doesn't?" said state Sen. George Munoz of Gallup of the community lockdown. He has taken to buying giant pallets of bottled water for indigenous communities with campaign funds. "I don't know the answer."

Physician Caleb Lauber opens a conversation with one coronavirus-positive motel border in the Navajo language before administering a nasal swab test to see if the infection persists.

"There's more than one benefit from doing this," he said. "It allows us the opportunity to ensure that the community is protected."

The program also is financially unsustainable, he said.

"The ideology is good and it makes sense, we just don't have the funds."

South of Gallup at Zuni Pueblo, a tribal community of 800 residents set amid red rock mesas, Lt. Gov. Carleton Bowekaty voiced enthusiastic support for extending the Gallup lockdown further, noting that it keeps more pueblo members safely at home. He said the tribe has stockpiled food staples and water to help support tribal members who have to quarantine after coming into contact with the virus.

He said a COVID-19 outbreak at the pueblo is far from contained, with about 55 infections and 2 deaths amid intensive testing, evening curfews and a daytime roadblock aimed at discouraging nonessential travel to and from the pueblo.

An end to the lockdown in Gallup would likely mean stricter restrictions at Zuni, where Bowekaty says tribal members are struggling to come to terms with the need for social distancing in ceremonial life, including burials.

Thoughts have turned to preserving oral traditions that might be lost with more casualties to the coronavirus.

"How do we capture their knowledge if they pass on?" he asked.