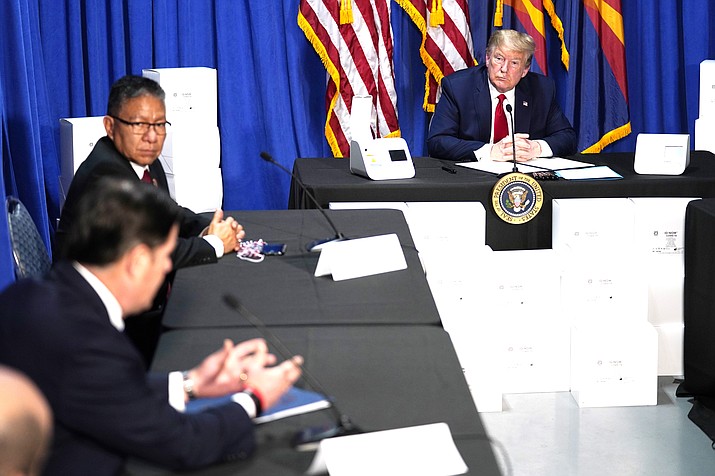 FLAGSTAFF, Ariz. (AP) — The U.S. Treasury Department said May 5 that it will begin doling out billions to help tribes respond and recover from the coronavirus more than a week after a congressional deadline and after being sued over who is eligible for the money.

The $2.2 trillion federal rescue package approved in late March set aside $8 billion for tribal governments. The money was supposed to be distributed by April 26, but the Treasury Department said it was grappling with how to do it.

Tribes sued the agency to keep the money from going to Alaska Native corporations, which own most Native lands in the state under a 1971 settlement but are not tribal governments. U.S. District Judge Amit Mehta in Washington, D.C., gave the tribes a victory last week by limiting the funding to the country's 574 federally recognized tribes while he settles the question of eligibility.

The Treasury Department said it will withhold an undisclosed amount calculated for the corporations until the case is resolved.

President Donald Trump, who met with tribal leaders May 5 during a trip to Arizona, called the funding the "single largest investment in Indian Country in our history."

Tribes had sought $20 billion to stay afloat, respond to the pandemic and recover after having to shut down casinos, tourism operations and other businesses that serve as their main moneymakers.

Payments totaling $4.8 billion will go to tribes over the next several days, based on population. Further payments based on the number of tribal employees and money that tribes have spent responding to the coronavirus will go out later, the Treasury Department said.

"Our approach is based on the fair balancing of tribal needs," Treasury Secretary Steven Mnuchin said in a statement.

The smallest tribes, with a population of less than 37, will receive a minimum of $100,000, the department said. The Navajo Nation, one of the country's largest tribes with about 350,000 citizens, will receive $600 million, Trump said.

The virus has hit the Navajo Nation harder than any other tribe. As of Tuesday, the tribe reported 2,559 confirmed cases and 79 deaths on a reservation that extends into Arizona, New Mexico and Utah.

"Tribal leaders will continue to seek justice, speak out and request funding until tribal governments are made whole with COVID-19 response and recovery funding," he said in a statement Tuesday.

Another lawsuit filed last week by several tribes in Arizona, North Dakota, Oklahoma, Wyoming and California, argues that the Treasury Department cannot hold back any of the $8 billion for tribal governments.

"It's as though the federal government has thrown us a lifeline, but continues to keep it just out of reach," said Robert Miguel, chairman of the Ak-Chin Indian Community in Arizona. "We need fast resolution so we are able to keep tribal members and those from surrounding communities employed and avoid the loss of essential public safety and other services our community relies upon."