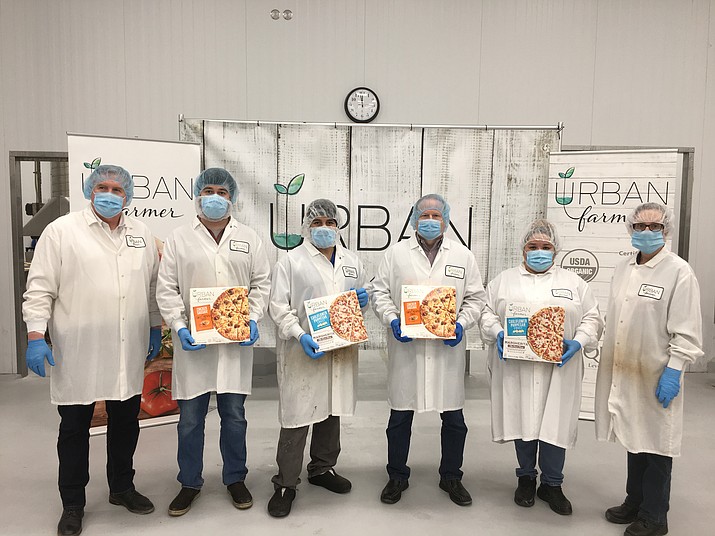 The team at Urban Farmer getting ready to send out pizzas to Tuba City May 4. (Photo courtesy Urban Farmer)

FLAGSTAFF, Ariz. — When it comes to friends, Tuba City Regional Health Care Corporation has some good ones — one of whom will be delivering 7,000 frozen pizza’s for healthcare workers, first responders and to the Western Agency Emergency Response team.

Urban Farmer Managing Partner Ryan Sparrow, from Chicago, said the gesture is heartfelt, even if it does not address some of the issues he knows exist on the reservation — lack of food security as one of them.

Urban Farmer is a privately owned family business. Sparrow said part of its mission is to be a benefit to the community and to their customers.

“And really, all of our customers are nationwide,” he said. “It goes along with our mission statement of having a service and leadership style. If we can help provide in this type of situation for Tuba City, then that’s what we’re going to do.”

T.J. Riggs, director of program development at TCRHCC, said this donation, like some others, was the result of friendships built when the hospital was looking for ways to open the first cancer center on a Native American reservation.

Sparrow’s wife, Michelle, was one of the people who visited the reservation in October 2018 and January 2019. Michelle was a representative of Penn Medicine, Radiation and Oncology Center. During her second visit, she got a chance to visit with a former employee, who was a council delegate.

“She got an opportunity to see how the traditional lifestyle is,” Riggs said. “She got to make frybread. She got to see weaving. She really became attached to our area and became a really good friend. After exploring the reservation, it just became a transformative relationship.”

Riggs said Michelle wanted to know how she could help.

He said Michelle has been instrumental in connecting TCRHCC with her resources to get face masks and hand sanitizer donations and now connecting the hospital with her husband, Ryan, and Urban Farmer.

“It’s just become a really true friendship and, again, it’s one of those examples of how our organization, how we are key in innovating partnerships all over the country that result in personal friendships that have no limits,” Riggs said.

Urban Farmer has also been talking with TCRHCC about food security.

“One of the interesting things that’s happening outside the reservation is that people, as far as hospital staff and their providers, they don’t have to think about food security. It’s not a huge issue,” Riggs said. “But here… the Navajo Nation is in a crisis situation resulting in lockdowns or curfews which prevent our employees being able to go to places to provide for their families, being able to buy groceries. That’s been a huge challenge.”

“They’re really interested in our story,” Riggs said. “Off reservation, it’s not a big deal, but for us, between getting something you prefer to what’s being offered, that’s just a huge thing between receiving something or nothing at all.”

Riggs said internally at TCRHCC, the hospital has been reaching out to organizations to help provide food boxes and essential items to the staff.

“They have really strenuous shifts, 12-hour shifts,” Riggs said. “For those that are working in what we refer to as the Red Zone, those working with the COVID-19 patients, they’re under strict protocol to remain in those areas because we’re trying to limit any cross contamination and trying to keep them safe.”

“Our claim to fame is we figured out how to put cauliflower in cauliflower crust,” Sparrow said. “We’re really trying to recreate the whole gluten-free pizza market. We specialize in vegetable infused pizzas and gluten free pizzas that taste really [good].”

The pizzas will be delivered to TCRHCC May 7 and shared with Navajo Nation first responders and the Western Agency Emergency Response striketeam.

But beyond everything else, Sparrow wants the people on the Navajo Nation to know that there are people across the country who do know what’s going on.