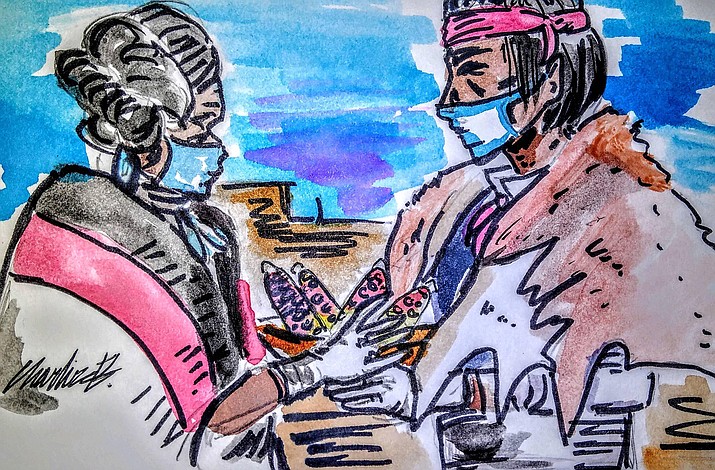 Navajo and Hopi Families COVID-19 Relief Fund is providing relief for reservation elders and families struggling during the COVID-19 pandemic. Seventeen-year-old Charlize Branch provided artwork for the group's Facebook page saying, ‘Everyone needs to work together to fight against this disease.” (Drawing/Charlize Branch)

FLAGSTAFF, Ariz. — With the Navajo Nation under a stay at home order and a curfew and positive corona viruses cases increasing daily, the Navajo & Hopi Families COVID-19 Relief has stepped in to make sure elders and struggling families on the Navajo and Hopi reservations receive help.

Made up of indigenous community organizers, the official group was started March 15 by Ethel Branch, former Navajo Nation attorney general and current Flagstaff lawyer, with a GoFundMe page. The group has raised more than $210,000 (as of March 30) with a goal of raising $275,000 (now $500,000). 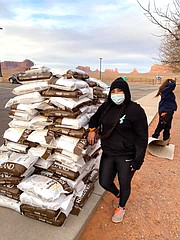 Navajo & Hopi COVID-19 Families Relief prioritizes elders who are raising their own grandchildren as well as struggling families, those who are immunocompromised and single parents. They help by engaging volunteers to purchase groceries, water and health supplies and deliver them to a safe transfer location for the families. By doing so, the group is hoping to protect vulnerable communities from exposure to COVID-19.

Branch called on indigenous community organizers to activate their own networks of people to meet the dire need on the reservations in northern Arizona.

Why is the need dire?

“It’s very urgent that we get to our elders as soon as possible because of the dire situation,” said Cassandra Begay, who is part of the communication team for the group. “Most of the supplies (in those 13 grocery stores across the reservation) are out. It could be very damaging and dangerous for our elders.”

The other problem is the sheer size of the Navajo Nation, which sprawls about 2 million acres across four states. Elders and families who need help often don’t have vehicles to get to a grocery store. About one-third of the population doesn’t have running water. Some do not have electricity. Unemployment was already high on both the reservations, about 50 percent on Navajo and 60 percent on Hopi.

As of March 27, the group had received almost 1,600 requests for help. Most of those requests were from the demographic the group is trying to reach.

Navajo & Hopi Families Relief is also helping to stop the spread of COVID-19 on the reservations by engaging volunteers to sew masks for medical workers and first responders on the two reservations.

“We will use these funds to help purchase the fabric for these masks. And we are helping with the media campaign to get folks to stay home and socially distance and to embrace sterilization practices,” the GoFundMe campaign said.

Volunteers collect food, water and other supplies to deliver to elders and families in need on the reservation. (Photo courtesy of Navajo and Hopi Families COVID-19 Relief)

The group does follow protocol of the Navajo Nation to sanitize supplies and social distancing. Volunteers are handed a health protocol form to follow. The goal is not to spread the virus, but to help those who have no ability get supplies for themselves.

“It’s very important for us to follow those safety precautions,” Begay said. “We operating under the pretense, just assuming that we have each been in contact with the virus.”

The group has also partnered with other groups in different regions of the Navajo Nation like the Rural Utah Project in Bluff to service the seven chapters that are on the Bluff, Utah side of the Nation. There is an operation in Monument Valley. There are other team leads for the group in New Mexico and Kayenta and some in Flagstaff.

The group distributed supplies and food to the Tuba City area, Winslow and the Bacavi, Hopi area.

“It’s been really neat to see the support that we’ve received,” Begay said.

Suppliers include Cisco in Bluff, Utah, who can order in bulk for the group. They are also working on getting Shamrock to help supply needs to other areas of the reservations.

“We’ve had individuals who are buying bulk supplies and working with other volunteers to set up sanitization and distribution,” Begay said. “It’s been very individual group volunteer powered.”

Begay said the core group who are organizing the effort are rooted in their cultures, many were raised on the reservations. And they have fundamental beliefs. For the Navajo it’s called K’é.

“It’s our relations, our family and our community and how we identify with each other and how important it is to be community and to take care of one another. It’s for the people. Our careers are life purpose, to serve our community and our Nation,” Begay said. “I think that’s why we’ve had such a huge success as far as the fundraiser. With the core group there’s a strong sense of trust and compassion and grace and positivity for our community and our networks understand that.”

More information and to volunteer or donate is available on the Navajo & Hopi Families Relief Fund Facebook page or the GoFundMe page at https://www.gofundme.com/f/NHFC19Relief.