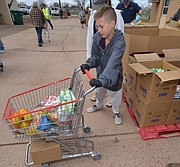 On March 19, the Winslow Rotary held a free food distribution at the First Methodist Church. Rotary President Kevin Coolidge said it had food for 400 families and that they anticipated running out of food before they served everyone in the line. Coolidge said the distribution began at noon, but cars were lined up at 9 a.m. He said next month there will be two food distributions instead of one.