Dr. Emerman: Oak Flat is the ‘worst mining project I have ever encountered’ 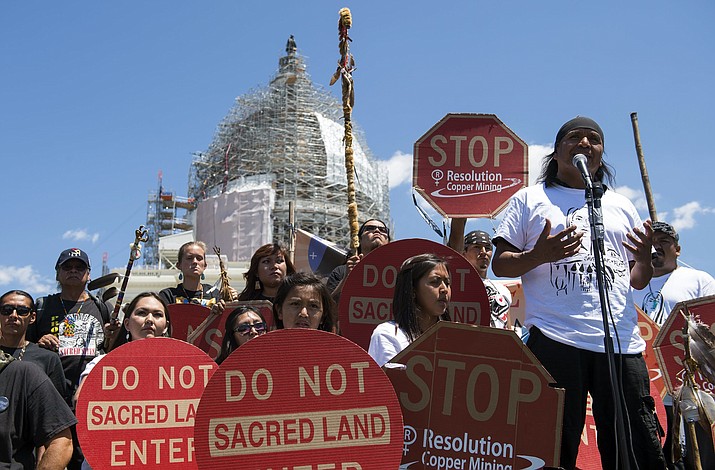 Wendsler Nosie, Sr. speaks with Apache activists in a rally to save Oak Flat, in front of the U.S. Capitol in Washington in July 2015. The land sits on top of a large copper deposit and Resolution Copper Mine enlisted the help of Sen. John McCain. McCain, R-Arz., who attached a provision into a defense bill in December 2014 that transferred 2,400 acres of federal land to them in exchange for 5,300 acres of land owned by the company. (AP Photo/Molly Riley)

OAK FLAT Ariz. — Not all craters are created equal.

Certainly not ones caused by mining say tribal leaders, citizens and environmental advocates in opposition to mining at Oak Flat in Southeast Arizona.

In an effort to save Oak Flat, a sacred area to Apache tribes located in the Tonto National Forest in Arizona, a number of advocates traveled to Washington, D.C. March 12 to testify in a hearing before the Subcommittee for Indigenous Peoples of the United States: “The Irreparable Environmental and Cultural Impacts of the Proposed Resolution Copper Mining Operation.”

Dr. Steven Emerman, an expert in hydrology and geophysics who was a professor of geology for over 30 years and has extended experience with issues related to groundwater and mining, didn’t hold back when he began his testimony.

“I am not anti-mining by any stretch,” Emerman said, “But this is the worst mining project I have ever encountered.”

In a Draft Environmental Impact Statement from August 2019, the Tonto National Forest estimated that a crater 7,000 feet in depth and 1.8 miles wide would be created as a result of the mine.

The proposed project by Resolution Copper LLC, which is owned foreign companies Rio Tinto and BHP Billiton, seeks to extract copper from one of the largest untapped deposits in the world that would “supply the world with the copper it needs to support ongoing technological and environmental innovation,” according to their website.

The Little Shell Tribe of Chippewa received federal recognition earlier this year after being attached to the National Defense Authorization Act.

Despite the land exchange in 2014, the fight to save Oak Flat took a turn for the opponents of the mine in 2016 when Oak Flat became listed on the National Register of Historic Places. While receiving this recognition was certainly a win, it doesn’t mean mining can’t eventually be conducted at Oak Flat.

Naelyn Pike, Chiricahua Apache, is youth organizer for Apache Stronghold and said she was testifying at the hearing on behalf of her generation and generations yet to come. Pike spoke of the connection Apache tribes have had to Oak Flat for centuries, one that continues today and will continue into the future.

In November, former chairman of the San Carlos Apache Tribe, Wendsler Nosie, Sr., notified the U.S. Forest Service that he would be assuming residence at the Oak Flat campground under a religious position and the fact that Oak Flat is the ancestral homelands of his people.

Representative Deb Haaland, Laguna Pueblo, D-New Mexico, asked Nosie, Sr., to expound on his decision to do that and the importance of Oak Flat to the San Carlos Apache Tribe.

He said growing up, his family and elders told him that the United States promised to the Apache people that one day they would be able to return to Oak Flat. After becoming a tribal leader, he saw it as his responsibility to no longer wait for those promises and to return to take care of the land as it should be taken care of.

Nosie, Sr., added he believes the Tonto National Forest has been negligent and is more in line with Resolution Copper than with the tribe.

“I am there to protect and witness what is occurring so that I can explain to the American people, if this goes through, what is a death, what is a murder because that is what is happening to this holy place,” Nosie, Sr. said.

In his very thorough, submitted written testimony, Dr. Emerman wrote that the environmental fallout from the mine was predicted on optimal estimates and not worst-case scenarios. He found similar mines in size and operation around the world that were not allowed to move forward in their given countries.

“Although of course, the U.S. Forest Service would not be bound by any legislation passed in Brazil, China or Ecuador, the proposal for a mining project in Arizona that would be illegal in a developing country should be a cause for pause and reflection.”

The fight to preserve Oak Flat has been ongoing for years and unless the companion pieces of legislation in the House and Senate pass, the fight is likely to continue.

When asked by Rep. Haaland how long she’s been an activist on this issue, Pike said it’s felt like her entire life.

“As Indigenous people, our first breath is fighting,” Pike said.

The hearing can be watched in its entirety at https://naturalresources.house.gov/hearings/the-irreparable-environmental-and-cultural-impacts-of-the-proposed-resolution-copper-mining-operation.