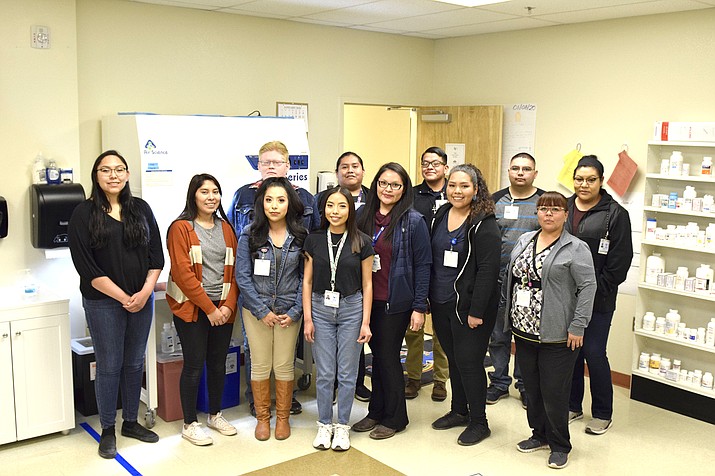 Members of the first cohort of the Pharmacy Technician Program at Tuba City Regional Health Care pose for a photo during a recent class. (Submitted photo)

The need for such a program came about through necessity because of the challenges of staff recruitment and the rural location of Tuba City. Instead of continuing to sit and wait for new recruits to apply for open positions, the corporation took action to grow their own professionals.

“This is an example of how P.L. 93-638 Self Determination health programs are flexible enough to grow our own professionals from our local community,” said Lynette Bonar, chief executive officer of Tuba City Regional Health Care Corp.

Mildred Garcia, chief ancillary officer, explained as a department, they strategized on ways to address the shortage of the vital and critical positions within the pharmacy. Eventually, John Evans, interim director of the pharmacy, proposed the development and initiation of this training program and they ran with the idea.

Evans facilitated the connection with the Vo-Tech program that provided the accredited curriculum and materials, and proposed the idea to the executive committee. It was eventually approved by the corporation’s governing board.

Once the program was approved and funded, they wasted no time and recruited Darcy Brown, a certified pharmacy technician, to initiate the program as its instructor. Brown was then sent to Texas to complete her training.

In October 2019, the program began recruiting participants and selections were made based on a written essay and math test.

“Much to our surprise, we had 34 applicants that came from places as far away as Chinle and Ganado, Flagstaff and from right here in Tuba City,” said Garcia. “It was exciting that this program had such a great response. A selection of 15 participants was made and 12 confirmed acceptance.”

The program required candidates to be 18-years-old or older; have a high school diploma or GED; submit a 500 word essay titled, “Why I want to be a CPT training program participant;” and they also had to consent to a criminal background check, drug and alcohol testing, and submit immunization documentation as required by corporation policy.

Molina Redhorse, a participant, said she is thankful for the program and appreciates the free training.

“The program is no expense out of our own pockets. That is one thing that attracted me to it — it’s free,” she said. “The only thing is we have to commit to is time to the corporation when we are done.”

Redhorse explained she has always had an interest in the pharmacy field.

“It’s a program geared toward my interest,” she added. “I like that it involves a lot of knowledge toward medication and healing people.”

She said it is a great program for the community and for the people.

“Everything is so spread out and rural here. Getting an education off the reservation takes a lot of time and money,” she said. “With this program, we are local, we get an education locally, we learn from actual professionals in the pharmacy, we gain their knowledge, and they provide us a step toward success.”

Redhorse said she also likes the ability to work a full-time job at the corporation during the day and be able to attend the class in the evenings four days a week. This structure helps her with time management since she commutes daily from Cow Springs, a 40 minute drive northeast of Tuba City.

“They work with our work schedule, which is great,” she said. “That’s a win-win for me.”

Derek Davis, another participant in the training program, agrees that the training is convenient. He especially likes the idea of not having to go to an expensive college or university to get the education.

“I was a volunteer when I was in high school at a hospital in Fort Defiance,” he said. “I like to help people get their medication. Pharmacist and pharmacy technicians have an important role in making sure people are healthy by receiving appropriate medications and the right amount.”

Davis plans to gain experience as a pharmacy technician and eventually go to pharmacy school in the future. He appreciates the program.

“We’re the first group to undergo this journey, so I feel honored,” he said.

For Nahida Smith, she just wants to get a start in the medical field because she wants to start somewhere and work her way up.

“I decided to do the pharmacy technician program just to get an insight and to see what it’s like,” she said. “The program is very informative and it’s intense with calculations, formulas and knowledge. I like that it is very complex and very educational, and that’s one of the reasons I wanted to participate and to learn something new.”

Garcia explained the first cohort proved to be a success and the program plans to start another cohort beginning May 11.

The pharmacy serves as an integral part of a comprehensive community-based health care delivery system. Services are patient-centered and directed toward optimal patient care outcomes, health promotion and disease prevention.