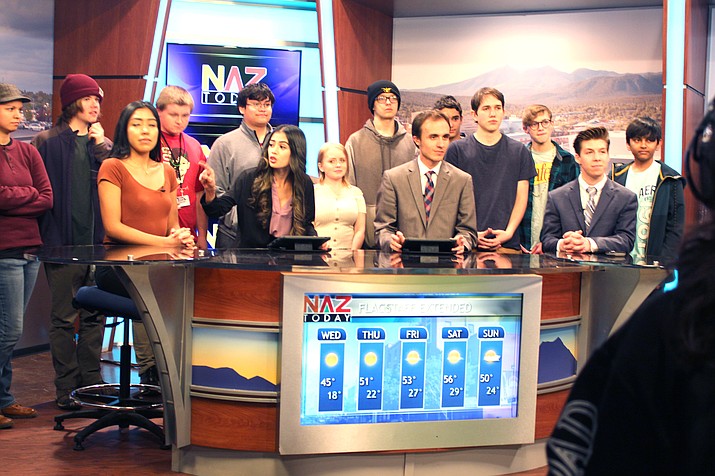 FLAGSTAFF, Ariz. — Northern Arizona University's (NAU) communications department, known as the Media Innovation Center, made itself known on the national scale in two ways as it opened an esports center and won national awards for its news broadcast program.

Giovanni Castillo, founder and director of the Virtual Reality Lab at NAU, which houses the esports center, said esports provides competitive video gaming on a national and international scale.

"It's a big draw for students and gives them a chance to learn about media technology," he said.

Castillo said esports prepares students for jobs in streamcasting, broadcasting, public relations, players, coaches, psychology, sports management and journalism. There are about 60 workers in the Digital Media Lab, which includes esports center, with about half as staff and the other half as NAU students receiving class credit.

Castillo said esports is a business just like other sports where you have to form an organization and have contracts for players and managers.

"We want to form a competitive league, which would bring in sponsorships," he said.

Devlin Nipper, esports coordinator at the Digital Media Lab, said esports also teaches students time management, how to prioritize and how to work in a team based environment.

"There are millions of dollars at stake. The League of Legands (a competitive video game) had close to the viewership of the Super Bowl," he said. "This teaches students how to communicate with people (they) are working with. It's a rapidly growing new industry."

Josh Dingman, graphic designer for esports at the Digital Media Lab, said esports include chess and football among other sports.

"It teaches strategic skills," he said.

NAU's Digital Media Lab held its ribbon cutting for the esports center at NAU Feb. 25. Media students from Mingus Union High School in Cottonwood were in attendance for the event.

Brady Skoch, a film student at Mingus Union High School, said this lab of visual and technological wonders opens opportunities to every student at NAU in the realm of academia as well as good fun and entertainment. He said the media lab captured the minds and attention of the students visiting from Mingus.

The BEA hosts the annual Festival of Media Arts in Las Vegas.

Todd Birch, instructional lab manager for NAU's School of Communication, said they have produced award winning content at NAZ Today for many years.

"We were proud to be recognized once again for all of our hard work," he said.

A NAZ TV newscast usually has a production crew of seven students with news, sports and weather departments providing about another seven for the nightly show.

"The awards give validation to our efforts to teach our students what it takes to produce a live newscast in a classroom setting that mirrors exactly what a real-world television station atmosphere looks like," he said.

Birch said the NAU TV students are proud of their work and were excited to win national recognition.

"The bar is always being set higher and our students are great self-motivators with the awards giving them an extra incentive to succeed," he said. "The awards are not only important for providing a tremendous positive feedback to our students, but they also bring attention across the NAU campus to our program and accomplishments."

"Being able to show them our multiple awards definitely makes for a great selling point to join our program," he said.

Skoch, a digital film student at Mingus Union High School, said the NAU NAZ TV broadcasts "are pretty much the closest thing you can get to the real deal without actually going into a professional newsroom."

He learned that producing a news program is a lot more than just an anchor or two and some camera operators.

"A lot of hard work from a lot of different people goes into the production of what seems like a simple 28 minute news segment. There is a massive team and thousands of dollars of worth of time and equipment that go into producing something that seems so non-challant," he said.

NAZ is a mostly student run program with two faculty advisors who guide the program on a daily basis. Brian Rackham heads the news side and Birch takes care of the production.